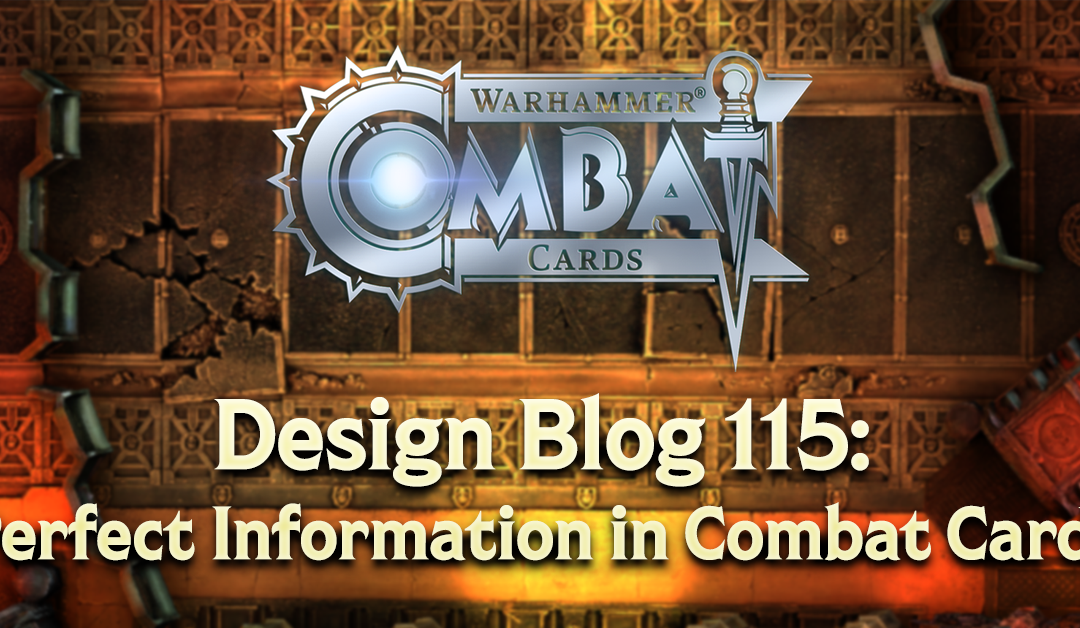 I wrote about randomness in Combat Cards way back in the carefree, could go outside and lick anything we wanted, days of blog post 38. This week I wanted to expand on that by looking at ‘perfect information’, and what that means to videogames.

A game has ‘perfect information’ when players have absolutely all the information available to them, with nothing hidden or subject to chance. Chess is the classic example, because all the pieces are visible and no dice rolling, card drawing or coin flipping is involved. It’s what makes Chess so great for computers to play, because they can calculate out all the possible game states from whatever the board looks like right now – there’s no chance that either player will roll a 1 and have things go in an unexpected direction.

However, in Chess and the vast majority of perfect information games there’s always one variable that you can’t account for – the other player. While you can know all their possible moves and predict what they’re likely to do, you can never be 100% certain.

You see this in Combat Cards through the choices the AI makes when it takes its turn. At the moment the AI is pretty predictable, making it effectively possible to know what it’ll do in various situations (when it ‘gives up’ and starts making psychic attacks, for example). We’ll be upgrading the AI shortly, which will make this sort of behaviour less likely, and it’ll be interesting to see how players react when battles become more about dealing with your opponent’s tactics (though ideally the game won’t become more difficult overall because the matchmaking will react to players losing to a smarter AI by pairing them with less powerful decks. That’s the plan, anyway!).

Another area that currently plays into giving players perfect information is card deployment. At the beginning of battles the AI lays out its three cards first, letting you choose which from your hand to place where, taking into account who’s going first (which you also know). We set it up like this because it’s fun to ‘puzzle’ your way to the optimum solution for the current state of their cards, what’s in your hand, what’s still in your deck, player Initiative, and so on.

But we’re also looking at potentially changing this, perhaps by making players alternate deploying cards or by making whoever has the lower Initiative deploy first. These are just experiments at this point, and we’ll update you if we’re going to change how deployment works, and if we do, exactly why we’re making that particular change.

The upshot of both these potential changes is to reduce the amount of information players have, which sounds weird when you put it like that, but which in turn means players will need to adapt to changing events as battles play out, rather than knowing the best move to make up front.

We’ll see if this slows battles down as players need to think through their options each turn. Or if it makes battles more satisfying once players know they won through good tactics rather than the AI just ‘giving up’. Or even if it leads to metagame changes in deck building as players (for instance) begin favouring faster Initiative cards to try and go first.

Either way it’ll be fun to see how moving away from perfect information shakes things up! Let us know your thoughts on this – you can get in touch by leaving a comment below, through our Facebook page or by mailing [email protected]. Also, if you’d like to follow our posts through RSS you can use this link:  https://www.combatcards.com/feed/