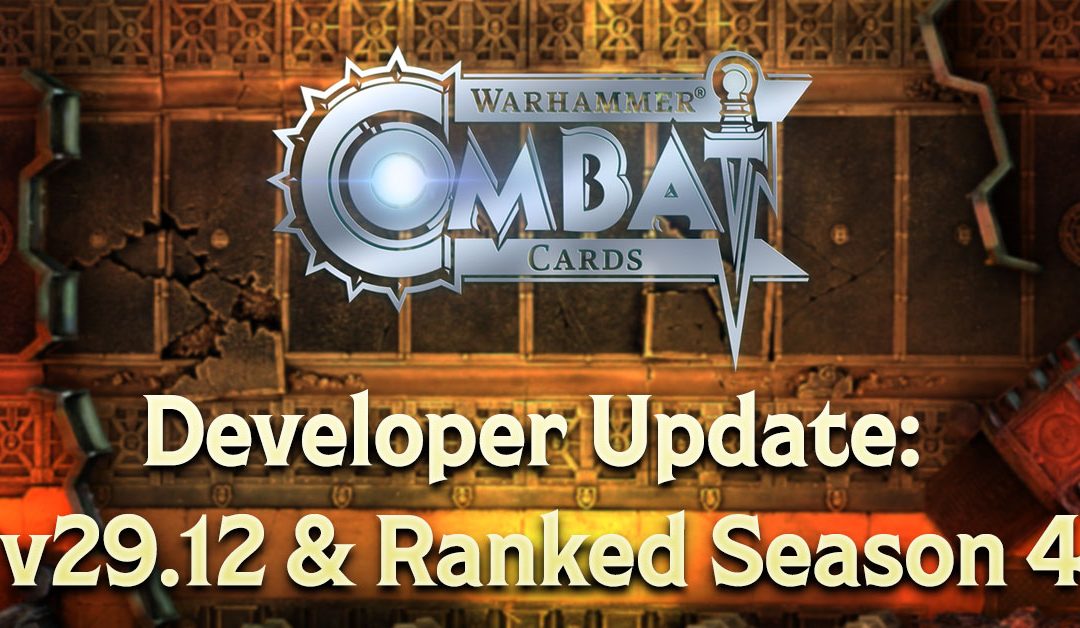 Hi everyone! We hope you’re all keeping safe out there in these uncertain times. What you can be certain of is that the team is still working hard on bringing lots of new features to Warhammer Combat Cards, albeit from the comfort of our own homes! Working from home comes with its own challenges so this update won’t be as detailed as some, but we’re doing our best to keep you informed and ensure you have a fun and rewarding experience.

We’ve recently released v29.12, which should be appearing in app stores soon. This is one of a number of smaller updates the team has released recently, addressing some smaller issues while working on some larger features which will start to appear in the game in the coming months.

We recently released an oft-requested feature in the turn indicator. This allowed people to follow the flow of the game and know which cards to deploy at the opportune moment. Unfortunately there was an issue causing the icon to appear in the wrong place. With this update, this issue should now be fixed and the turn indicator should be on the correct side of the battlefield.

You might also notice a change to where your name sits on the front page. It’s a little bit small on some devices so will be increasing in size soon, but it’s a small change to allow for new things to come. Watch this space…

This week sees the end of Ranked Season 3 on Thursday 2nd April. We will be taking a short break between seasons to deploy some changes to the matchmaking. Alex, one of the designers on Warhammer Combat Cards, gave the following update on these changes:

Ranked mode has been running for three seasons now. We’ve been paying close attention as everyone made their journey towards Terra. Whilst a handful of players are storming to the final arena, the majority are not getting as far as we’d hoped, and we’ve been wondering why.

In a competitive ranked mode, most players are eventually going to reach a point where their progress stalls, where their skill and the strength of their deck are evenly matched by the opponents at that level. That’s exactly what we expected to happen. What we didn’t expect was that most players wouldn’t get very far before reaching that point.

We grabbed all the battle data and crunched the numbers, trying to find out why it was happening. Perhaps players were not playing enough battles? It wasn’t that. Between seasons 1 and 2, we doubled the number of trophies earned per battle. This was to make sure everyone could reach their right level by playing 4 or 5 battles a day. If you play less than that, you will still get there eventually, since you carry some of your trophies into the next season.

To understand why, imagine a player with really strong decks, but with one of their factions they only play a couple of battles. That neglected deck stays in the pool of opponents, but its trophy count never gets any higher. So when the game is choosing an opponent for you, if you also have a low trophy count, it thinks this deck is going to be a great match – but unless you also have a powerful deck, you’re going to get beaten.

That’s an extreme example, but the same thing happens for every faction of every player while they are on the way up. Every faction starts out with fewer trophies than it ‘should’ have, which means very often what looks like a good match turns out to be a tough one. When matches are tougher than they should be, players lose more trophies and can’t get as high up the ladder.

For season 4, we’re attempting to improve this. Our new matchmaking system places less importance on getting a close trophy match, and more on getting the right level of challenge for each battle. What difference will you notice? Mostly, you’ll notice you’re battling opponents whose trophy counts are further from yours. This could make it seem like the matchmaking has got worse, but in fact those opponents should give a more appropriate level of challenge. When your faction starts out, you’ll probably get a lot of easy wins, but as you gain trophies the range of opponents will narrow until you’re evenly matched. Finally, you should find you get a lot further through the arenas than before, so you’ll pick up bigger prizes!

As always, we’ll be keeping an eye on how these changes pan out, and look forward to hearing what you think!

Ranked Season 4 is scheduled to begin on Tuesday 7th April. We look forward to seeing you on the battlefield!

We’re also working on another balance pass to boost cards who don’t see much playtime or reign in those who are over-performing, and we’ll have more details on those changes in the next update.

The team are currently hard at work on a number of features including Clans, new traits, new Warlords, and other things mentioned in last week’s Design Blog. We’ll provide more details on these features individually in future updates.