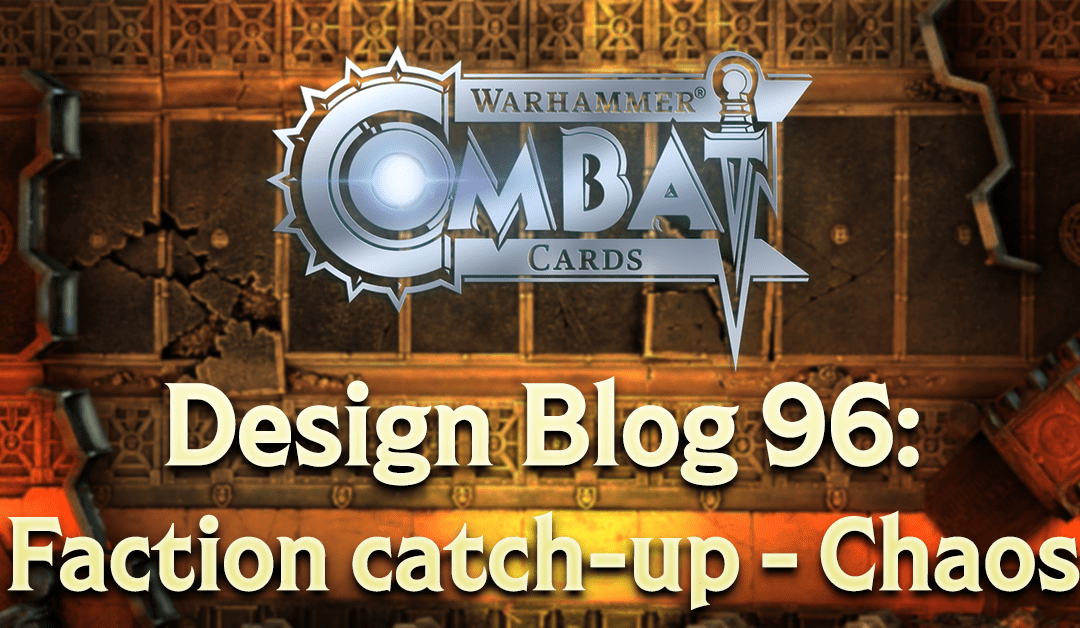 A long, loooong time ago I ran a series ‘faction focus’ blog posts, looking at how each played, their tactics, weaknesses and so on. As it’s been a couple of years I thought I’d revisit each faction over the next few months, alternating these posts with ‘normal’ ones.

The difference this time is that I have numbers I can refer to, rather than just offering opinions and thoughts. Thanks to our analyst, Pete, I’ll be able to give you some interesting stats on each faction, possibly revealing some surprising facts along the way.

So, don your spikiest spikes, summon your daemoniest daemon and let’s look at the Chaos faction.

Decks from the Chaos faction fought 422,473 battles during October 2019, meaning they were chosen by players 9.3% of the time. Note that those stats don’t include Campaign battles when players had no choice on the faction they used, they’re purely for normal battles.

With eight factions in the game you might be expecting the average pick rate for each faction to be around 12 – 13% but the Space Marine faction skews the numbers because new players have no choice but to use them, and as our largest faction (and the most popular army in Warhammer 40,000) it’s inevitable they’ll shift the stats. Basically, we consider the Chaos faction’s 9.3% to be a reasonable number.

In October, Chaos decks won 51.1% of their battles, a number that only rises a couple of percent as you get to the top Rank players. That shows us that players aren’t reliant on getting cards unlocked at top Ranks to make competitive Chaos decks (while you could argue that players may be getting access to those higher Ranked cards early through Rank unlocked packs, it’s difficult to upgrade cards because normal packs still won’t give you duplicates until you reach the required Rank).

In October the Chaos faction dealt 203,755,646 Wounds to their enemies, which should please Khorne. We’ve tried to have each faction more or less match how its’ armies play in tabletop 40K, so I’m pleased to see the following stats:

I think that reflects how a mix of Chaos Space Marines and Daemons would fight on the tabletop pretty well.

Also, Chaos cards attack (instead of Readying to increase an attack for later) 77.8% of the time, reinforcing their aggressive play style.

Finally, let’s look at how many cards of Common / Rare / Epic / Legendary rarity the Chaos faction has:

Which tells us they have 30 cards in total and are short on Epic and Legendary cards. This is something we’ll try to address as we add new cards, so look for a higher proportion of ‘famous’ Chaos miniatures to start appearing in the new year.

Also, the average points cost of a Chaos faction card is 24.5 and it will be interesting to see how that balances out against the average costs of all the other factions.

I hope those stats were interesting and, along with the original Chaos faction focus, give you some idea of how to use Chaos decks in battle. Let me know if you’re surprised by any of those numbers or if any are unclear, otherwise I’ll be back in a couple of weeks to look at another faction.