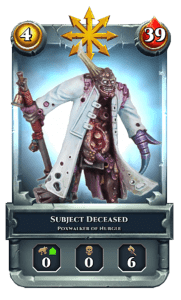 Work in progress example of a Chaos faction card

While it’s possible to create decks with every single card dedicated to Nurgle*, right now the most effective Chaos decks tend to include cards from several gods.

Because of their special rules, more than any other faction, Chaos decks revolve around their Warlord.

I’ll cover Warlord special rules in more detail in later posts, but effectively each faction’s Warlords all have variations on the same special rule. For Chaos Warlords the rule is ‘when this Warlord does X, Chaos cards get boost Y’.

Let’s break that down a little:

Work in progress example of a Chaos faction card

Chaos decks revolve around powerful Chaos Space Marines, backed up by Daemons and cannon-fodder, and depending on the cards chosen, their decks swing wildly towards melee or psychic attacks. Finally – as is fitting – Chaos decks are built around their Warlord, so thought needs to be given as how best to use them.

Chaos decks can already set up some nasty combo’s, and this will only increase as more Chaos cards are added to the game.

* At the time of writing, you can only make purely Nurgle decks because the Chaos Warlords are a Nurgle Lord of Contagion and Abaddon (who can technically be said to ‘belong’ to every Chaos god, but good luck to anyone foolish enough to tell him that).

Over time we plan to introduce Warlords and more bodyguards for each of the Chaos gods, meaning you’ll be able to create decks dedicated to each power.