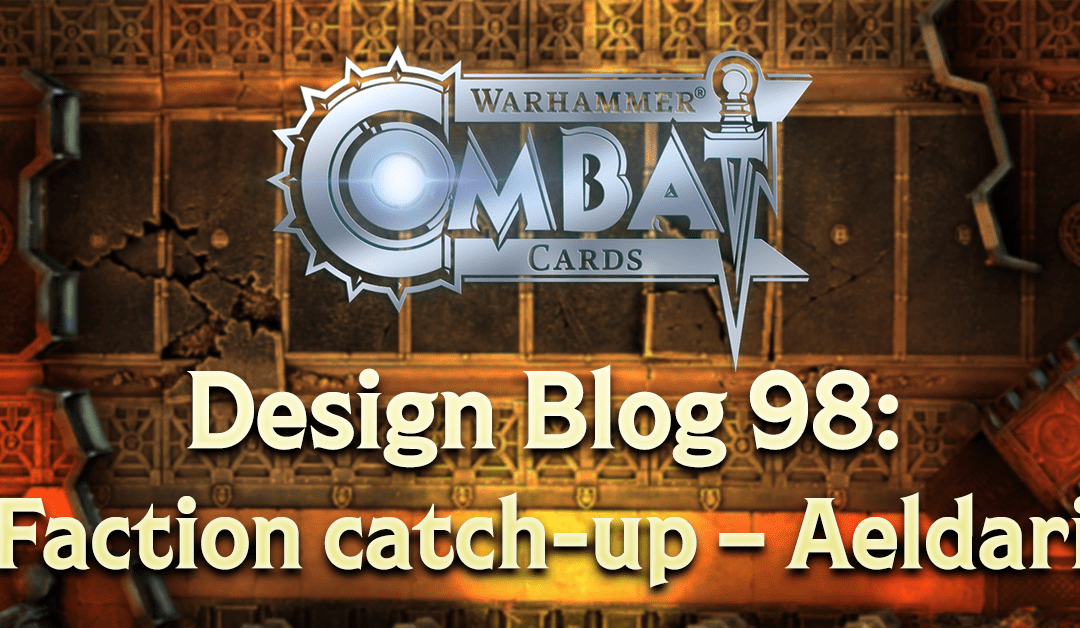 A couple of weeks ago I ran the first in a series catching up with each of our eight factions, using data to look at how the Chaos faction is getting on. This week it’s the turn of the Aeldari, so don your fanciest Wraithbone hat, say something enigmatic and let’s descend into the Webway of data.

The Aeldari have a reasonable pick rate of 10%, which as discussed last time is a normal amount because Space Marines throw the proportions out.

Aeldari decks have a high win rate, defeating their opponents 63% of the time. This makes them the third best faction in terms of win rate, behind T’au and Tyranids.

Two things stand out here, first that the Aeldari are joint first (with the T’au) in being the most aggressive faction. They attack 82% of the time, reflecting that their Warlord special rules reward cards being destroyed over Readying. I like that it also matches how Aeldari armies are hard-hitting but fragile in tabletop Warhammer 40,000 battles.

This immediately shows us that we need to get some more psychic cards into the Aeldari pool, as they should be one of the more psychically active factions. But that aside, compare the stats above to how much damage each of those attack types dealt in October:

So even though ranged attacks are chosen almost as often as melee ones, the melee attacks dealt a lot more damage. This may reflect cards like the Harlequins being popular, or that players may prefer the Avatar over the Autarch as their Warlord.

The Aeldari faction still needs more cards, with only 20 right now, but it does have a good spread of card rarities:

The average cost of an Aeldari card is slightly below most of the other factions at 22.7 points, reflecting that they only have one card costing more than 50 points (the Avatar of Khaine).

This is due to the Aeldari faction having so many infantry types to choose from – including all the Craftworld, Drukhari, Harlequin and Ynnari miniatures – so we haven’t ventured into their expensive vehicles yet.

All this tells me a few things that we need to address:

Anyway, I hope that was of interest, but do let me know if any of the above was surprising or confusing. We’ll be back with another of these faction focuses in a few weeks.