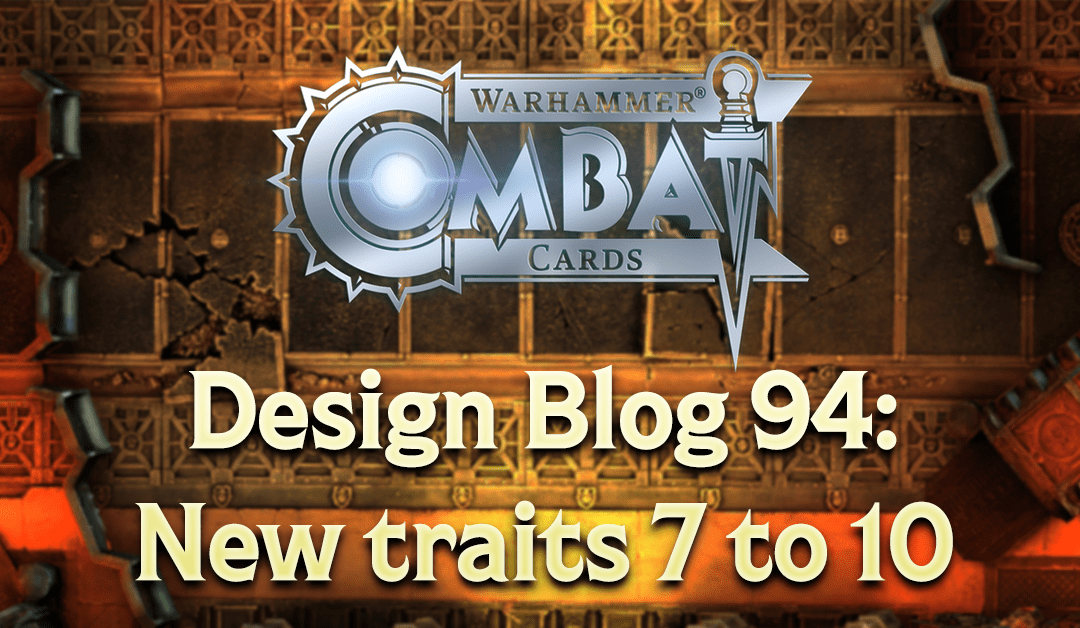 As I’ve mentioned before, as well as working on big new features we’re also making a number of smaller improvements and additions to the game. One of these is to add four new traits to the game, taking us up to 10.

Last week’s blog looked at why we’re adding new traits, so this week let’s focus on what the new ones do.

The six traits we already have in the game are:

Each of these traits improves its effect twice as you keep upgrading that card.

And the four new traits that we’re adding are: 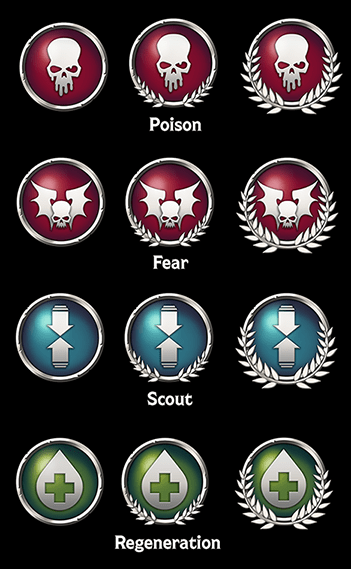 This means there’s a nice synergy in taking cards with the Scout trait who Ready your deck’s key attack type, so they give that attack a big boost just before your Warlord deploys and delivers a devastating hit. Or taking cards whose Ready lowers an enemy attack type, using them to cut the power of their next attack.

Poison – Once deployed, this card poisons the one opposite. The poisoned card loses X Wounds every turn until it dies.

Working in the same way that the current ‘attack’ traits do by ignoring the Shielded trait, this allows you to hit seemingly impervious cards. Poisoning a high Wound card means you deliver extra damage to it every turn, or you could poison a weak card so the extra damage is enough to kill it before it can fight back. I look forward to seeing how players use this trait in battles!

Fear – When deployed, this card applies the ‘fear’ effect to the opposite card. A card suffering from fear delivers less damage with its next attack.

Upgrading this trait increases the effectiveness of the fear effect, meaning the next attack delivers even less damage.

As the damage reduction is percentage based it makes sense to use fear on your opponent’s biggest hitters. It then forces your opponent to either waste a powerful hit or waste a turn making a different attack to remove the fear effect (and of course, cards that can only make a single attack type can’t use that mitigation tactic at all).

Regeneration – When deployed, this card gives itself ‘regeneration’. Cards with regeneration recover lost Wounds every turn for the rest of the battle.

Upgrading this trait increases the number of Wounds recovered every turn.

Regeneration is a straightforward trait, making tough cards even more ‘tanky’. It works nicely with cards that Ready a lot, because now they increase an attack and recover some Wounds (and if they’re Necrons they get an additional bonus every time they Ready, too!).

We’ll post a complete list of which cards are swapping to each of these new traits soon, as the traits roll out over the next few weeks.

We hope that these traits help to shake up the metagame by encouraging players to try new deck builds, and then creating new builds to counter those first new builds (if you see what I mean). So before you complain that a card’s trait changing has forced you to rethink how to use that card, remember that for the long term health of the game that’s kind of the point.

We plan to add more traits to the game in the future, but a) not too often, and b) any card which changed its trait here shouldn’t change its trait again a second time. Basically we had to give every card one of the initial six traits, but that may not be the trait it was ‘supposed’ to have. Over time some cards will swap to their ‘correct’ trait once we add it to the game.