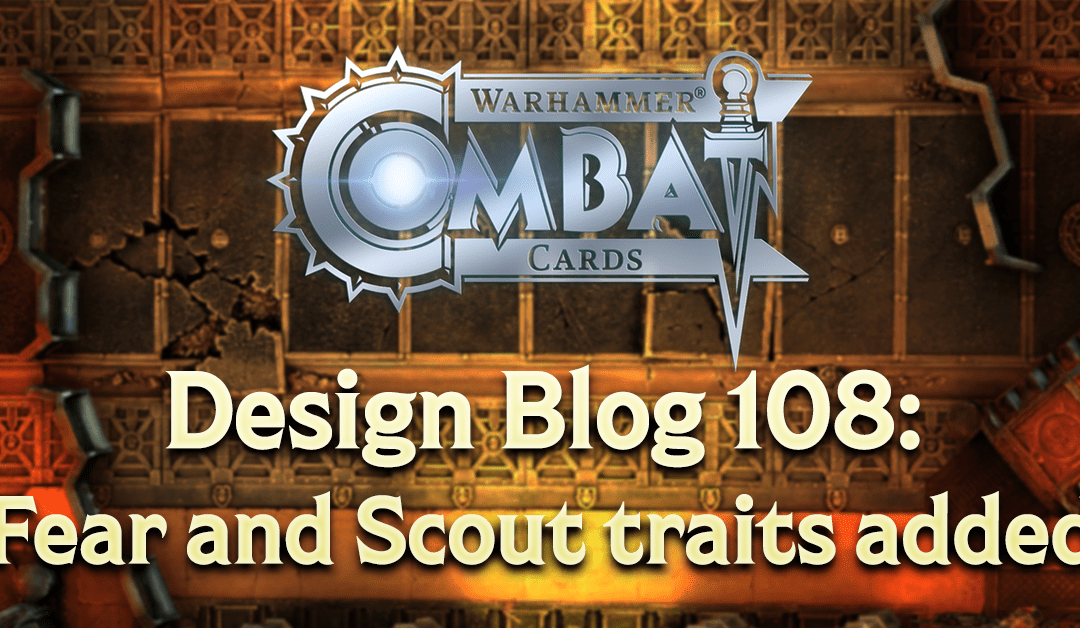 Back in blog post 94 we revealed the next four traits (the one-off events which trigger when a card is deployed) that we’re adding to the game: Poison, Regeneration, Scout and Fear. Poison and Regeneration went in a while ago and as the Fear and Scout traits came online yesterday I wanted to talk about them.

This trait causes the opponent’s cards to deal less damage with their next X attacks (i.e. the damage reduction never changes but the number of attacks which are debuffed goes up as you keep leveling up this card).

As you can imagine, this trait can be useful in a wide variety of situations. If your opponent is set to inflict a lot of damage, or if they’ve been building up a big attack bonus, then deploying a Fear card means they either have to waste a load of potential damage or use different attacks first until they can get the Fear effect to expire. Even the latter outcome buys you time to maybe take out a critical enemy card or redeploy one of your own. Basically, this is a ‘disrupt’ trait which allows you to mess with the enemy’s plan.

Here are the cards which have swapped to the Fear trait:

Deploying a card with the Scout trait gets you an immediate boost to one of your attacks as this card Readies X times (with X increasing as you keep upgrading this card). Although less dramatic than Fear this can be an extremely useful trait, letting you unexpectedly boost an attack right when you need it.

The obvious tactic is to add to an attack you’ve already prepared a boost for, but you can also use it to make two boosted attacks in a row, or even to undo the debuff from an enemy card’s negative Readying.

Here are the cards which have swapped to the Scout trait:

If you’re suprised that a specific card didn’t swap to one of these traits don’t forget that we have plans for 10 more traits underway, and as we don’t want to swap a card from its placeholder to a different trait more than once some are remaining with the old trait for now.

In the meantime it will be interesting to see what effect these traits have on the game’s balance and which new deck builds they unlock (and waiting to see how these changes ripple out is why we aren’t adding a load of traits in one go).

Let us know your thoughts on the new traits. You can get in touch by leaving a comment below, through our Facebook page or by mailing [email protected]. Also, if you’d like to follow our posts through RSS you can use this link:  https://www.combatcards.com/feed/