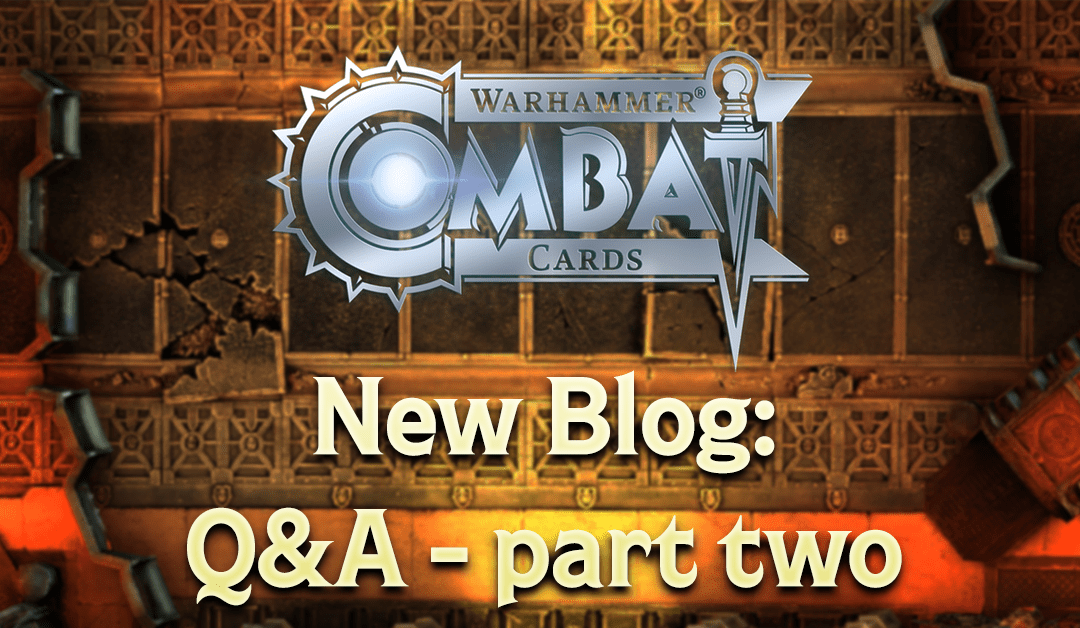 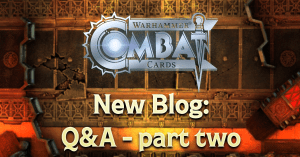 Welcome to part two of this Combat Cards Q&A session. You can find part one here, where we covered photo’s, filters and factions. Let’s jump into the second half, starting with some TV:

Daniel asks if we’re planning to include any elements from Games Workshop’s newly announced Eisenhorn TV series. We already have Inquisitor Eisenhorn as our first limited edition card, so it’s possible we’ll make him a general release when we introduce a new limited card, but other than that it’s difficult to say. Don’t forget that the heart of each Combat Card is the Warhammer 40,000 miniature on it, so if GW release mini’s of the Eisenhorn TV show’s characters then we’ll definitely include them, otherwise it may be tricky. Either way, we’re all looking forward to see how everyone’s favourite Hero of the Imperium / Dangerous Traitor is represented on TV.

Carrying on the theme, Orkman55 asks about unlocking Eisenhorn in the game. This is a common question, so to make sure everyone is up to date let’s run through it.

Currently there are two ways to unlock the exclusive Inquisitor Eisenhorn card – by having one of the physical cards we give away at real world events, or by asking a question for these regular Q&A posts.

The Eisenhorn giveaway cards have a code to unlock the card, but unfortunately implementing that system in the game has proven tricky due to the platform holders. I won’t go into it here, but politicspoliticspolitics. Anyway, if you have a physical Eisenhorn card contact our Customer Services team through the game’s options menu, or by using this link: https://support.flaregames.com/hc/requests/new and they’ll unlock it in game for you.

On the other hand, if you ask a question for one of these Q&A posts you should have received an email telling you how to get your Eisenhorn card.

Feanoro asks if we plan to add realtime PvP matches to the game.

So we’re all starting from the same point, every match in Combat Cards is against an AI, but the decks it uses are usually made by another player (meaning your deck is fighting while you’re offline). The only time the AI uses a preset or randomised deck is in the game’s tutorial or in the weekly Campaigns. We have plans to upgrade the AI to make it smarter and to stop it ‘stalling’ when it can’t see a good attack to make (see this blog post for more details).

As for realtime player-versus-player matches, those aren’t on our immediate task list because it will require a large amount of server, UI and matchmaking work, plus changes to deployment, special rules, etc. and we have higher priorities right now. However, I do think we’ll introduce PvP at some point, (perhaps as part of clan versus clan battles?) I just don’t have a timeframe for it.

Continuing the Campaign questions, Matt asks if we plan to include the bodyguard kills you make in Campaigns towards opening the skull pack and for Warlord kills to give you victory packs (like the ‘normal’ battles do). The short answer is no, we don’t plan to do this, and the reason is that we want to keep a very clear distinction between what the normal and Campaign battles are for.

Murzik Zero would like some hints on the next Warlords that we’re planning to add to the game. That’s tricky because A, I don’t want to ruin the surprise, and B, our plans often change for various reasons. For example, he mentions the Aeldari Phoenix Lords, but the next Aeldari Warlord is currently planned to be the unfailingly creepy Urien Rakarth.

By the way, we had planned to have the next set of Warlords in the game already, but there were some behind the scenes fixes and upgrades which needed to take place on the battle system first (you might have noticed, for example, that some of the Warlord special rules don’t trigger 100% correctly – this is caused by the bugs in the battle systems that I’m talking about). So, no ETA on the next set of Warlords, but hopefully not too long.

POWER THIRST asks if we’re planning on adding new mechanics to the game’s combat. Funny you should ask that, because the next two week’s of this blog talk about exactly why Combat Cards is designed like it is. But in the meantime, we have no plans to add new mechanics just yet, and instead will ‘deepen’ the game with new traits, new Warlord special rules, and changes to Campaigns and Missions.

It’s entirely possible that we will add new elements to the combat in the future (we’re currently discussing how to include Lords of War in the clan-versus-clan battles, for example), but those changes are further out.

Сергей Звездин asks if we can show the next Warlord you’ll face in Campaign battles, to help with planning your deck. It’s a good idea, and we would like to make improvements like that to the Campaigns to help players use clever tactics to beat the AI decks. For example, we’ve discussed having the AI use the same deck a second time if it beats you with it (as opposed to now, where it creates a new deck every time). This would allow players to customise their deck to beat that opponent, because they know what it’s going to throw at them.

Apologies for saying this a lot, but I don’t have a timeline for when those changes will happen. We want to get to them soon, but they have to be balanced against other improvements that players have been asking for.

Michael Marshall had a couple of questions about Campaign rewards, including whether they’d give prizes to % brackets, rather than fixed numbers (i.e. 1st to 10th), which is a change we’ve already made. Now all Campaigns are dynamic, and scale their prizes by the number of players who enter them, so a particularly busy or quiet Campaign still offers the same chances of earning prizes.

He also wanted to know if we’ll offer better prizes to players who come in lower on the Campaign leaderboards, which is something we’re using Missions for. As these only care about your own performance they offer every player the same chance to unlock cards, while also making every Campaign battle useful (as even if you lose a battle it still contributes to the Mission).

Finally, Todd Kay asks for more detail on how the attack buffs and debuffs (from cards Readying and from the end of turn bonuses) work.

Each time an attack type is buffed it increases the damage your next attack will do, but the bonus you get to that attack gets smaller with each subsequent buff, until you use that attack and start again. I.e. the first buffs to an attack are worth more than ones added on top, meaning you get diminishing returns. This does mean that you can still be earning buffs to an attack after its green ‘buff bar’ is full up, but you’re only earning small increases at that point.

Debuffs work the same way, so continually debuffing an attack has less and less effect on it (until they use the attack and everything resets).

Note that the red ‘this attack is debuffed’ visual you see on the attack’s bar does not reflect how much it has been debuffed – the red effect is either on or off. We did this because we found players simply did not see an attack’s green bar going down when it gets debuffed, so we made the decision to put a big, in your face, warning on the attack. The downside to this is it makes it look like the attack is completely useless, when it might still be worth using, despite the debuff.

Thanks to everyone who submitted a question, and hopefully some things are a little clearer now. I’ll run another round of Q&A in about six months, so if you want an Eisenhorn card keep an eye out for that.