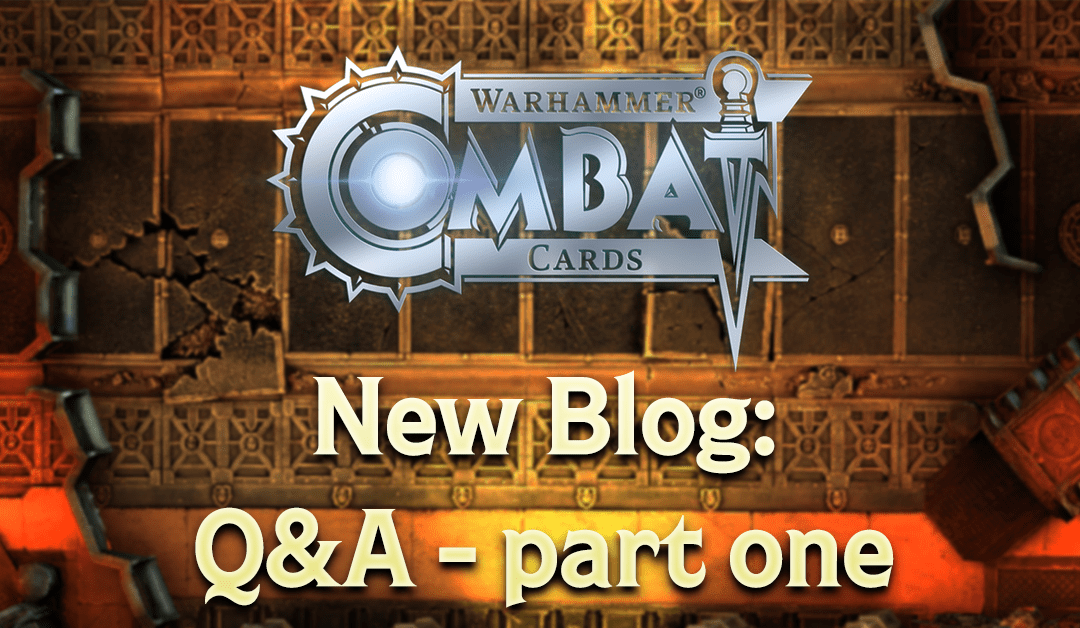 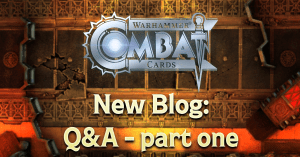 A few weeks ago I asked people to send in any Combat Cards related questions, offering a copy of the limited edition Eisenhorn card for each one. Proving that A) people want to know stuff and B) people love free stuff, I got enough questions for two posts. So let’s get to it:

Xaverius the Purger (that’s Mr Purger to you) asks about how we’re planning to balance clans against each other in the Apocalypse clan battles we have planned. This is a tricky question to answer, because while we’re working on ‘base’ clans, the clan battles are still at the idea stage, and haven’t progressed from that to a full design. This is because there’s no point in us writing a detailed design for clan battles yet, as we want to see how players engage with the normal clans first, and then adapt our plans from there. So, short answer; yes, we’ll balance clans against each other, but we haven’t designed how yet.

Влад Кулагин asks if we think some factions are weaker than others, for example the Orks versus T’au. It’s an interesting question and the answer is probably yes, some are better than others. However, this isn’t a deliberate choice to favour some factions, and is instead part of the metagame which all card games develop. Players work out the best combinations of cards and we use that data to boost underused cards and tone down ones which are too effective. Players then work out the new best cards and this repeats.

In the short-term we are looking to adjust the costs of cards which are clearly over or under-powered, and are also going to boost the effectiveness of some Warlord special rules. These changes will roll out soon, so keep an eye on our community channels for more news.

Stephen asked about Combat Cards tournaments, where groups of players get together and battle each other. This is something we’ve discussed and is on our task list, but it’s not at the top of the list yet.

The difficulty is that all Combat Cards battles are managed by a central server, preventing cheating by acting as the arbiter of all things. Therefore it’s tricky to let players set up ‘sub-servers’ which only a few people are allowed into. It’s this technical work that will need doing before we can run tournaments, and because the number of players who’ll use this feature may be limited we’re concentrating on game wide work first.

Juan asks about cross-play with PC or a Steam release. Both are possible in the future but aren’t currently a priority. However, we’re always keeping an eye on what our players want, so if there’s a clear demand for a PC version then that would make it a higher priority.

Justin and Logan asked about leaderboards and rankings, both for individual players and clans. Individual rankings / leaderboards are being worked on now, with the aim to get them out soon. I don’t want to go into too much detail here because it’s a topic for its own blog post, and also because the details may shift as the feature is developed.

Clan versus clan leaderboards will come after the initial clan release, when we add the apocalypse style clan battles. More details on those will follow, but not for a while.

алексей 228 asks about sub-factions being added to the game so people can play as their favourite Hive Fleet or Chapter. We’re not planning on breaking up our factions as some of them would be too small to make varied decks, but we have added keywords to our cards, including their ‘sub-faction’.

You’ll have seen this with the new Mission, where you’re rewarded for including Ultramarine cards in your deck, and this is something we plan to do more of. While this isn’t exactly what you’re looking for it will at least hopefully lead to more themed decks appearing.

Christopher wants to know about better filtering of cards and more details of their stats. We’re hard at work on an improved deck editing flow, which will make it easier to compare cards as you build your deck, plus make it easier to run multiple decks. So, while we don’t have any plans to let you list all your cards purely by their stats, the new filters should make it easier to see which cards are good at which attack.

He also asked if we’re going to include more Harlequin cards, to which all I can say is that I hear Death Jesters are popular right now.

Максим Виткалов and Feanoro39 asked if we plan to add Primarchs to the game, to which the answer is yes, plus all the other really ‘big stuff’ Warhammer 40,000 groups under Lords of War. Rather than trying to squeeze a Titan onto a card (would we shrink it or just show its foot?) we’re planning to use Lords of War in our clan versus clan battles.

I can’t give more details than that (because they haven’t been worked out yet), but look for more on this in the future, after we release the initial clan functionality.

Alex asked whether we plan to add heroes from 30K to the game in the future, to which the answer is no. Our license covers Warhammer 40,000 but not the Horus Heresy, so we won’t be adding anything from that era to the game. Check out games like Horus Heresy: Legions for your 30K fix.

Brendan asked why we’re using photo’s of the miniatures instead of artwork, which has come up a few times. We’re doing it for two reasons:

He also asked about being awarded prizes for battles once your various chests are all full / exhausted. This isn’t something we’re planning right now – check out this blog post for why.

I’ll be back with the second batch of questions next Friday, but in the meantime do let me know if any of the answers were unclear. You can get in touch by leaving a comment below, through our Facebook page or by mailing [email protected].