Design Blog 73: The Past, Present and Future of Combat Cards

A few weeks ago I was asked to give a quick talk on Combat Cards at Games Workshop’s largest UK convention, Warhammer Fest. The talk was to let attendees know about the game (as we’re not out in the UK, most people at WHF wouldn’t have seen or played the game yet). But rather than deliver a 10 minute advert I wanted to show something that people may not already know, so I gave a talk on how the original, paper, Combat Cards from the ’80’s eventually lead to our videogame.

For those of you who weren’t at Warhammer Fest, here are the slides from my presentation, along with some notes on what I talked about. Enjoy! 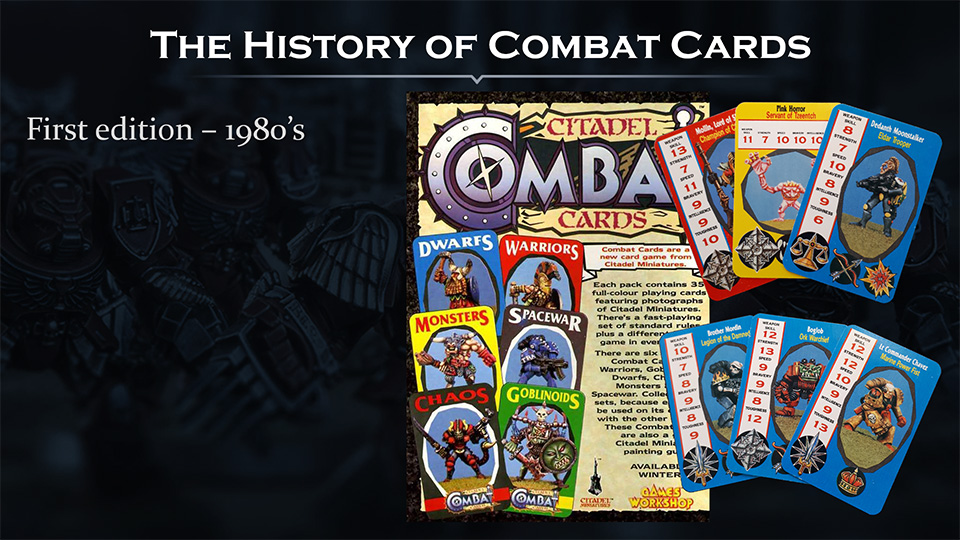 We started with a look at the original Combat Cards, which came in a variety of themed packs (some of which were hugely powerful, causing many arguments over who got the ‘Monsters’ pack). Each card included an ‘Eavy Metal painted miniature, along with stats that tried to boil how that character fought on the tabletop down into a simple ‘Top Trumps’ style game. Note the icons across the bottom of each card, which didn’t actually do anything in the base game. 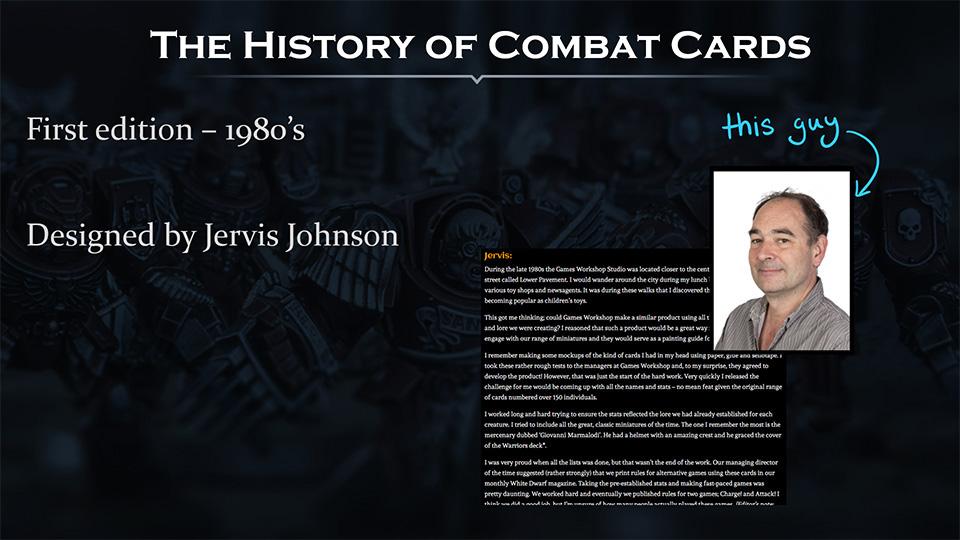 The original Combat Cards were designed by Jervis Johnson, and if you’re reading this then you probably know who that is. If you’d like more detail, we have an interview with Jervis on this very site… 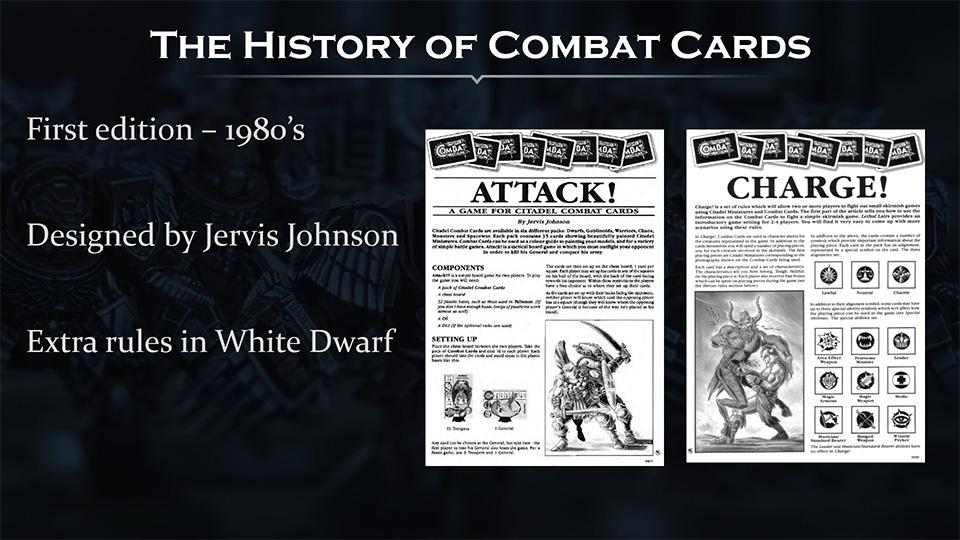 Rules for new ways to play with your Combat Cards appeared in White Dwarf magazine. Attack! was an odd Chess-type game, where you stood your cards upright so you could see them, but your opponent only saw their backs. It mixed tactics and memory as you tried to make sure each battle favoured you. Charge! can be seen as the precursor to games like Heroquest and Warhammer Quest, with cards acting as heroes and monster in a dungeon. Both games made use of the icons across each card and really expanded on the simplicity of the base game.

A second wave of Combat Cards were released in the ’90’s, using – as was the painting style at the time – every single colour that humans can perceive. 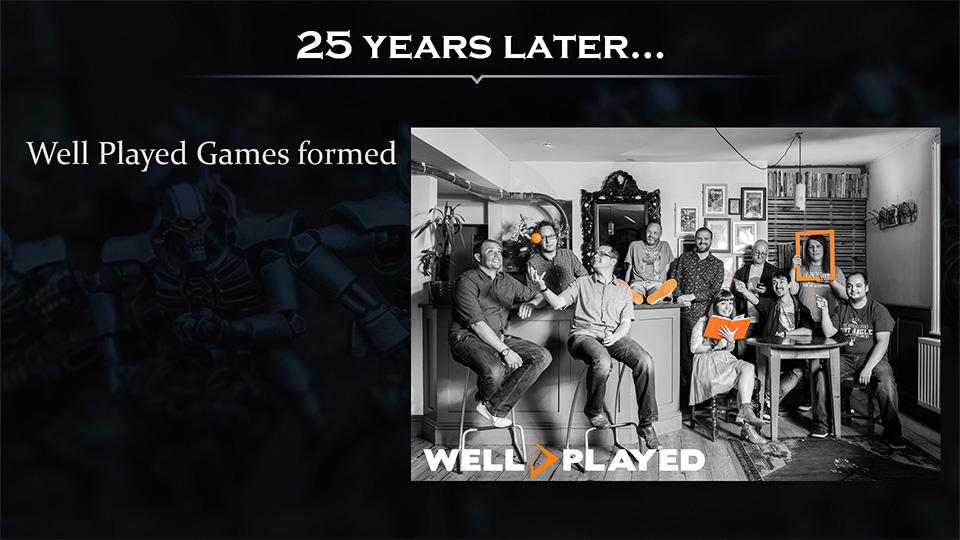 After that, the Combat Cards brand was dormant for a long time. Meanwhile, in videogames land, a group of friends was being made redundant and so decided to set up a small studio together (by the way, this photo is a couple of years old now – we’re about double this many people now). They wanted to make a card game and they wanted it to be part of a world-famous brand… 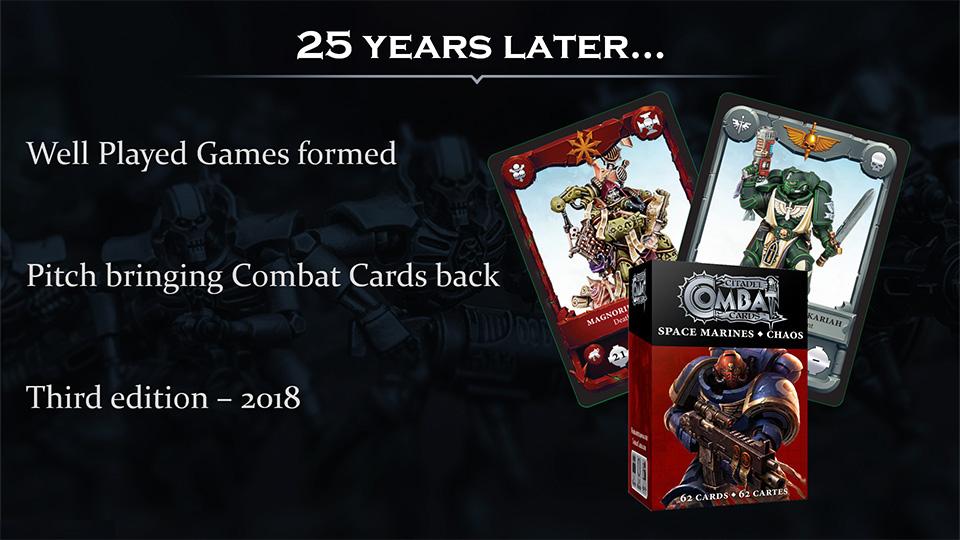 We approached Games Workshop with the idea of bringing the Combat Cards brand back, an idea GW liked so much they decided to release a new pack of cards. This one featured more advanced rules than the originals, and pitted Space Marines against Chaos. Meanwhile, Well Played Games was busily working on the mobile game. 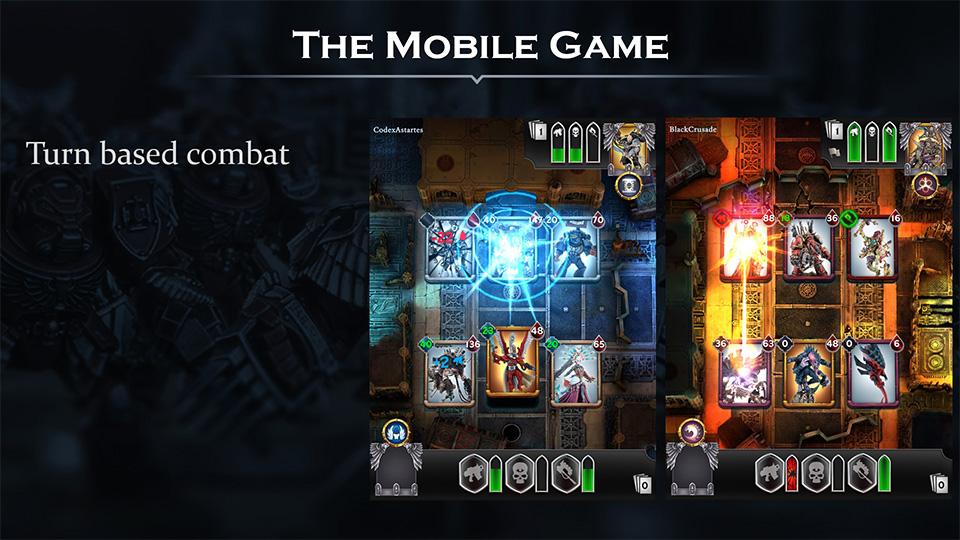 If you’re reading this then hopefully you’ve seen / read about / played our game, but in case you haven’t, it’s a turn based card game, where you pit your deck against opponents. 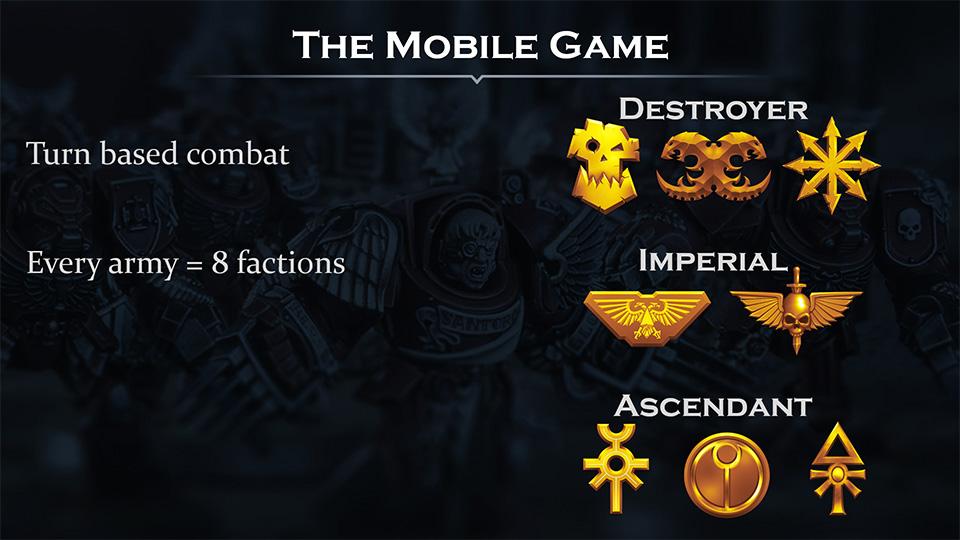 We include every Warhammer 40,000 army in our game, but – as some armies are a lot smaller than others – we group them into eight ‘factions’. For example, our Servants of the Emperor faction includes Imperial Assassins, Sisters of Battle, Astra Militarum, Inquisitors, Rogue Traders, Adeptus Mechanicus, Adeptus Custodes and so on. Those factions are then grouped into allegiances, letting you build decks across several (but not all) armies. 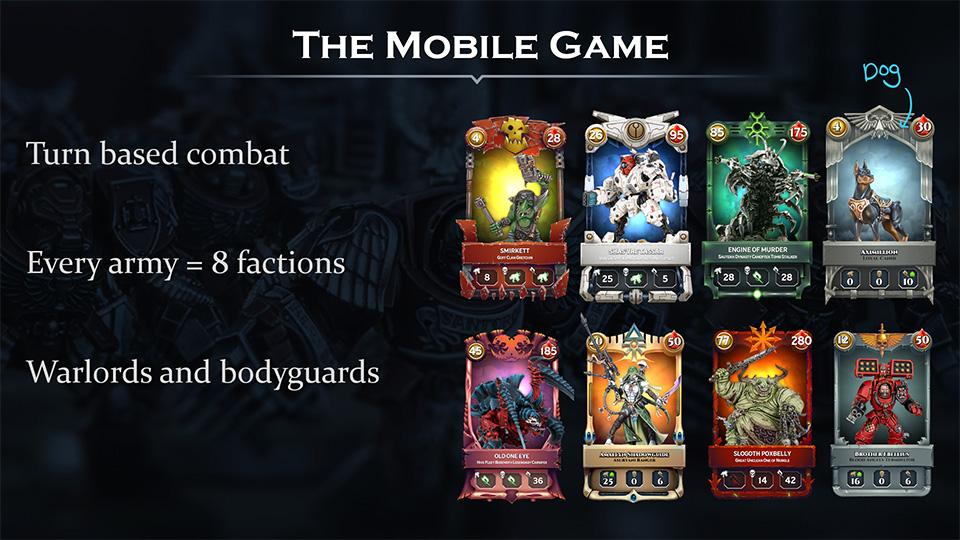 Here you can see that each faction has its own card border, and the various stats which define a card. Some of our cards are Warlords, and each deck must include one of those. As you’d expect, your goal is to reduce your opponent’s Warlord to zero Wounds before they do that to yours. 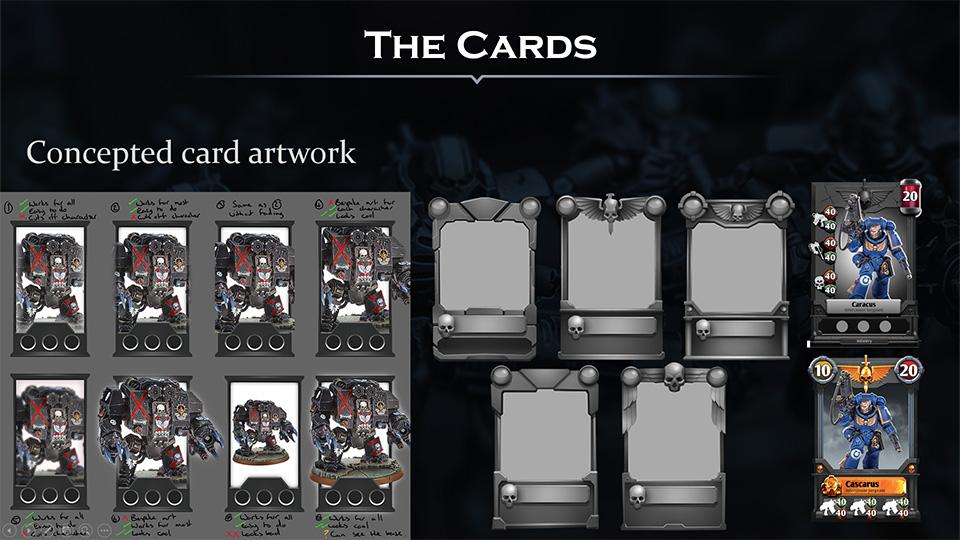 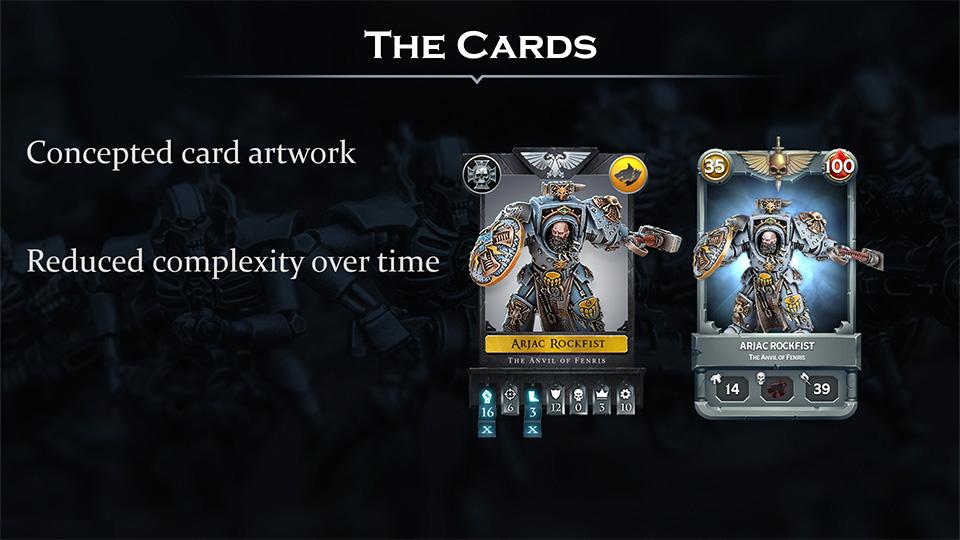 We’ve posted about the concept process our cards went through before, so check that out if you want to see the decisions we had to make. The biggest thing we learned was to simplify and reduce the number of stats each card had. As a result we try to capture how each character fights on the tabletop and replicate that in Combat Cards. For example, our Wounds value reflects that character’s Toughness, Wounds, saves and special rules. 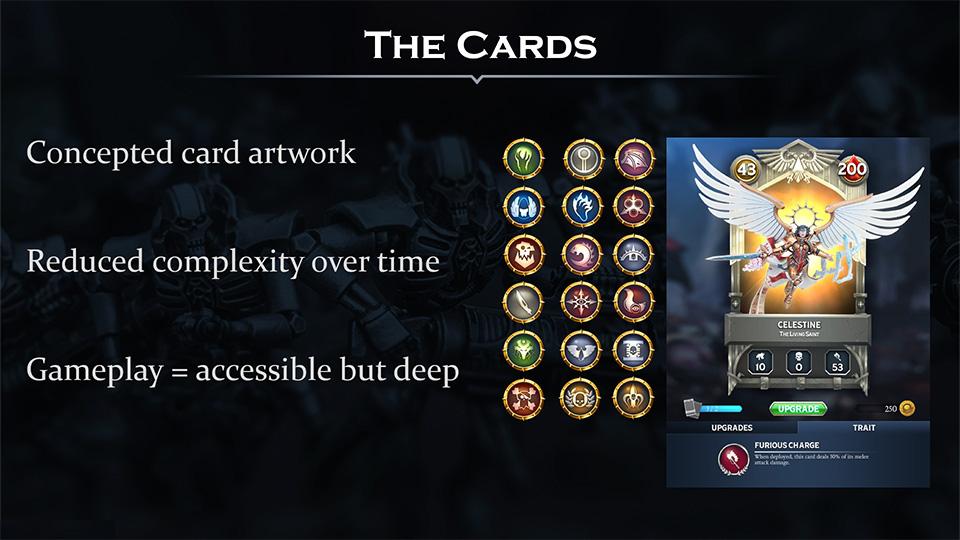 Although our game is very simple to play, we have a lot of depth with traits (one-off abilities that cards used when they’re deployed) and special rules (passive boosts that each Warlord has, which help you build and theme decks). Also, I just wanted an excuse to include our Saint Celestine card, because it’s ace. 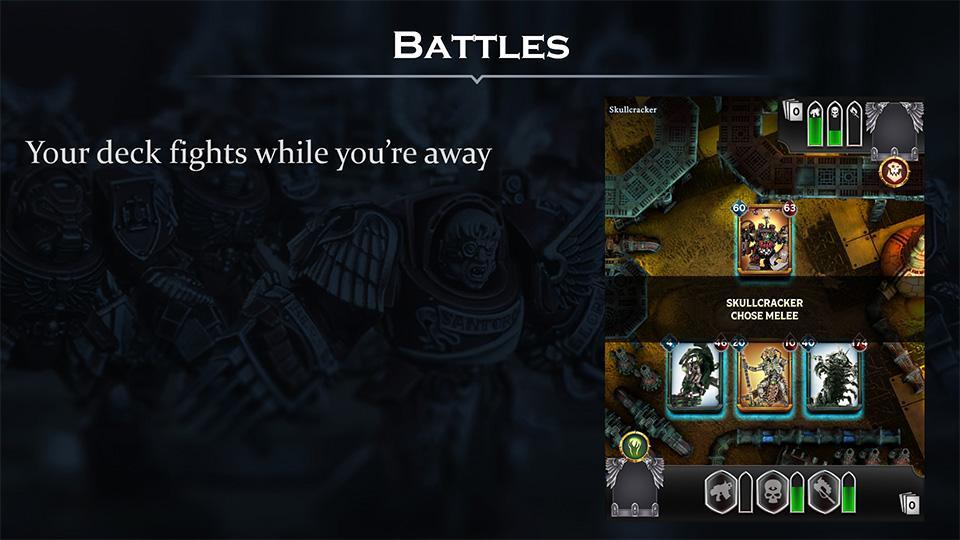 One area I wanted to cover was that battles are against the AI, but that AI is controlling decks created by other players (and therefore, when you’re offline your deck is battling against other players). 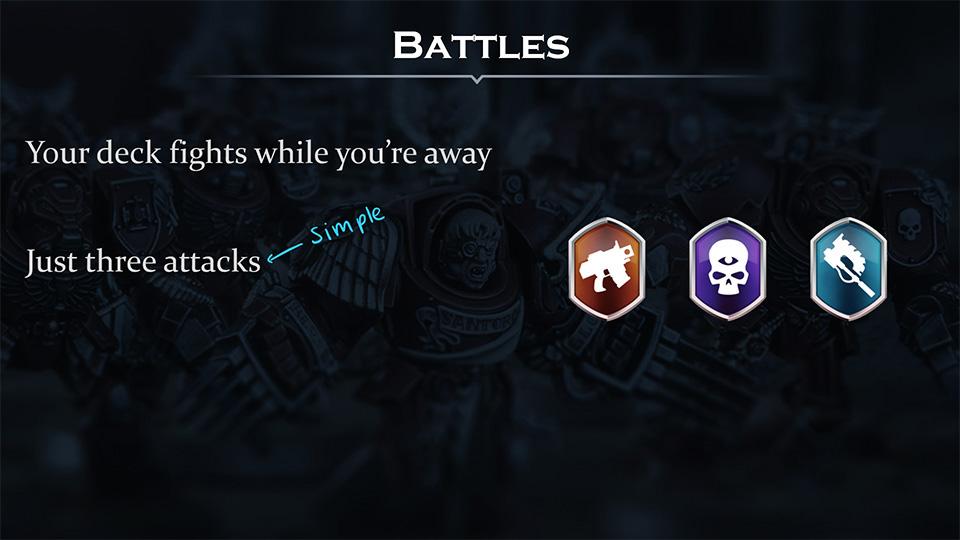 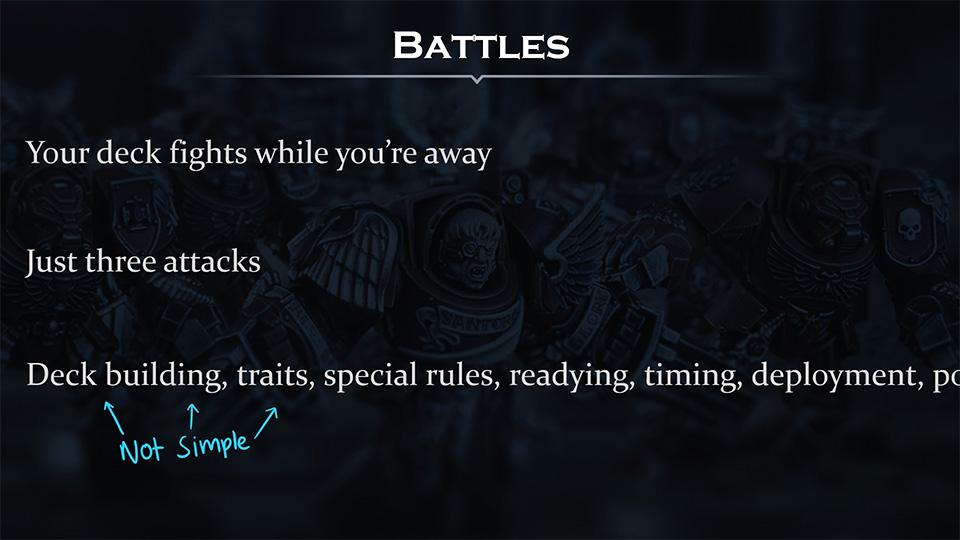 These slides covered the fact that while our game is really easy to play (just three attacks to choose from), it has a lot of depth. There are many factors to consider when building a deck and you often find yourself making ‘sub-optimal’ choices during battles, as they can provide better outcomes than the obvious choice. Also, for anyone who was at WHF yes, that line of text is meant to go off the screen, and no, that joke didn’t really work and won’t be repeated. Carry on. 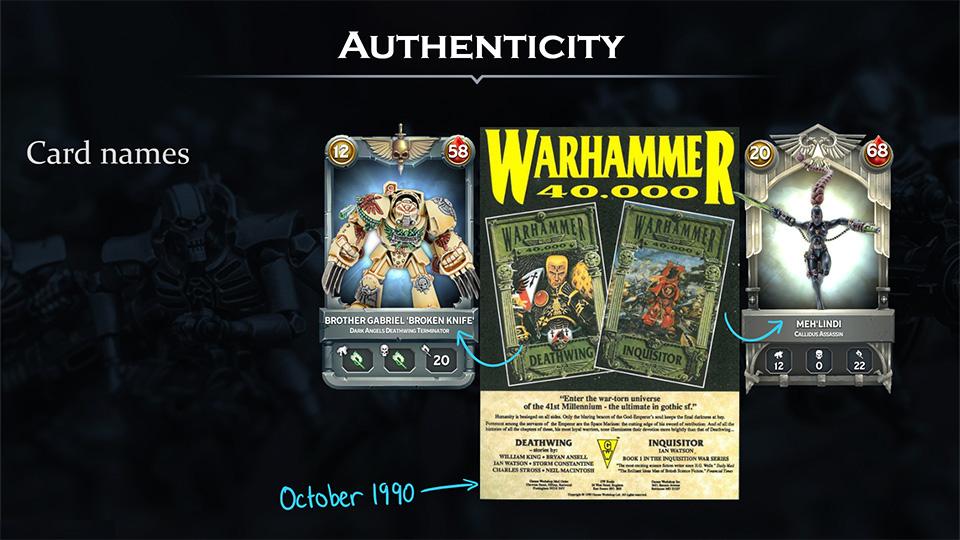 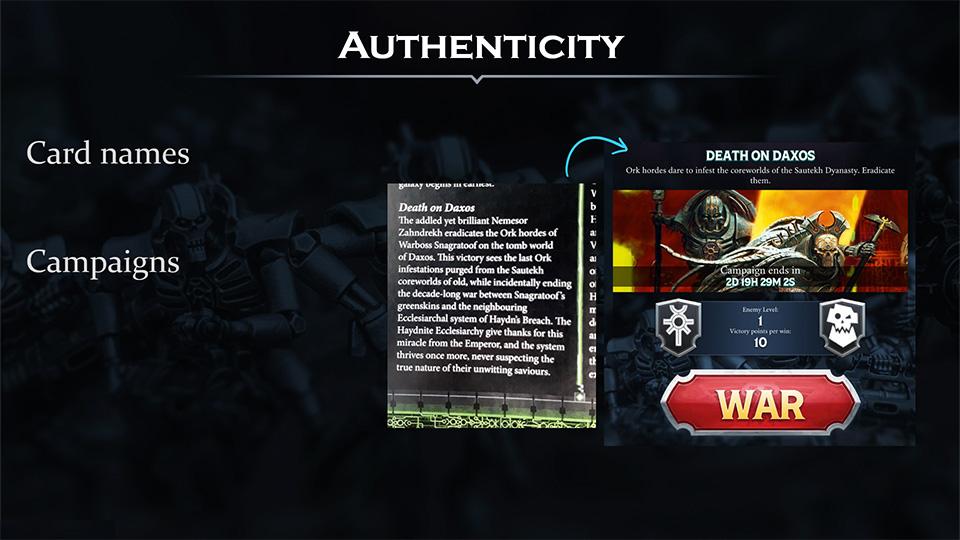 It’s important to us that Combat Cards is a ‘proper’ 40K game, not a generic card game with a license stuck on top. There are several ways we ensure this, including naming as many of our characters as possible from White Dwarfs, Codices and sourcebooks dating back to Rogue Trader. We do the same thing with our week long Campaigns, each of which is based on 40K lore. 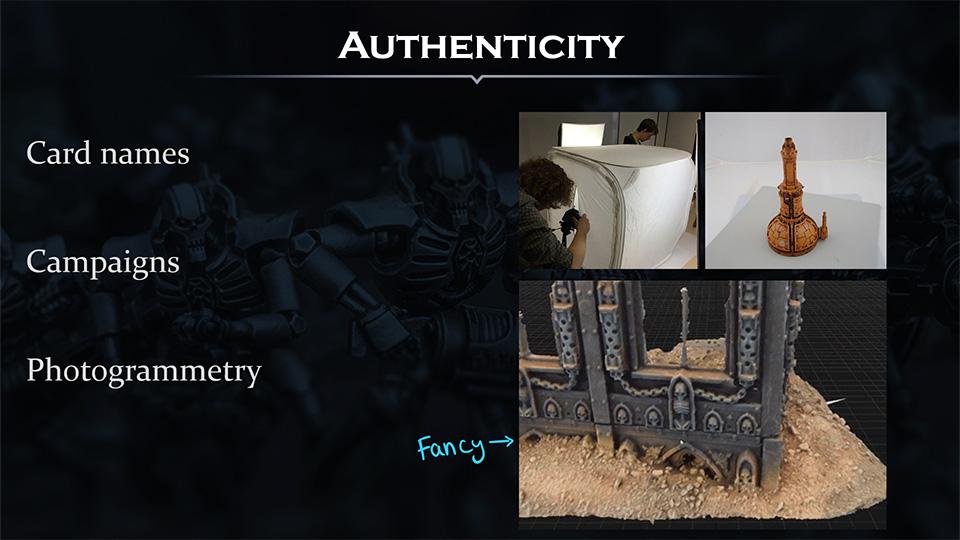 Our quest for authenticity also includes us scanning in scenery painted by Games Workshop to appear on our battlefields using a process called photogrammetry. Check out the link to see that scanned in scenery whizzing about, demonstrating how a sequence of photos can make a 3D asset in game. 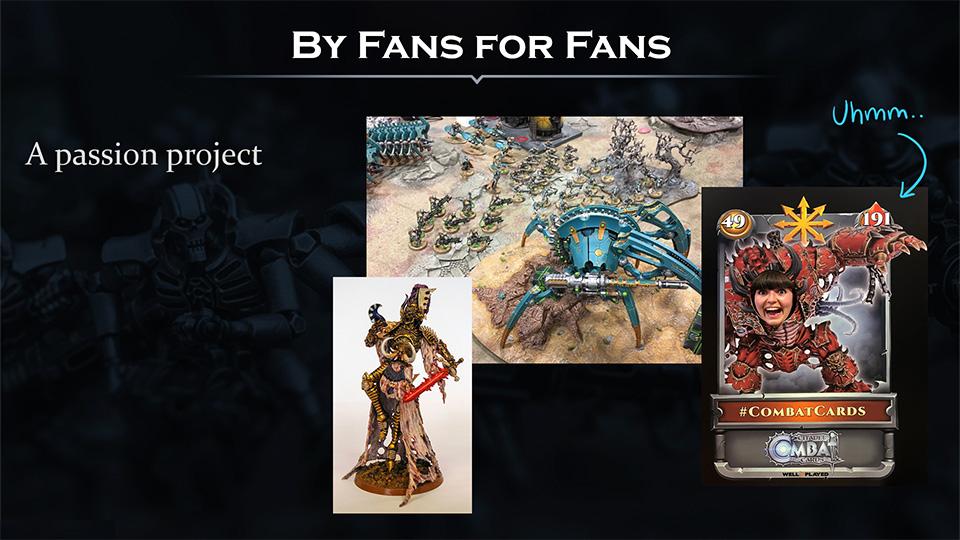 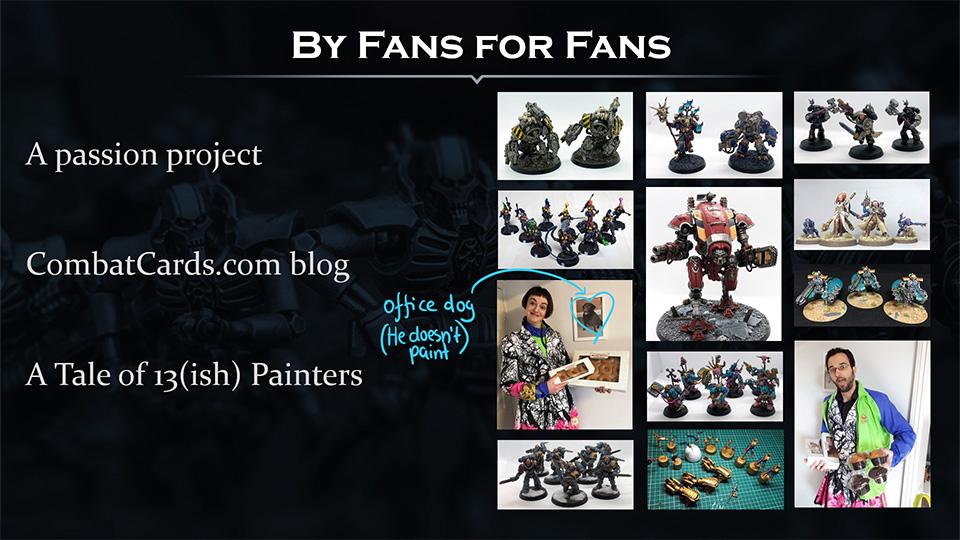 We’re on the home strait now! I showed off some of the 40K activities our team gets up to, including posting this blog and our Tale of 13(ish) Painters series. I would like it on record that I’m still proud of the joke that, as part of the second slide, I explained why people who fail a month’s painting have to buy the team cakes while wearing both hideous jackets… Two thin coats! I assume you’re now laughing just as hard as the audience at Warhammer Fest (i.e. not very much at all). 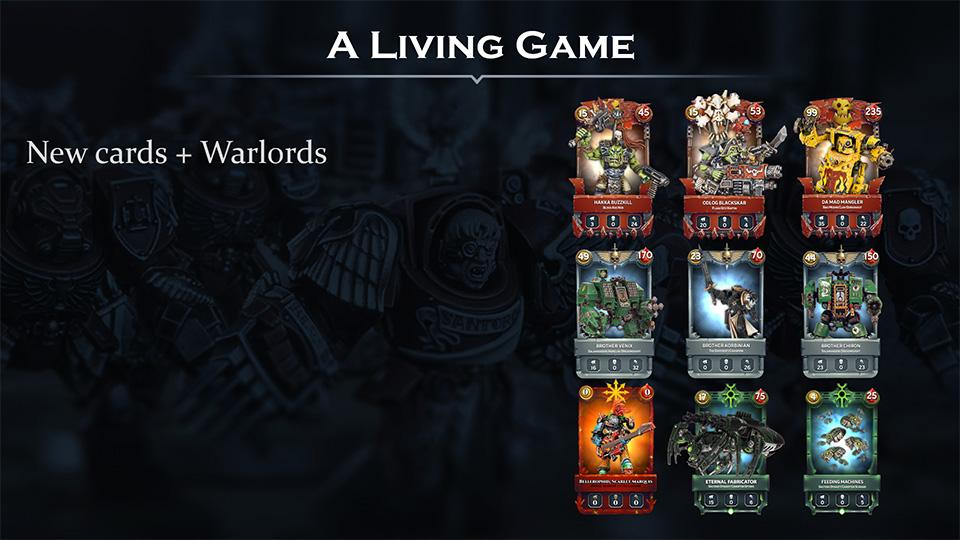 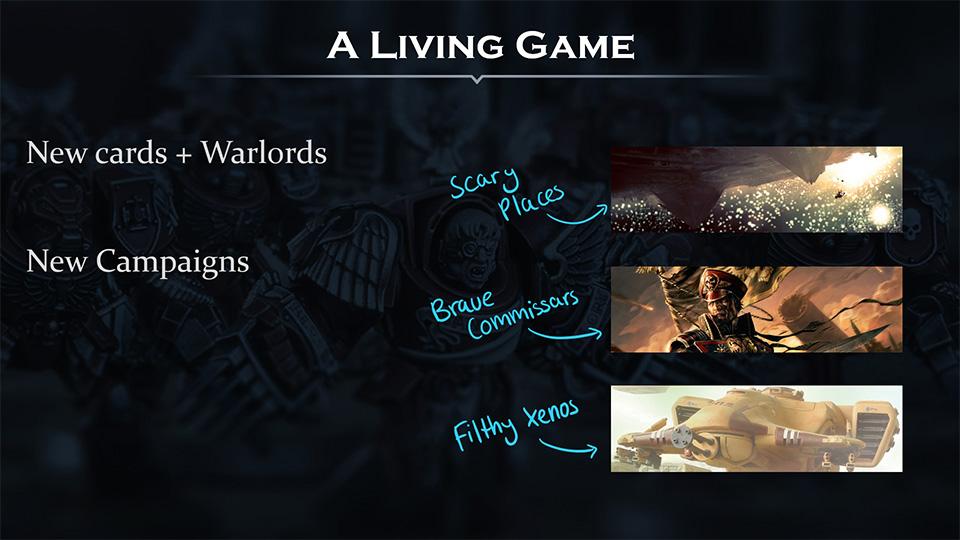 For the final section I showed some of our upcoming content, including miniatures and new Campaigns to be released in the next couple of months. 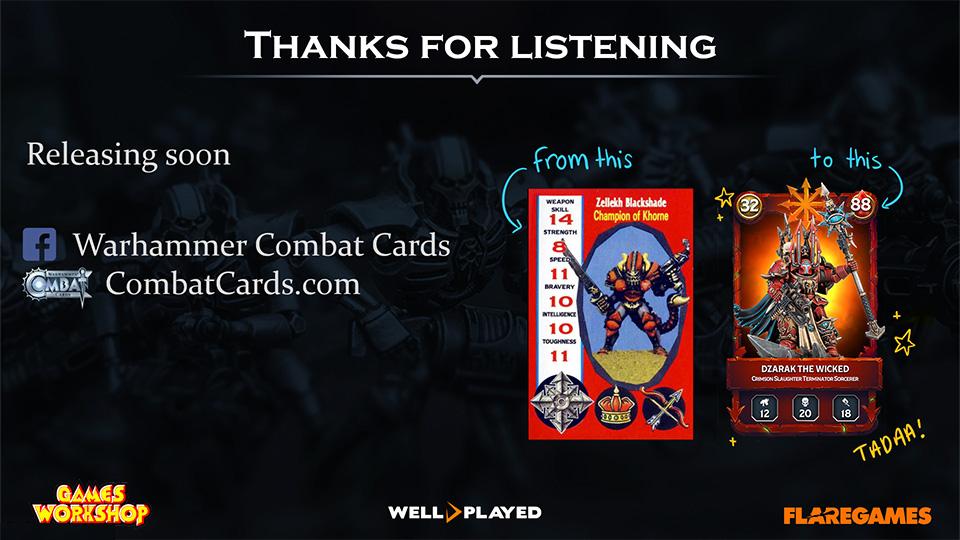 And there you have it (and congratulations if you made it this far through the wall of images). If you’re new to our game then hopefully you now have an idea of how we got here, but even if you’re a Combat Cards veteran I hope you found something new and / or interesting.

Hopefully I’ll be doing more of these sort of presentations in the future, so if you have any comments please pass them on below, through our Facebook page, or by mailing [email protected].