Before getting into this week’s blog, I just wanted to say thanks to everyone who checked out the game at Warhammer Fest last weekend. We had a great time, demoing the latest build, answering questions, giving away the exclusive Inquisitor Eisenhorn cards and reminiscing about the ‘80’s Combat Cards with, err, ‘veteran’ gamers. Having your photo taken as a Helbrute was also a big hit, with some truly terrifying examples being produced.

I think most war gamers will agree that one of the great pleasures of our hobby is seeing two armies of painted miniatures battling across great terrain.

Technically Warhammer 40,000 plays in exactly the same way if you fight over cardboard boxes and ‘book pile’ hills (and let’s face it, we’ve all had that battle at one point). But nicely painted scenery adds to the spectacle of the battle, and helps with ‘suspension of disbelief’ – that these really are warriors from the far future battling over the fate of a planet.

This is just as true for Combat Cards – our battles could take place over an abstract grid, or dark void, but that would be to miss out on a big part of the 40K hobby’s appeal. After all, we’ve got the best painted miniatures in the world in our game, so we need equally great scenery for them.

Because we don’t make a big deal of it yet it’s unlikely you’ll have spotted this, but the scenery on our battlefield isn’t an asset we’ve made up – they’re actual Games Workshop terrain pieces from their studio in Nottingham. Games Workshop very kindly let us use a process called ‘photogrammetry’ to get digital versions of their terrain and gaming boards into Combat Cards.

You see that Promethium Refinery at the top of our battlefield? That’s the actual piece of terrain used on the box and rulebook of Shadow War: Armageddon. Every piece of terrain we include has featured in Games Workshop products, or battle reports, in White Dwarf, and so on. We think that’s pretty cool, but what is photogrammetry and how does it work?

Each piece of scenery was placed on a turntable in a light box and photographed from multiple angles, with the camera staying still and the scenery being rotated a few degrees each time.

Here’s Adam taking a shot of a piece of scenery while Jordan studies his latest Forge World purchase. And inside the light box, the scenery can be rotated on the turntable.

Now we have the scenery as digital images, we run them through software which stitches those images together. It automatically works out what’s the same point on the scenery but rotated by a few degrees, and what’s background emptiness.

The software produces a 3D model of the scenery, which – after a bit of manual cleaning up – you can spin around and view from any direction. Then there’s stuff about textures and shaders and things that only artists understand, but to be honest I’m pretty sure all that stuff is powered by magic anyway.

Apologies for the large image, but this shows a piece of physical 40K scenery that’s been ‘digitised’ by photogrammetry. The white bits show what the results look like before they’ve been cleaned up.

Finally, each piece of digital scenery is placed on our digital battlefield. We’re still learning the most effective way to use our new scenery – working out how much to include, where to place it, etc.

For example, at the moment the battlefield camera is very static, but over time we’ll experiment with moving it during combat. Maybe each faction will have their own scenery, or perhaps each Campaign will. 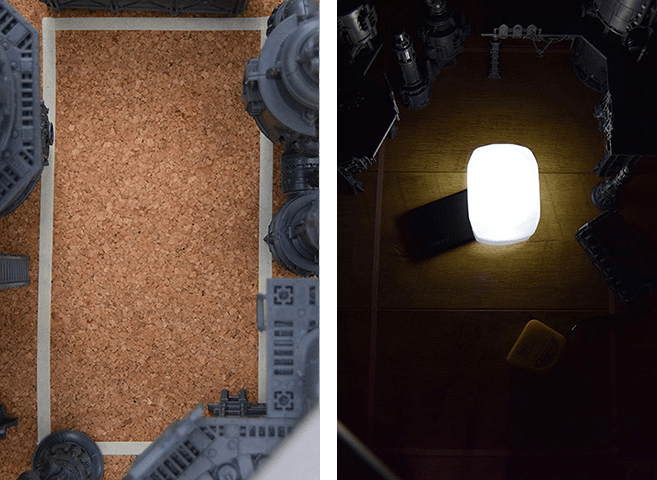 On the left is our first experiment with physical 40K scenery placed around the ‘battlefield’. By placing a bright light in the centre we can see the kind of dramatic lighting effects we’ll be able to achieve.

The initial launch of Combat Card only features a single battlefield, but we’ll be adding more over time. Now, when you see a new scenery piece in the game and think ‘haven’t I seen that before?’ you’ll know the answer is yes!

Thanks for reading, and I hope you enjoyed this insight into how the game’s put together and the lengths our artists will go to for authenticity. Implementing all the scenery like this is a lot of work, but we think it’s worth it to achieve our goal of ensuring this is a true Warhammer 40,000 game – not a card game with a layer of 40K sprinkled on top.

I’ve mentioned authenticity before, way back in blog 9, so check that out to see why this whole area is so important to us.

I hope you found this interesting – if you have any questions or feedback please mail [email protected] or visit the Combat Cards Facebook page.