Hi, and welcome to the third milestone for the 13(ish) painters taking part in our six month long painting challenge. Each month we have to paint 10 Power / 100 points of Warhammer 40,000 miniatures or suffer a cake / humiliation based penalty (with one month off by using our ‘mulligan’).

After last month’s parade of failures and mulligans, I am proud to report that this time almost everyone has delivered the goods. Feast your eyes on these: 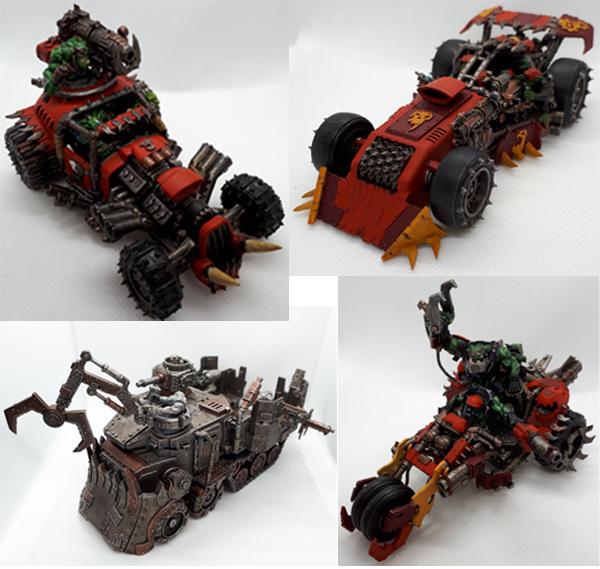 This month I was forced to abandon earlier plans. Firstly, I stopped worrying about being too competitive with the army I put out and started painting fewer colours to pass this challenge. My submission this month meant bringing all 26 power level worth of Ork vehicles I’ve painted so far to demonstrate progress. The Battlewagon has none of the Evil Sunz colours and also features headless, silver Orks. I’ll keep going with this in the coming few weeks, along with painting my Warbikes! 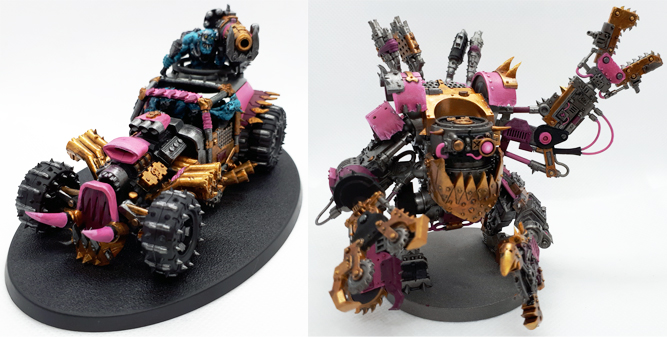 Ed’s note – Leanne delivered her Super Pink Orks and was then immediately struck down by Nurgle’s Rot. In lieu of Leanne telling you about her painting experience, I can only report that she did not enjoy being stabbed in the fingers by the extremely spiky Deff Dread. 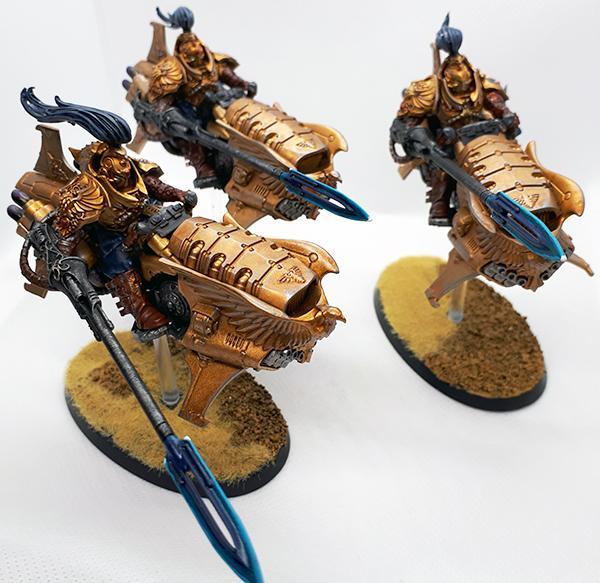 This month I got to finish off the 3 Vertus Praetors. These guys feel like what a Custodes army is all about, totally over the top in every way. Really enjoyed the painting this time. I got to play with trying metal tempering on the pipes, and failed totally. Next month we bring out the big guns with a dreadnought. 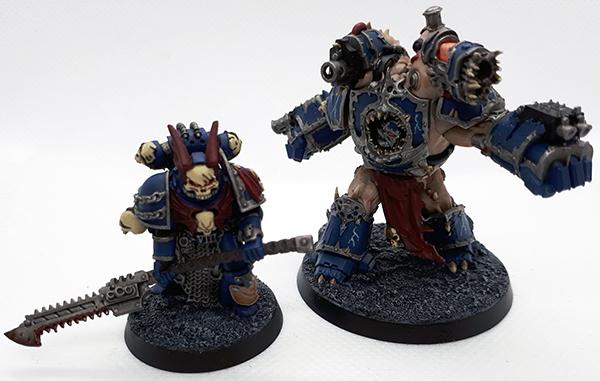 This month I was catching up after my mulligan, with my 10PL coming from my other Obliterator and a Master of Executions. The master is made out of the brilliant Night Lords praetor from Forgeworld, I knew I had to fit that model in somewhere as soon as I saw it. I’ve kept his jump pack for later use on a Chaos Lord and switched it with the backpack from the equally excellent Sevatar kit. Overall I’m pretty happy with him, he’s got an excellent skulls to surface area ratio going on.

I’m starting to find my stride with painting to a deadline, usually I’m a massive perfectionist, but I’m learning that’s not really the way to be for this sort of challenge. So I’ve found my best bang for buck scheme, which is getting some nice thin basecoats down, a recess wash, and then select highlights/fancy bits, but no going overboard. I can always come back and finish things later, when the threat of having to wear horrifying coats as a forfeit isn’t looming so large. 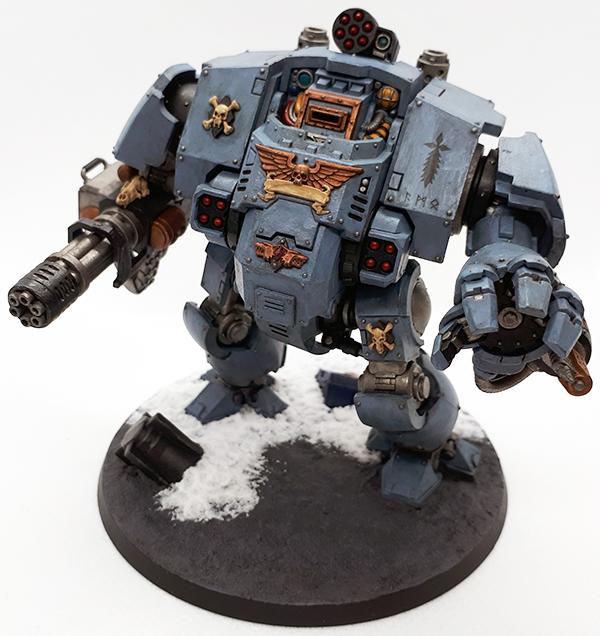 This month I painted my Redemptor Dreadnought. I’m glad I built this one in sub-assemblies. There’s no way I would’ve got the wires done without it. Plus it’s cool to see it come together at the end. Next month is back to the Intercessors and a few Aggressors. It’s going to be a tough task to get them done in time. 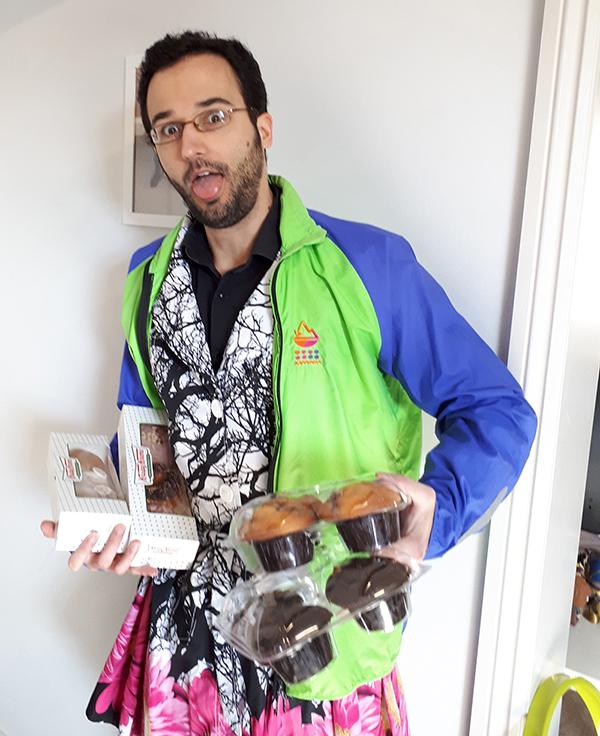 Ed’s note – In a quite extreme method of extracting himself from the painting challenge, Paul has left Well Played Games to return to sunny France. As he also failed last month’s challenge, here he is wearing the Two Thin Coats of Shame and carrying his cakey offering of penance. Arrivederci, Paul. Arrivederci. 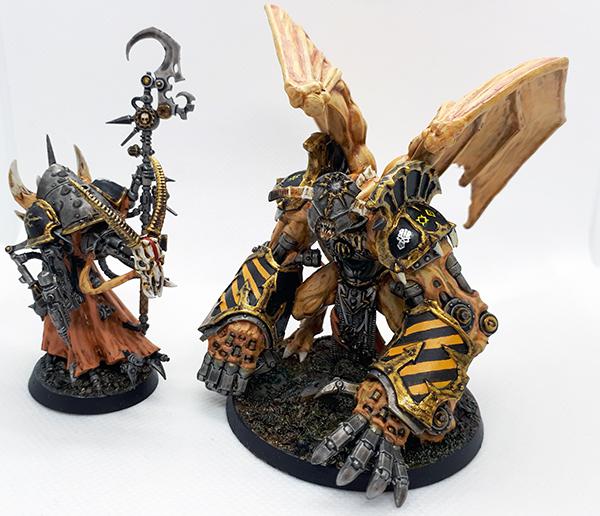 More of my crazy conversions this month, giving me a Dark Mechanicum / Iron Warriors Chaos Lord, and a Daemon Prince. The Prince was actually converted a long time ago, when I butchered a perfectly innocent Maulerfiend for conversion parts, and has been lurking in my box of shame, waiting for a reason to be painted.

Next month I’ll submit some Chaos Bikers (who are probably my most ridiculous conversions yet) plus some more Cultists. My local wargames club is about to start running their yearly Warhammer 40,000 campaign, which is giving me a double reason to paint more Iron Warriors (army painting tip #1 – give yourself a deadline).

FAILED – Ed’s note – I’ll let Keith tell the tragic tale of his month of failed painting next time. However, a word of warning – it involves fully painted models, a child and a heavy box. Prepare yourself for horror! 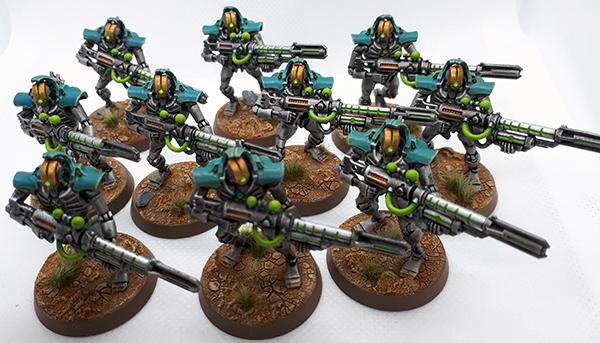 This month I decided to paint some Deathmarks. The idea of a robot assassin hit squad armed with disintegration rifles phasing in from hyperspace to take out a key target is extremely cool, and I hope they’re up to the task! It’s been fun to get some more infantry painted but next month I’ll be switching it up as I aim to add another (yes, another) Doomsday Ark to the forces of the Nihilakh Dynasty. 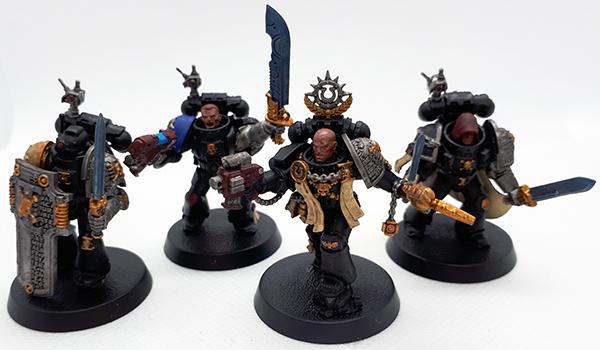 This month I painted a Chaplain, a Watch Sergeant, a Black Shield, and a regular dude. In the end I’m not happy with how some of the accessories look but deadlines are deadlines. I experimented with sub-assembly this month and found it very beneficial; I even managed to attach the correct limbs to the correct bodies! My current plan is to do a second dreadnought next month – though first I need to work out how to make it visually distinct from the first.

Ed’s note – here’s the text I received from Julia as she sent it:

Totally Mulligan – but I have made massive inroads with my Poxwalkers, of which I now have 30 constructed, and half painted. So shut up Stu I will have an army with 30 Poxwalkers.

This month I painted the tech-priest and a squad of Sicarian Ruststalkers. Guns for show, knives for a Pro! They turned out well but I lost count how many times a snapped the swords! Tech priest was good practice for painting Belisarius Cawl next month!

Ed’s note – Here’s Adam’s finished Riptide and Commander Farsight. We could discuss the very cool paint scheme, but instead let’s use this space to note that Adam has bet a Tarte au Citron from the local cafe that his finished T’au army can beat Deke’s finished Necrons. Will the sheer power of the T’au be enough to overcome Adam’s tactical ineptitude? Who will win the delicious cakey goodness? And most importantly, has Adam forgotten that Jordan still owes him a Tarte au Citron for an earlier bet? 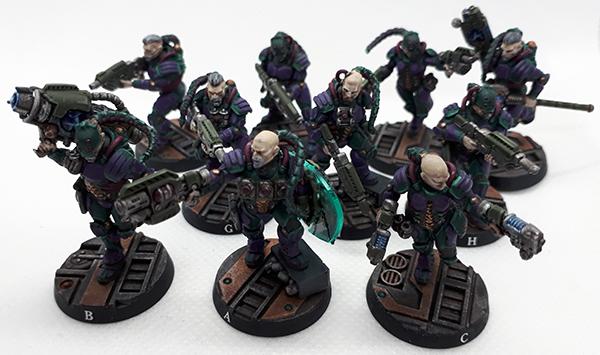 This month I painted my son’s Van Saar gang. Painting and assembling the energy shield was really satisfying – it’s a really eye-catching component. I was dreading free-painting the electric effect on the shock and plasma weapons, but I’m really chuffed at how it came out – especially after a layer of ‘Ardcoat!

Thanks again to everyone for a bumper month of painting progress. The next post will be in four weeks, with more miniatures and more cakes. In the meantime you can get in touch by leaving a comment below, through our Facebook page or by mailing [email protected]m.