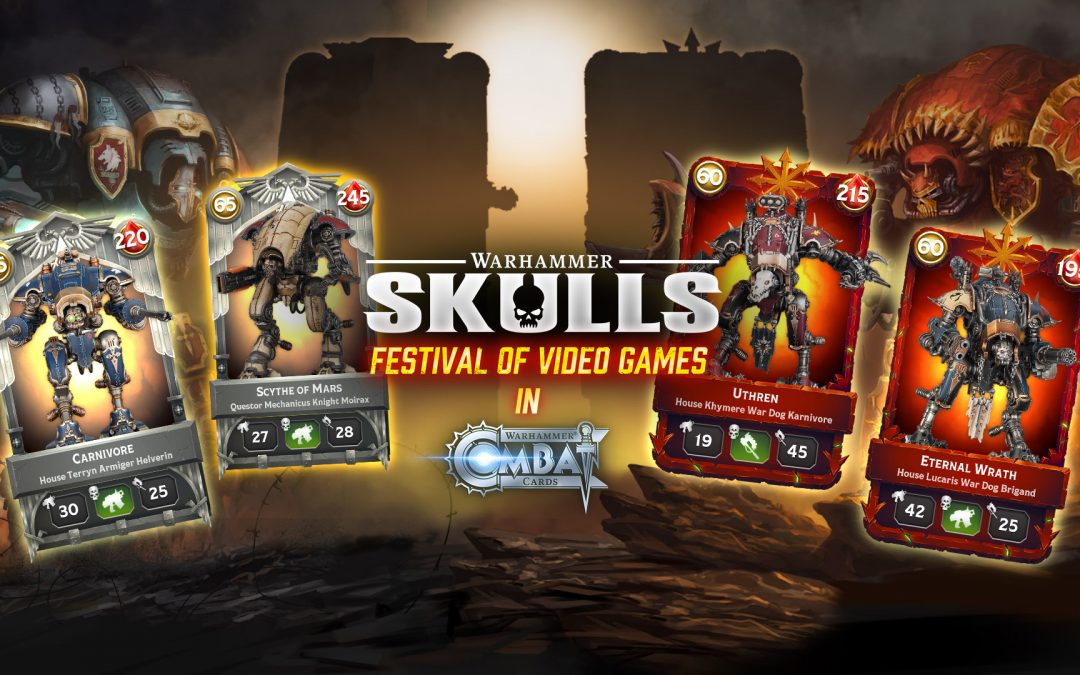 Warhammer Combat Cards is proudly participating in the Warhammer Skulls Event 2022! Having put together a massive event last year, we’re coming back this year stronger than ever, with our biggest event to date.

There’s loads in store – from new cosmetics, new cards, new event types, and a new rewarded Clan Leaderboard feature. The whole event is themed around Imperial and Chaos Knights, who of course have recently had updated rules and models. The UI of the whole game is even being reskinned to match the theme! We’re thrilled to be bringing the latest iterations of these massive war walkers to Combat Cards, and bending the rules of the game in special events to allow you to fulfil all of your Knight-based power fantasies! Big guns never tire, after all.

To sweeten the deal even more, offers active during the week are of significantly enhanced value. In-app purchases of cards will award up to 75% more value than normal offers. Look out for the bundles containing Imperial and Chaos Knight bodyguards to capitalise on these fantastic deals! In total four new bodyguard cards are being added to the game, all of them Knights, and both Chaos and Imperial Knights will have a cosmetic set being introduced as well. Wear them with pride.

There are two distinct types of events running during the whole week – one special event type which grants you temporary control of special event-exclusive Warlords in the form of the Imperial Knight Crusader and the new Chaos Knight Abominant. Battle through this mode to experience the largest conflicts in Combat Cards to date, and puzzle against the challenges we’ve set for you.

The second event type is focused on the release of the full Clan Leaderboard feature. In it, your score will be added together with the scores of your Clan-mates, and together you’ll all earn rewards based on your collective achievements. So – what are you waiting for? Get into a Clan today and start strategizing your best approach to maximising your score!

There’s a bit for everyone this year, and with several free giveaways and awesome deals, there’s never been a better time to get into Combat Cards.

Find out more and stay in the know by joining our Discord or even better, follow our Twitch channel where we will be streaming during the Skulls Event itself!

Combat Cards is available on iOS, Android, Steam and the Windows Store.

About Well Played Games
Founded in March 2017, Well Played Games is a small but experienced game development company based in Leamington Spa UK. We develop a wide variety of video games across a range of platforms. We are an ambitious studio with a drive to create and support high quality serviced games. We believe that if we can create an awesome, supportive and empowering environment for our teams, then success will follow.

About Games Workshop
Games Workshop Group PLC (LSE:GAW.L), based in Nottingham, UK, produces the best fantasy miniatures in the world. Games Workshop designs, manufactures, retails, and distributes its range of Warhammer Age of Sigmar and Warhammer 40,000 games, miniatures, novels and model kits through more than 523 of its own stores (branded Games Workshop or Warhammer), its own web store, and independent retail channels in more than 50 countries worldwide. More information about Games Workshop and its other, related, brands and product ranges (including its publishing division ‘Black Library’ and its special resin miniatures studio ‘Forge World’) can be found at www.games-workshop.com