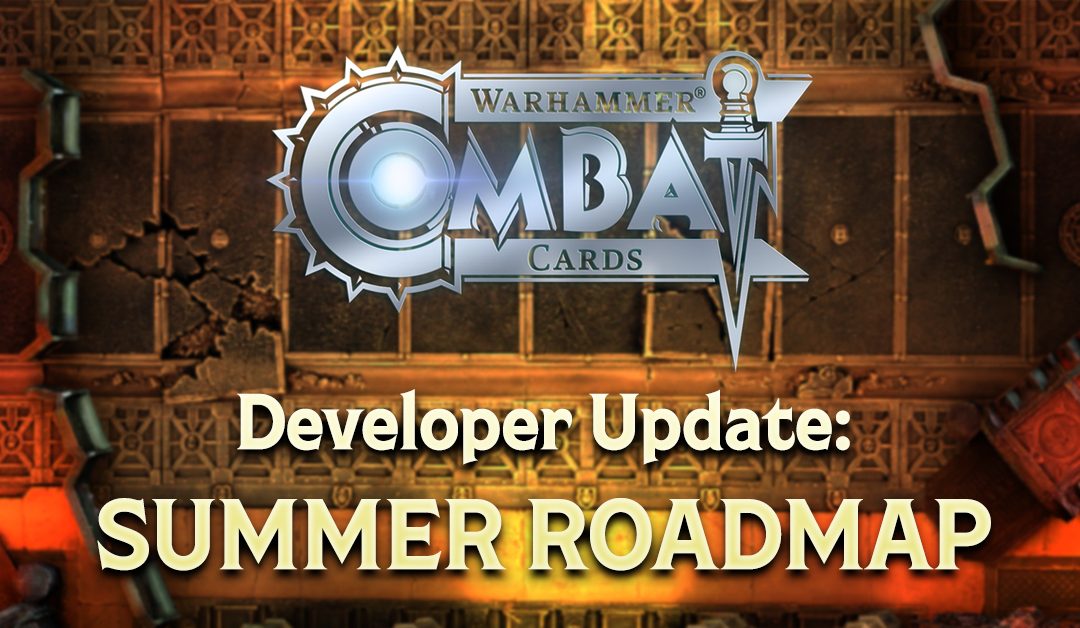 It’s a very exciting moment to be writing this! In this post we’ll be sharing our first player-facing roadmap in quite some time. This is something that many of you have been asking about for a while, and so we are incredibly excited to be in a position to reveal this to you, and invite you to participate in the conversation around the future of Combat Cards.

First and foremost the obvious must be stated – the details in this roadmap are subject to change based on evolving circumstances, and the needs of the game at the time. That being said, we are committed to this roadmap in its current form, and are working flat out to deliver the contents of it to you.

The two main tracks on the roadmap reflect the two priorities that we are focusing on. Blue denotes events, of which we of course have several each week, but highlighted in this leaderboard are the “headliners” so to speak. Looking forward, we have a major event every month for the next few months. We can’t announce all the details yet, but we’re really excited about these celebrations, so keep your eyes peeled for more info on what we have in store for June!

Green boxes on the other hand are feature development work. We spoke in our last blog post (here) about the work we’re doing in consolidating our community channels. The Clan Leaderboard is nearly released, which we’ve also done a blog post on (here). The work to add rewards to these leaderboards is well underway, and you can expect a rewarded leaderboard to drop shortly after the Clan Leaderboard itself.

After the leaderboard, we will shift our focus to another hotly requested feature – the season pass. This will enable players to really feel the rewards of their efforts in a much more direct manner, whilst providing an affordable means of both contributing to growth of the game and accelerating collection progression. The season pass is expected to be in player hands by the end of the summer.

We’ve spoken before about our ongoing work with the economy, and our desire to better reward you for the time you invest. There will be some significant changes landing soon which will increase the amount of coins available to players and generally start to reshape the economy. We’ve heard your feedback about the scarcity of coins and whilst this will be an ongoing piece of work, there are some levers we’re looking to pull very shortly to alleviate the pinch that you’re feeling. Again, we’ll share more detail when these are due to land.

The further into the future the look, the less detail we can reveal to you. Whilst we’d love to talk about the feature work we have planned for the late summer and autumn, it’s too far out for us to give any level of detail at the moment. For now, all we’ll say is that after the season pass we plan on working on expanding the depth of the challenges available to late-game players.

So why are we sharing this? We want to give you more visibility of what we have planned for the game. But also to invite you to participate in the discussion. What are you excited about in this roadmap? Is there anything that you’d really like to see as a part of the features that are coming up?

Make your voice heard! Check out our channels by hitting the various links below, where you can join the conversation. Feel free to join the discussion on Discord: https://discord.gg/9teFN6G or join us on Twitch, where we aim to get a livestream out once a week: https://www.twitch.tv/well_played_games