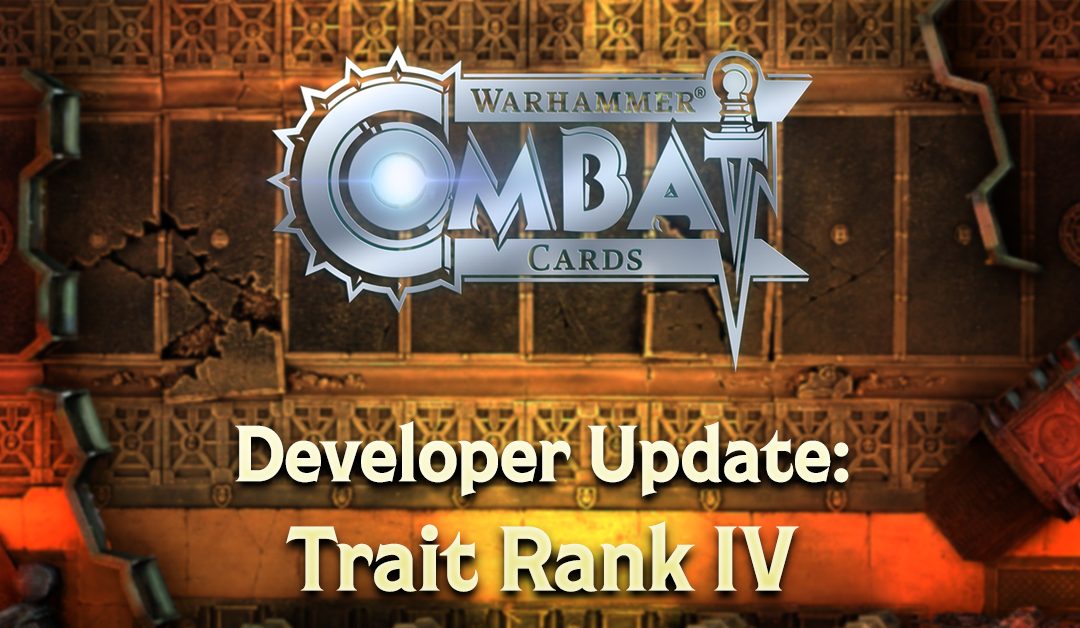 Trait Rank 4 is now just around the corner, and will be arriving next Monday with the change in season. As such we will be rolling the balance changes for Season 16 into the end of the post, and it will be a small one as Trait Rank 4 is a pretty major change, which will need at least a season to settle down on its own.

Traits offer a huge amount of tactics, flavour and personality to a card, but it can take a long time to unlock traits as a new player, and a significant amount of time until you can field a whole deck with traits. Add to that that a lot of traits become impactful when reaching what is currently Trait Rank 2 and we have a system that takes a long time to open up strategically. That’s something we want to fix here and make sure that the full level of tactical play is open to players from the start. By introducing a 4th Trait Rank we’re able to give these tools earlier by moving traits to the front of the upgrade path.

The second element is the power level between Traits. Currently there is a pretty significant spike in power at each trait level. This is partly due to having a small number of fixed increases, its power is going to get exponentially bigger, but add to that the stat increases in between traits, creating a doubling of power output. As such to balance this, as well as adding a 4th level, traits will not follow the current pattern of [0+x, 2x, 3x] but instead [x, x+y, x+2y, x+3y]. This gives us a lot more control and means that by setting the first trait level a bit higher than currently and then have smaller fixed increments from there we can have a much more evenly distributed power increase between the traits.

Which brings on to the final point which is more for us, but it makes balancing much easier and fluid. A lot of the time when trying to create or balance traits the base value and increases can be a real headache between too strong/too weak but with this new flexibility we should be able to get a huge amount more precision in these changes.

How’s it going to work?

So the most important thing to say straight away is that the number of levels and cards needed to full level a card will not change. Your cards will remain the same level they are currently and there will be no changes to the amount of copies held, upgrade costs or anything like that.

To allow the space for this additional trait upgrade for commons and rares, the first stat upgrade of each of these cards will be added to their base stats.

Here are the new upgrade trees for each rarity:

What’s also a nice bonus is that as you can see it’s allowed for very even stat upgrade spacing meaning the card progression so feel very uniform across all rarities.

So what most of you have probably been keenest to find out, how is this going to affect trait values going forward? Here is the full list of the new trait values:

As you can see a lot of the traits max value is remaining the same and that is due to the fact that a lot of the traits are currently in a great place. The damage traits (Furious Charge, Precision Shot and Warp Surge) have all seen an increase, which we feel is needed. Shield has also increased, and the main reason for this was that a lot of the newer traits have really brought down its effectiveness and so with it being one of the oldest traits that has slowly become less useful it felt reasonable to give it the bump up.

The final most significant changes are to Taunt and Target Acquired. Both of these traits will now last a fixed two turns from the first trait level with the damage decrease for Taunt, and a new damage increase for TA being the only variables. This should make Trait Rank 1 for both traits much more useful as it means that you guarantee to cover both yours and your opponents turns.

With that, we rounded off all that we need to cover on Trait Rank 4. Needless to say there’s a lot of change here and we’re really excited to see how this improves the game for players at all stages of the game.

As mentioned at the beginning because of the game wide changes that Trait Rank 4 is going to bring we’ve only got a very short list of bodyguard changes this time round. Additionally there will be no warlord changes for the moment either, as Traits and Special Rules often have an impact on each other and so it makes sense to let this settle first.

Haarken Worldclaimer – Herald of the Apocalypse
Stat Change: +4 Base Range, +4 Base Melee

That rounds off the balance change and the blog. Really looking forward to Trait Rank 4 and the core change this should offer to the game.