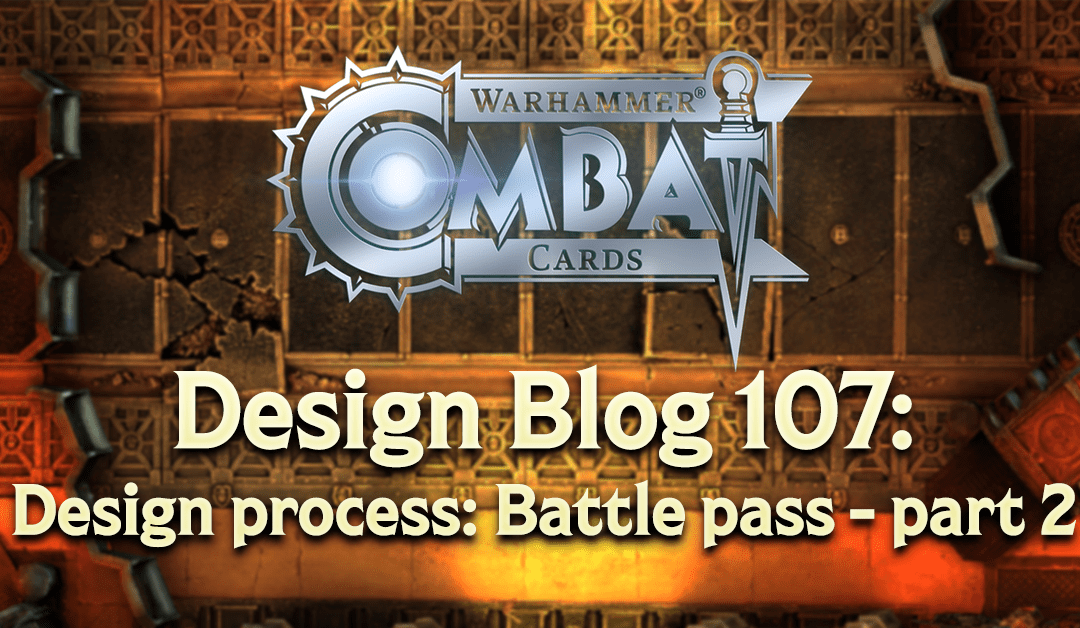 A few weeks ago I talked about designing a battle pass for Combat Cards – not to confirm exactly how that feature will work but to look at how I approach designing something new. Let’s continue by looking at what the battle pass is not and how I know that.

When you first approach a new feature you tend to look at how other games have handled similar problems because they were trying to solve the same problem or achieve the same goal as you.

That tells you how game A solved problem B, but it’s dangerous to straight up copy their approach because your game probably has a different audience, your gameplay loop works differently and so on. Instead you’re trying to extract what makes their approach fun or clever and whether that can be applied to your game too.

All that basically means I looked at a lot of battle / season passes before coming up with an initial proposal, then mocked that idea up as quickly as possible. This both helps me crystalise the idea (even a mockup of a feature often shows you problems you need to solve) and so I can more easily share the idea with others (otherwise I’m just waving my arms around going ‘imagine a thing’).

It’s important to do the mockup as quickly as possible because it’s just an idea at this point – something to discuss and see if you’re going in the right direction. To prove that point, my first three versions were rejected.

I proposed that we tie the battle pass into the player’s daily Objectives, requiring players to complete those Objectives to progress through the battle pass rewards. While this would be pretty easy to implement it raised the potential issue that we’d also want to rework Objectives to ensure they were all as easy to finish as each other, took the same amount of time, etc. As we have higher priority work than looking at Objectives right now this is an obvious flaw.

So if we don’t want to put all of the weight on Objectives, how about rolling everything a player does when they play a session into the battle pass? For example, we could say that opening a free or kill pack, completing an Objective and so on all give you progress towards the next battle pass reward. But while this does nicely unify all of the player’s ‘session goals’ into one place it’s going to make that place quite messy and complicated, with lots of trackers saying ‘do this’, ‘do that’ and so on.

Such user interface problems can be solved, but we came to the conclusion that the goals of a Combat Cards session aren’t that complicated for players to track and that our audience may enjoy setting their own goals and priorities anyway.

Rather than how you get it, I started to think about what the ‘thing’ is you need to progress through the battle pass. We already have XP, energy, coins and Plasma, so don’t want to muddle this new thing up with any of those in the player’s mind.

What about Blackstone? It’s a material from Warhammer 40,000 lore and has already been established as being important to many of the 40K factions. And because Blackstone is a physical thing (as opposed to the more conceptual ‘XP’) that lead to thinking of ways the player could earn it. This definitely pushed us away from using Objectives and other such goal orientated progression, because there’s no point having to explain how completing a daily goal poops out some Blackstone if you don’t have to.

This leads us to the current iteration of the idea, where players do what comes naturally in 40K to achieve their goals – they kill stuff. The current proposal is that destroying enemies earns you an amount of Blackstone and you use that to progress through the battle pass rewards. There are still many, many questions and edge cases to be solved here but that process is what turns an idea into a design.

However, that doesn’t mean this is the final design for the battle pass. While versions one to three were shared with a few relevant team members for feedback, a ‘final’ direction has to go before the entire Combat Cards team for dissection and discussion. If the idea survives that then it will be discussed with Games Workshop to gather their feedback, and then finally it might become the finished direction for the feature.

More on next steps and other disciplines getting involved in a future blog, but for now I hope this rather long winded post gives an idea of how I approach designing a new feature – starting with the WHY before worrying about the WHAT or HOW.