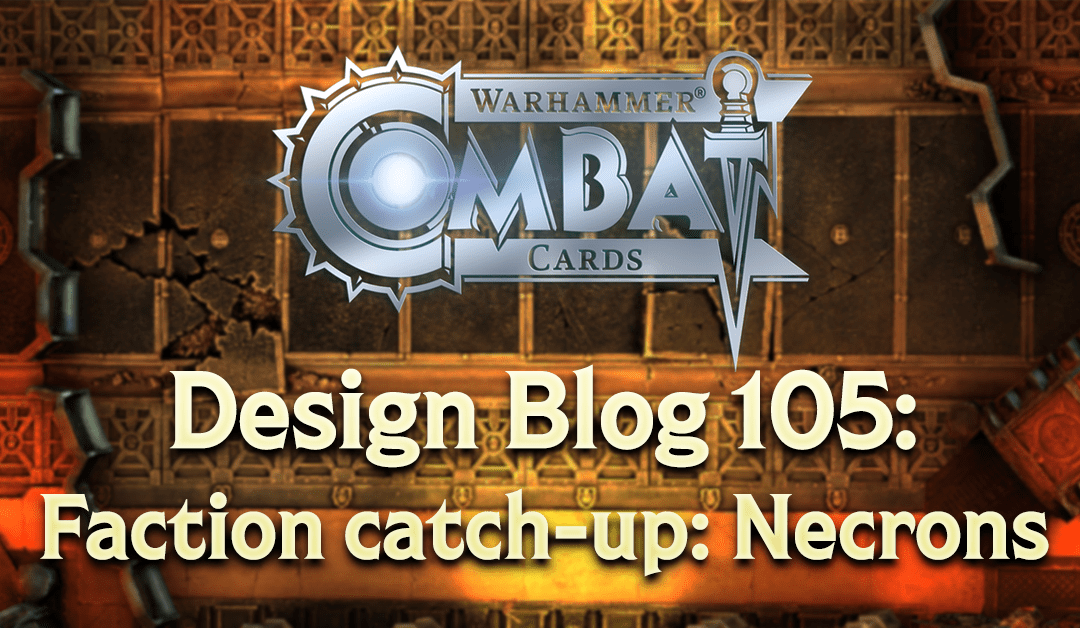 Welcome to the latest faction catch-up, taking us to mid-way through our look at each faction’s current state.

As a quick aside, I received some feedback that these catch-ups aren’t terribly useful because they’re posted every other week and are using data from a couple of months ago. With that in mind, the next time I run a catch-up I may try making it an overview of all eight factions in a single post, but I’m still going to finish this series because while the data might be a little out of date I don’t think any faction has changed so fundamentally in the last month that these posts are no longer relevant.

So let’s shake our robotic fists at these damn kids messing up our galactic neighbourhood and take a look at the Necrons. But rather than run through the usual topics, I’m going to focus on one key area:

Decks with Necron Warlords have a low pick rate of 8%, and this could be caused by a couple of things:

First, they have the least cards of any faction – including just one Epic card – which limits their flexibility.

Second, the Necron faction is the most expensive in terms of points cost (the average Necron card costs 29.9 points), another factor which limits their deck building.

But I wonder if the biggest issue is their playstyle. With no psychic cards and Warlord special rules that encourage long, slow battles, the Necrons win by grinding their opponents down over time. While this is thematically appropriate it does mean that using a Necron deck takes patience.

To reinforce this, Necron decks Ready more than any other faction (36% of the time) and choose to make psychic attacks 21% of the time even though their psychic damage output comes to 0%.

All of the above means that players don’t tend to choose Necron decks unless the Campaign or their daily Objectives require them to.

That said, when they are used Necron decks have a decent win rate of 55%, and a pretty good split between damage types (51% of their attack damage is from melee and 49% from ranged). This means we can’t blame them being ineffective for their low popularity.

So what should we do with the Necrons going forward, because while their slow, inevitable grind to victory fits the lore, no-one wants a boring faction in the game.

Unfortunately it’s not as easy as simply giving them some fast, high damage cards – the Necrons have some extremely cool miniatures and units but they’re definitely not one of the largest Warhammer 40,000 armies. Obviously we haven’t yet included every option they have, but Necrons aren’t like the Space Marine, Servants of the Emperor or Chaos factions where the game will break before we run out of new cards to add!

At the moment I’m thinking we go back to the Necron’s ‘basic’ choice and add more copies of Warriors and Immortals, with each coming from a different Dynasty so having slightly different stats and traits. While this may not be as cool as adding loads of varied cards, it will drive the faction’s average points cost down and let players field big decks of troops under an overlord, which is at least thematically cool.

I’d be interested in hearing from you, the players. Would you rather the faction stayed small and elite, slowly growing as we add new Necron cards? Or have the faction’s size  bolstered with several Warriors and Immortals, expanding the faction at the cost of variety?