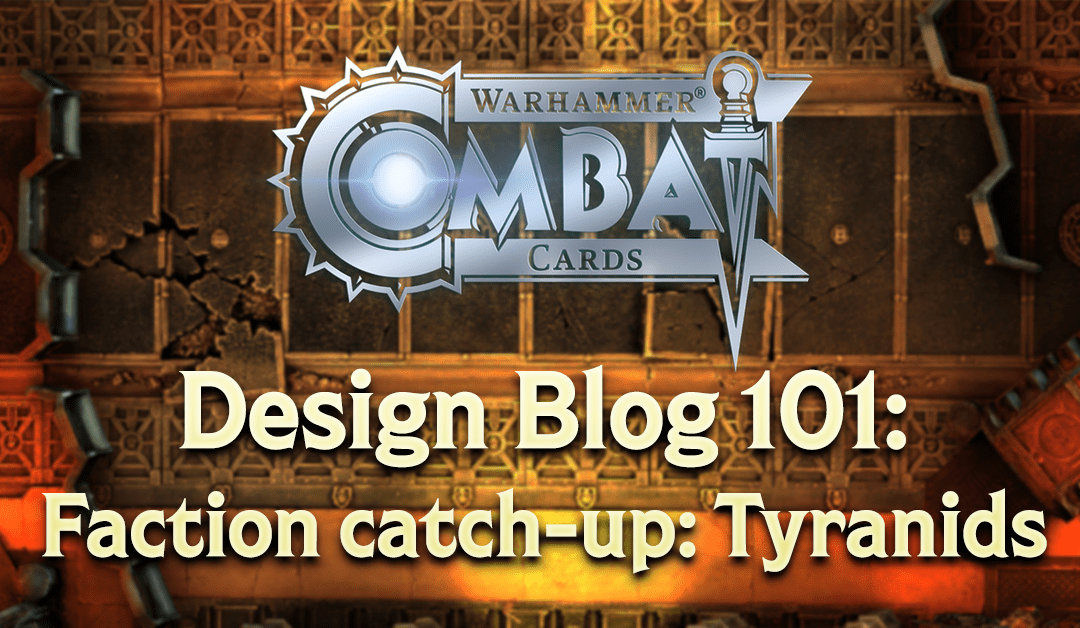 Following the Chaos and Aeldari catch-ups, this week we’re looking at how the Tyranid faction is currently fairing. As before, these stats only reflect ‘normal’ battles, and they cover any deck with a Tyranid Warlord, even if it also includes Ork or Chaos bodyguards. The stats were all gathered in October 2019.

So in the spirit of the Tyranids let’s evolve into the perfect stat reading organism and get started. Hnnnngh… Pop! Done!

The Tyranid faction has a very slightly high pick rate of 12%, meaning they’re popular with players, and that’s probably because they have the second highest win-rate in the game (second only to the T’au) of 70%.

This reflects the nice combos you can set up with the Tyranids, that they’re active with all three attack types and that their Warlords are pretty nasty – particularly the Genestealer Patriarch Ghosar in the early game.

Interestingly, Tyranids are the second least aggressive faction (in terms of the number of times they attack versus Readying), with them attacking 72% of the time. Only the Necrons Ready more often, showing that even though they fight very differently, both factions focus on grinding their opponent down over time. While this nicely reflects Warhammer 40,000 lore, we’ll need to be careful that these factions don’t become too slow and dull to fight with or against.

Tyranid decks choose to make melee attacks 42% of the time and it accounts for 65% of the damage they deal. Conversely they choose ranged attacks 37% of the time but it only deals 18% of their damage. This is likely related to the above notes on the effectiveness of their Warlords, with players using ranged attacks to build a strong melee buff for Ghosar, or letting the Hive Tyrant’s automatic damage each turn wear enemies down.

They select psychic attacks the most (24% of the time, which is joint first with Chaos), and deal the second highest amount of psychic damage at 17%.

Tyranids have 18 cards in the game, with the following card rarities:

Tyranid cards have an average point cost of 26.5, which is the second highest in the game. This is interesting because they have a high
win-rate and the other faction that does very well is T’au, which has the lowest average point cost at 18.3. This demonstrates that there are multiple viable deck-building strategies in the game, with the caveat that these decks can contain allies from other factions.

So what does all this tell us? In something of a recurring theme for Xenos factions, we need to add more Tyranid cards to the game. Some lower point cards would be good, but their high current costs definitely aren’t causing win-rate problems. More Epic and Legendary Tyranid cards are needed, which is tricky because they’re not a faction with many unique ‘heroes’.

Anyway, hopefully you guys are finding these catch-ups interesting and useful. I just wanted to thank our analyst, Pete, for his help in gathering these stats and spotting trends with each faction. If this sort of detailed post is popular then we’ll look at more stat based insights in the future, such as breaking down a weekly Campaign (which was suggested by reader NeckbeardPapa a couple of weeks ago, proving that we take your comments on board).