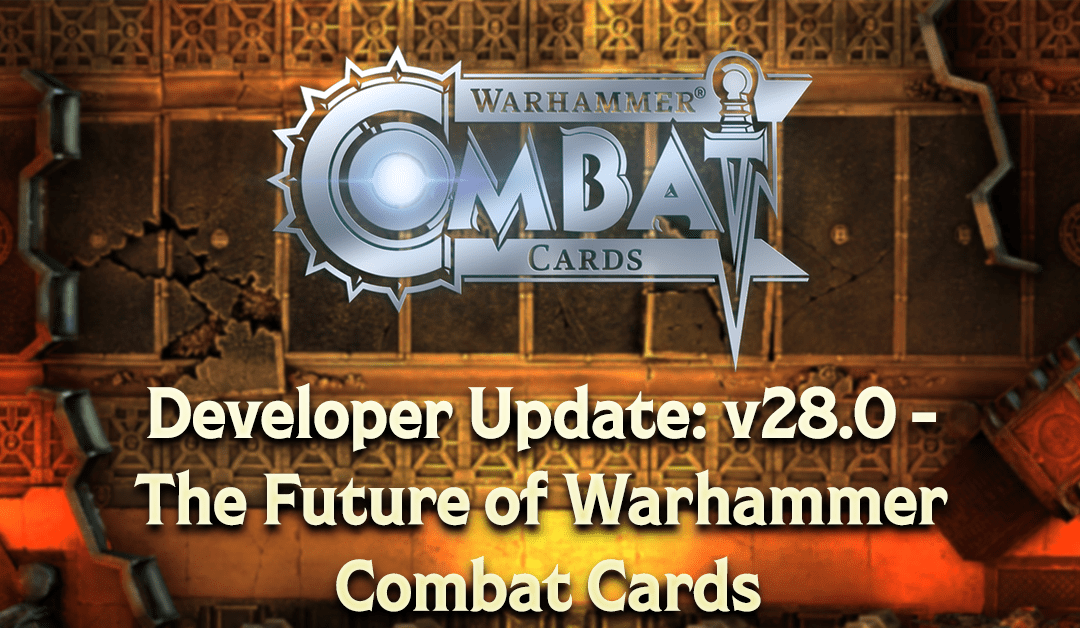 Welcome to another Developer Update! Version 28 is now live, and with it comes a number of improvements and fixes in various areas of the game. The team has been busy laying the foundations for some awesome upcoming features, and with this update we wanted to break the usual format to instead give you all an insight into the future of Warhammer Combat Cards.

Some of you will have noticed that the account linking feature that came in Version 27 has been temporarily disabled. Unfortunately we found an issue that has been affecting a small number of users and we felt it best to turn this feature off while we investigate what is going on. We will update you all once this issue has been fixed, and we apologise for the delay. In the meantime, you can send Customer Support a ticket from within the game to deal with any account issues you might have.

Right then, now to the good stuff!

Many of you have sent questions asking about whether or not we are considering particular features, so we wanted to let you all know about some of the things that are coming up over the next few months. There are some things we’re not quite ready to announce yet so there’ll be plenty more to come after all of this, but first let’s talk about the main feature in this release, which is one many of you have requested.

With version 28.0 you are now able to view every card, regardless of whether or not you have unlocked it. A handy rank icon on the front of the card will let you know at what rank this card can be found in ‘rank locked’ packs, and this icon even shows up on cards that you may have found early from one of the ‘rank unlocked’ Campaign packs. Now that you can see all of the cards available you can start planning your dream deck.

So what’s coming next? Well we’ve got a number of features lined up, some of which are short-term goals while some are pretty huge updates that are a little further out but we believe will definitely be worth the wait, so without further ado, let’s get into them!

Coming soon will be a much-improved filtering system, allowing you to organise your cards to suit your needs and assist you in easier deck building. This should make finding cards with particular Keywords for your next Mission objective even easier, and if you’re a numbers fan you’ll be happy to know we will be introducing an option to easily see each card’s stats.

We’ve received numerous bits of feedback regarding card balancing and where players feel there are issues at the moment. The first part of this was to introduce new cards for some of the less populated factions that players could earn via the Mission system. These Mission rewards will go into the main card pool with a rank requirement for those who didn’t manage to win them from the Missions.

The second part is to review win rates and general feel of the cards and special rules that exist in the game. While some cards are deliberately not as strong as others so as to allow for cheaper costs and different deck building options, some cards are definitely over or under-performing. Expect news on our next balance pass in the coming weeks.

Alongside these features we are striving to ensure you have the best experience possible when playing Warhammer Combat Cards. We are working hard to eliminate errors that many of you will have seen such as the server struggles when Campaigns launch, and the dreaded ‘Battle not found’ and ‘Object reference not set to an instance of an object’ issues. These problems are as frustrating for us as they have been for you, but we are hoping to have these energy-stealing bugs eliminated as soon as possible, and we appreciate your patience while we work through them.

One of the biggest requests from players has been the ability to skip Objectives that they are struggling with, and we’re pleased to announce that this feature will be available in the next few weeks. The finer details of how the system will work will be discussed soon but know that we are listening to your requests and are looking forward to getting this feature out to you all!

Currently your Warlords will remember the last set of Bodyguards that you assigned to them, allowing for quick swapping between Warlord in between battles. While this is a useful feature, you have been calling out for more options to create multiple decks, and we are listening. We are currently investigating the best way to handle multiple decks alongside our numerous Warlords to bring you a versatile deck building experience.

Many of you are already using traits to great advantage, whether it’s a brutal Furious Charge pulverising your opponent’s deck or well-timed Shielded card blocking that crucial bit of damage to win you the game. Well just as you’ve gotten used to the traits already in the game, we’re bringing some more for you to get to grips with! Four more, to be exact. We will be going through the card collection already in game and assigning these new traits to cards that make sense thematically, so keep an eye out for any changes and plan your tactics accordingly! There will be even more Traits added in future updates, but for now here’s a sneak peek at the icon for one of the new Traits being added next month. Any guesses?

Along with new Traits, we also plan to introduce new Warlord cards to make your decks more diverse and give you more ways to play the game. In order to get these Warlords ready for battle, we are working on our brand new battle system which will allow us to do a lot of interesting things with the game, including some very cool Special Rule mechanics. We will post another update in the future detailing who these Warlords are and what awesome new rules they will bring to your decks.

We are super excited to reveal to you all today that one of the next big features for Warhammer Combat Cards will be a dedicated Seasonal Ranked mode! As you wage war across numerous arenas you will win rewards for each stage you conquer, racking up Thrones (a resource some of you might recognise as the standard Imperial currency in the Warhammer 40,000 universe) as you fight other players to make your way to the top and battle it out for the coolest prizes. I won’t give away too much about what those prizes are, but they look amazing.

We’ll be revealing more information about Ranked Mode on the blog in the near future.

Alongside Ranked Mode we will be introducing new Player Profiles. These will allow you to inspect other players and check out things like win-rates, favourite factions, current deck, and many other stats. It will also bring with it some other new features but we’re not ready to reveal those just yet. Watch this space…

As you will undoubtedly be aware, there has been lots of talk about the Clan feature. Lots of you are looking forward to finding a place to call home where you can chat with like-minded players, discuss strategy, donate cards to others, and more. The team are hard at work putting our Clan system together, and we look forward to getting this feature out to you all toward the end of the year.

So as you can see, there’s a lot of things going on behind the scenes that the team are working through. We want this game to be as good as it possibly can and we’re very eager to deliver features that are in high demand as well as other things that haven’t been mentioned yet, and we appreciate you all enjoying the game while we bring these features to you.

Why not head over to our in-game forums, r/WarhammerCombatCards, and Discord for discussion and let us know what you think of the upcoming features?