And so we come to the final faction drill down, covering the T’au. 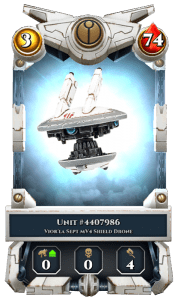 As with the other factions, we aim to have the T’au fight like they do in tabletop Warhammer 40,000 – so they favour ranged combat and their forces tend to be made of expensive but tough battlesuits, backed up by cheaper infantry.

While it can be tempting to jam as many high-power, high-Wound battlesuits into your deck as possible, this can leave you with too few cards, forcing you to deploy your Warlord early (more on Warlords below).

Instead, you’ll need to balance cards which anchor your line, with cheaper support whose role is simply to wear down the enemy while the big cards inflict damage. Consider cards like the Shield Drone for this, as when upgraded it has a ridiculous number of Wounds for such a low points cost.

Another factor you might want to consider is how to use the melee and psychic attack boosts you’re building up each time you choose to make a ranged attack (each turn, the two attack types you don’t select get a damage boost, making them more and more powerful until you finally use them).

We’ll cover psychic attacks below, but it may be worth including at least one melee focussed card in your deck, which you can deploy late to use that powerful attack you’ve been building up. The Kroot Shaper is a good pick, as will be the upcoming Commander Farsight.

You can get around this by including Aeldari allies, a faction which features several powerful Psykers. The downside is your allies can’t benefit from your Warlord’s special rule (more below).

Your second ally choice – the Necrons – don’t broaden the T’au’s tactics (as they also have no Psykers) but they do synergise well. Mixed T’au / Necron decks can be very powerful in ranged combat, and Necron cards tend to be at least as tough to kill as the T’au. 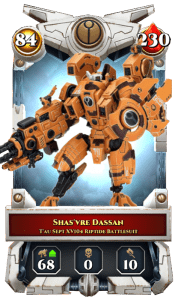 Finally, a note on T’au Warlords. Both Commander Shadowsun and the upcoming Commander Farsight heavily lean towards one attack type, so naturally you should build your deck around them.

For Shadowsun this is ranged attack, so obviously she pairs well with a lot of T’au cards. Something to consider is her Warlord special rule, which heals and hugely boosts T’au cards on the battlefield at the moment your deck is emptied (i.e. your last card is deployed to the battlefield). If you can set this up correctly, your opponent will spend ages knocking Wounds off a huge T’au monster like the Riptide, only for you to heal (and boost) it.

On the other hand, Farsight will be melee focused, which as discussed above, means he can use that huge melee attack boost you’ve been building up. If you include some melee based allies with him you can deliver a single knockout blow – the trick is timing this so you don’t waste it on weak enemy cards.

The T’au faction relies heavily on deck building strategies, making sure you have enough cards to keep the enemy busy, but not so many you’re at the mercy of the cards you get dealt. They also need thought on how to defeat and utilise melee and psychic attacks – but if you can set up a clever combo the T’au can be extremely powerful and tough to destroy.

Thanks for reading, and I hope you found the faction drill downs useful. I intend to revisit each faction in the future – when they have a substantial number of newly added cards and Warlords – to look at how they’ve evolved and any new tactics which have appeared.

In the meantime, you can find the other faction drill downs here:

As ever, if you have any questions, or have a cunning deck-building or battle tip you’d like to share then please mail [email protected] or visit our Facebook page.