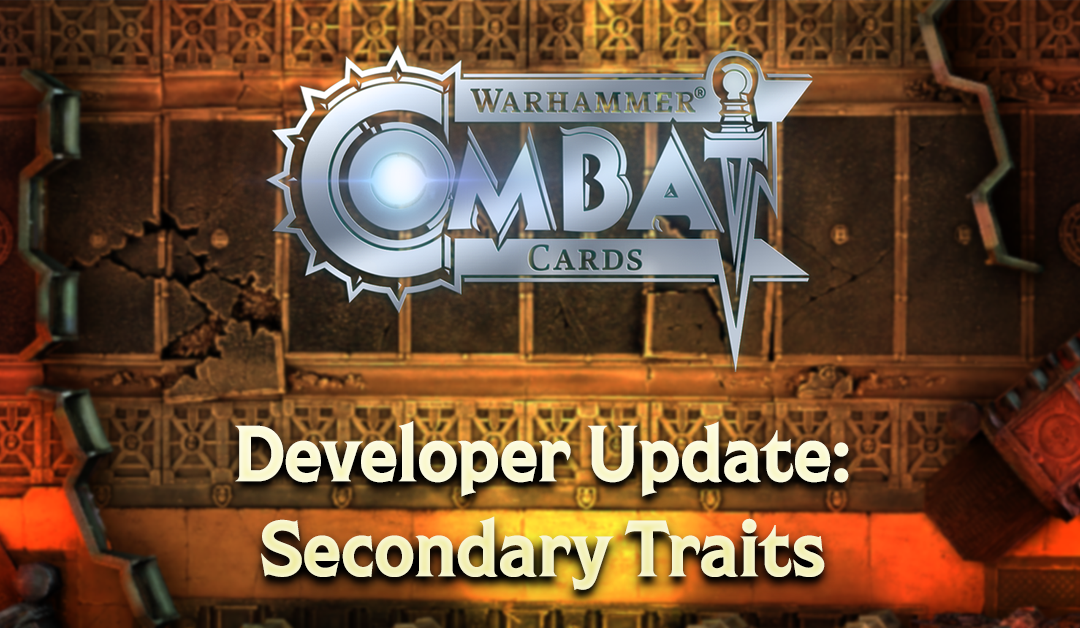 This has been a while in the works, but we’re incredibly excited to be releasing secondary traits for Epic & Legendary cards! This will launch in-game next week (week commencing 21/11/22). We’ve teased this before, but there were some difficulties during development of this feature, compounded with us pushing to release Leagues of Votann, which pushed timelines back. This feature was originally intended to include a cosmetic level, but we’ve separated this out in order to deliver secondary traits earlier – see all this and more in our recent Roadmap blog!

This feature effectively changes the upgrade trees to give Epic and Legendary cards access to a second trait. Epics will be able to upgrade their second trait to Trait Rank 2, and Legendaries will be able to level theirs right up to max at Trait Rank 4. This adds a whole new dimension to deck-building and gameplay and we expect this to have quite an impact on how you approach the game. In previous blogs we mentioned that we’d be looking to make ‘Legendary cards feel more Legendary’ – adding these secondary traits is a follow-up to that and cements these higher rarity cards as having more potential than their Common & Rare counterparts.

To build these secondary traits in, we have extended the upgrade tree for Epics & Legendaries, but you’ll be pleased to hear that the second trait will be available in the existing levels, and won’t be stacked at the end of the tree. We’ve had a lot of fun implementing and testing this, and we want it to be accessible as a feature to more than just those with very advanced collections. As part of building these into the existing tree, we’ve made some adjustments to progression in these trees, but we’ve tweaked the numbers so that none of your cards will lose stats or trait levels as part of this change. No matter what level your Epic or Legendary is, they will have the same stats/traits, if not more, in the new tree. See ‘The transition’ below for more details on this.

In our testing, we’ve found that battle lengths haven’t been affected by this change, but this is something we will keep an eye on once this is out in the wild – along with balance. We have also carefully vetted the combinations of traits to avoid anything that creates a particularly frustrating experience (e.g. Fear & Regeneration).

Common and Rare trees aren’t completely untouched though, we’ve introduced a new Omni stat upgrade level, which gives a smaller stat increase to all card stats. This is primarily to break up the harsh increase in upgrade requirements between Trait Rank 3 & Trait Rank 4. The total cards and coins needed to max out a Common & Rare is exactly the same as before, we’ve just reduced the requirement for the upgrades at the end of the tree and snuck in this Omni upgrade to ease progression for these cards. As you’ll have spotted in the image above, these also feature in the new Epic & Legendary trees.

When we flick the switch for this to go live, your cards will remain the same level as they are now. Due to the changes in progression, upgrading to certain levels will require less cards and coins than before. We’ll be refunding both the excess card copies and coins that you’ve already spent automatically, so that no-one loses out from this change. The key takeaway here is that your cards will be the same or stronger, you might just have to upgrade them with the cards copies & coins we’ve returned to you.

We’ll do some follow-up blogs shortly to show what combination of traits each card will have, so you can start planning ahead for any strategic changes you want to make to your decks. In the meantime though, if you just can’t wait to see this in action, you can catch our latest Twitch stream where we showed these off for the first time: https://www.twitch.tv/videos/1655429666