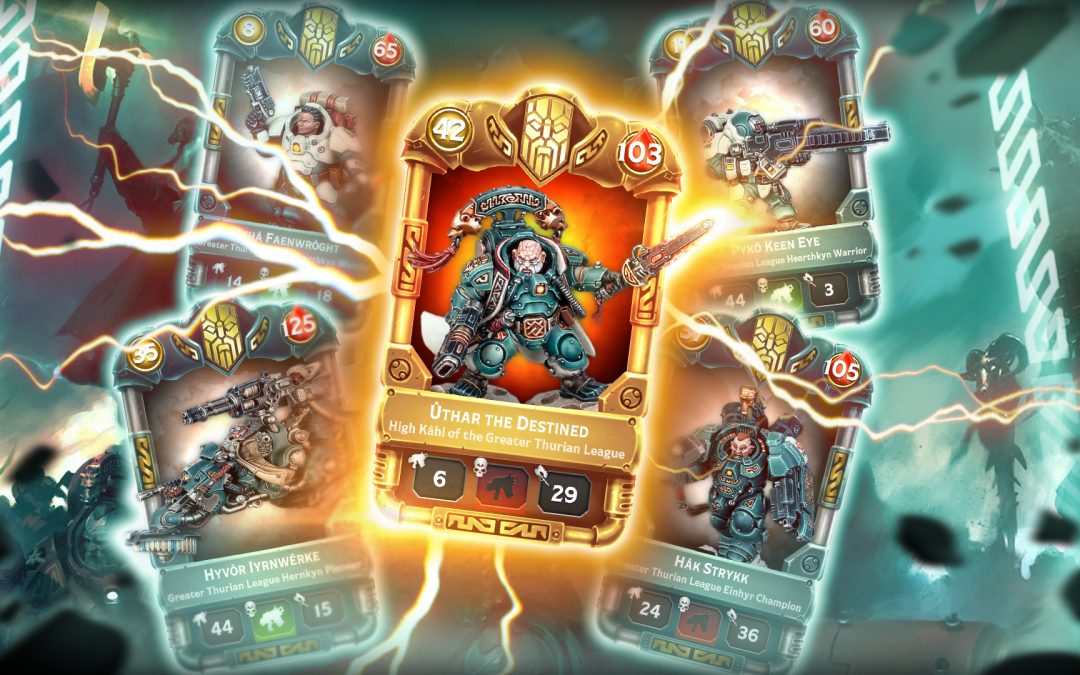 We’re very excited for a very big announcement, the introduction of our 9th faction: The Leagues of Votann! This is the first time we’ve introduced a new faction since the game launched back in 2019.Now it may surprise some of you to know that we actually made this announcement in April last year:

Little did we know that our April Fool’s announcement was in fact brewing away behind the scenes at Games Workshop HQ and now we have the first release of the rebranded Leagues of Votann arriving to the tabletop and Combat Cards!

The excitement on the team has been not only just to see one of the long lost, and well loved, factions of Warhammer 40,000 return, but also that we are able to get them out in the game, to you the players, at the same time that you can get your hands on the physical models. This will make us the first digital game to fully support the brand new faction, and gives you a chance to start playing with them from Day 1! Something we’re really proud of.

So what are the Leagues of Votann going to play like? Well, for those of you who don’t follow the tabletop, they’re a hard hitting, resilient army that has a balanced mix of ranged and melee combatants and a strong roster of vehicle support. We’ve tried to reflect this in the cards as well so you’ll find a good mix of both strong ranged and melee cards, and with a slightly higher than average wounds count. Expect a faction that can quickly change from one attack type to another, and absorb a decent amount of damage.

Now on to the first reveal…

I’m sure everyone will be most interested in the new Warlord we’ve chosen to lead the Leagues of Votann. While there is a large selection of HQ choices to choose from the obvious pick was the one named character that has come with the initial release and that is: High Kâhl Ûthar the Destined!

For those of you who don’t know much about him here’s his lore text from the back of his card:

“As the most accomplished hero of the Greater Thurian League, Kâhl Ûthar the Destined is marked for greatness. Few can assess the foe as swiftly or mercilessly as Ûthar and – once he has his enemies’ measure – he soon cuts them to pieces with the glowing Blade of the Ancestors.”

Now onto the good part, let take a look at his Warlord Rule: Eye of the Ancestors

This should prove an interesting shake up for the defensive traits that a lot of the strongest cards rely on. Notable wording to pay attention to is ‘when it is damaged by an attack’, so it will always work against Fear for example, but against Shielded it will have to inflict damage to the card before the rule will trigger.

While this is certainly a strong ability it is limited by the death of your own cards, and can be circumvented by not having cards directly killed by an attack, such as Warlord Rules and Poison. This means there is a tactical challenge both playing as, and against, Ûthar. This rule will allow for the desired attack flexibility for the faction, where cards with weak secondary attacks are able to deal significant damage to the opponents key cards in the later stages of the battle.

Now let’s have a quick preview of the Bodyguard cards coming out for the initial release:

We’ve got ten bodyguards arriving with Ûthar, with a range of different costs allowing for a good amount of variance between several 8 or 9 card decks. Due to the initial army box release, we’ve had to rely on the basic warriors unit, but with the unique loadout options we’ve been able to provide a different thematic trait for each model, and allowing for a flexible toolbox with the cheaper cards.

As we match our releases to Games Workshop’s model releases, we are currently restricted around the number of models we can add to the game, but we’ll be adding new waves of Leagues of Votann cards as and when they become available. Due to their current limited release they will not be getting some of the features of the existing factions, such as Clan Dedications, but these will be added in time once we’re able to release the complete range.

To summarise, this initial release is very much the same as Games Workshop’s – an initial introduction to the new faction, and one which we plan to follow up and expand upon quickly. We are excited to have a brand new faction to play with and excited how, even with this limited release, we can find a niche for the faction to fill and have a meaningful impact.

Make sure to log on this weekend where every player will have access to the new cards for a limited event and get to test them out, as well as a chance to add them to your collection permanently. As always, let us know what you think as you take the Leagues of Votann into battle!