Road to Clans: Part 3 – Looking Ahead 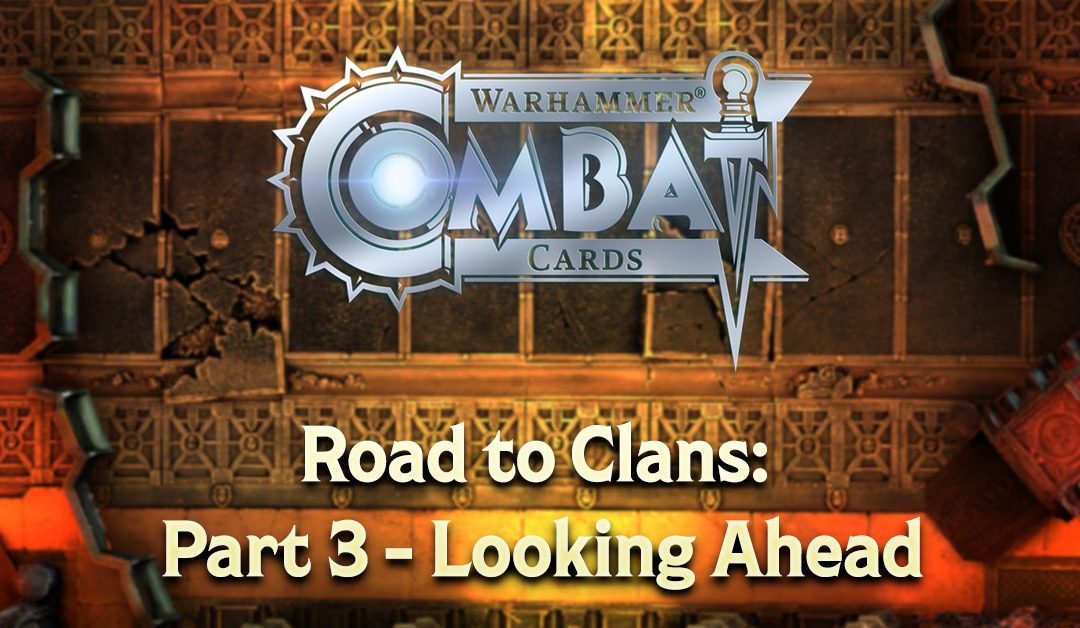 Welcome to the third and final instalment in our three part series looking at the Clans feature in Warhammer Combat Cards. Up until now we’ve talked about the effort it took to build the infrastructure to make Clans possible in Part 1 – Foundations and the various features included with Clans at launch, including the awesome Dedications system, in Part 2 – Beginnings so go check those out if you haven’t already! For now though it’s time to talk about what the future holds for Clans.

Those of you who have followed our blogs, engaged in discussions with us in different social media platforms, or simply seen the changes we’ve been making to the game, should not be surprised that one of the areas of the game we want to explore is the ability to add true player versus player battles in to Warhammer Combat Cards. Playing against other player’s decks is fun but sometimes some rather interesting play choices can be made by your opponent when playing versus an AI. This is done deliberately to a degree as playing against a perfect AI opponent would not be truly representative of playing against another person; we all make mistakes in our gameplay from time to time after all.

But I digress. What does this mean for Clans? Well today we can announce that Clans will be the first place to try true player versus player gameplay using our new Friendly Battle system.

You’ll soon be able to challenge other members of your Clan to a Friendly Battle, pitting your deck against theirs. Maybe you want to try a new and experimental T’au deck. Maybe you want to see if your new idea for a Psychic Link strategy works out how you thought it might. Friendly Battle will be a great place for this as you invite others to take on your army before chatting post-battle to tweak your deck, talk strategy, and maybe even issue a rematch.

The current battle structure will be tweaked slightly to allow for a PvP ruleset, but we’ll have more details on this in a future blog post. This is about Clans, after all.

Clans as a feature is still very much in its infancy, and there’s a lot of scope for us to add content in the future. The shape of this content is still being discussed, and so I wanted to invite some of the members of the team (and myself) to talk a little about what they might like to see in Clans in the future.

Thanos: I’d like to see a way for clans to work together collaboratively against a much bigger threat! We’ve shied away from putting Lords of War into the game but a Clan-level event seems like the perfect opportunity to bring the big guns out. It’d be really great if we could make taking out these behemoths tactical.

Tom: I’m really looking forward to any features that help personalise Clans and make them feel more distinct from one another. Dedications is a good foundation for this, and I’m interested to see how we can build on it to create more interesting Clan-based missions or objectives that feel relevant to your Clan, as well as visual flavour and customisation.

Cili: I think it would be awesome to see a Clan Wars feature, where clans battle each other for score, milestone rewards, and maybe some Clan Wars-exclusive cosmetics.

Deke: Personally I’m looking forward to seeing what we can do to open up the sharing of cards between Clan members. Systems like Donations and Trading offer a great level of focus to your deck building and collecting. Obviously these systems need to consider the wider game economy but they offer a great reason to be part of an active Clan.

That’s enough from us! What are you excited about seeing come to Clans in the future? Why not tell us in the comments, or talk about it on social media? Maybe you want to chat about it amongst yourselves in your very own Clans? Well you’ll be able to do that later today. That’s right.