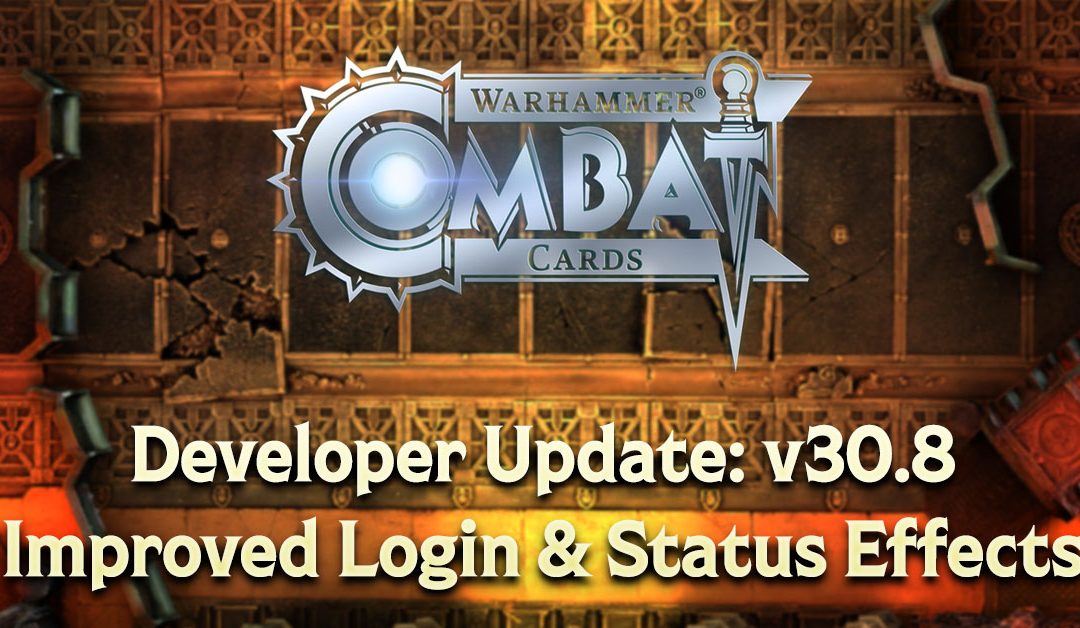 Hey everyone! Version 30.8 is now live and should be available to download (though as always, sometimes it can take a little while for updates to appear on app stores so keep a look out!) and brings a few changes to Combat Cards that will improve some of the early game flow for new and returning players, and to improve readability of what’s going on in games. Let’s get to the juicy details!

It’s been a long and arduous journey getting account linking to function correctly, with numerous hiccups thwarting our previous attempts. We’re very happy, however, with the system it has led us to for a number of reasons. Those of you who are new to the game or those few who might need to reinstall will notice that you’re now greeted with a simple login screen when you first boot up the game. This is great for a couple of reasons. For new users it allows you to either continue on as a new user and start the tutorial without signing in (though of course you can do this later to save your progress in case you change devices or run in to any issues) or you can sign in right away and link your account from the start.

For returning users, previously you would have needed to play through the first battle upon returning to the game. As fun as beating up Gloguthrox can be, this process was not only needlessly time-consuming but also created what would effectively be a ‘dead’ account that you would soon abandon once you had the option to reclaim your old account. This new login screen allows you to bypass that whole process by signing in to your platform’s service, which will find your account (and offer a choice if there are more than one available to you) and allow you to resume your progress.

We’re really happy with this new process, and while there’s one or two minor improvements we want to make to the system already (one of which is listed in the known issues below) we think this is a great change that should reduce some friction.

Forgotten how many times your Shielded card has been hit? Not sure where that Inspiring Presence buff is coming from? Well worry no longer! We have improved the full screen card display to include any active status effects that your card might be experiencing or causing!

We explored options such as including icons on the cards themselves, though this quickly led to a very busy screen that obscured much of the card. By including this information on the full screen card display it should allow you to better keep track of the effects of various traits, while allowing us plenty of real estate to adequately display more and more trait effects (trust us, we have quite a few more planned) while also meaning we can account for different languages in a simple way.

While in this view you can see the timer icon which tells you how many turns a trait will remain active for, as well as being able to tap on the icon itself to get an accurate description of what that status effect is having on the target card. We very much hope you find this screen useful when planning your next attack or which card to deploy.

We recently made some changes to traits and special rules, as well as some balance changes to cards. These can be found on a previous blog post from Harry (or ‘MadEmp’ to his friends) talking about End of Season 8 Balance Changes.

Now on to what’s coming up soon!

Recently we took a look at the Aeldari faction, introducing two brand new Warlords in the shape of Eldrad Ulthran and Urien Rakarth, introducing two new play styles for this faction along with new special rules and traits. We’ve found that focusing on a particular faction at one time allowed us to really hone in on what works and what doesn’t. To that end, we’ll soon be intr☿ducing the next faction we’re taking a look at expanding. Can you guess what it is? There might have even been a subtle hint just now…

The team are still hard at work on other features (including ‘That which shall not be named’) which we’re looking to bring to you all over the next few months. For those we’ll bring a more focused article to go into more detail when the time is right, but in the meantime let’s take a look at some of the fixed bugs and known issues:

That about wraps it up for this update. We hope you all enjoy the new features and look forward to bringing you details on two pretty massive things coming very soon.