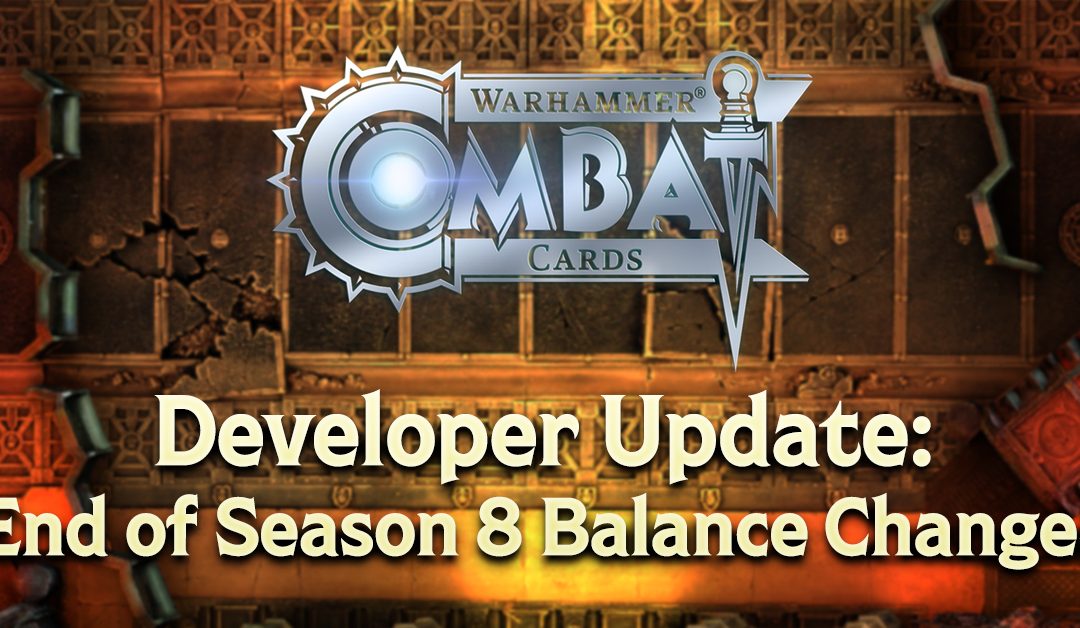 With the end of the current season comes the next balance changes. We have some hotly debated changes coming up for: Fear, Poison and the Cannoness. Along with the usual adjustments to some of the highest and lowest performing bodyguards, as well as a slight buff to Psychic Link. So, without any further preamble, let’s dive straight into the traits!

“While this card is on the battlefield the enemy card opposite has Fear, reducing their attack stats by 20/40/60%.”

Quite a big change, and one that we think will be an improvement for a few reasons:

It helps different cards in different ways and gives a more specific role than just ‘fear caster’. The general role of ‘fear caster’ meant that cheaper cards benefited more from the trait previously. In this new instance, smaller cards can benefit by becoming much more potent lane blockers against cards that would have previously killed them in one or two shots, or more effective at dueling other low cost cards. On the other end, high damage cards with fear benefit from having an extra layer of protection to continue to deal more damage.

This should add a new layer to the role and strategy of Fear cards while still being beneficial to all cards with it.

“When this card is deployed it gains Poison. Unpoisoned cards attacked by this card are Poisoned, losing 3/6/9 Wounds at the end of each player’s turn.”

This feels like a much better representation of what poison should do, and solves the issue of potentially wasted poison on an empty lane or cards with health low enough that the Poison makes no difference.

Poison and attrition decks will get a nice boost with this change and it adds the tactical nuance of being able to move cards around the lanes to maximise the spread of poison. It also poses a counter chance for playing against poison as a card is only poisoned when attacked, so if you are able to eliminate a poison card before it deals damage you will not be poisoned. We feel this will add some more strategy into both ends of the poison effect.

The reasoning behind this change is that while psychic link is a strong ability, it was very much restrictive in the sense that to get a meaningful boost you had to realistically have two supporting psykers. This led to quite limited deck build options, and as such reduced its usefulness. By increasing the percentage, having a single supporting psyker is viable for a good boost, while maxing out on psychic link is suitably rewarded given how restrictive, or potentially difficult, achieving that build is.

Spirit of the Martyr: Bonus attack value changing from 100% to 75%.

The reason behind this change, while influenced by community feedback, is based on the data. The Canoness has the highest win-rate of any warlord this season and significantly outperforms both other SoE warlords in both win-rate and pick-rate. As well as her top win-rate her usage rate has also been trending upwards across the last three seasons, and any position where a card is starting to become dominant is one that needs addressing. Her warlord rule is clearly the reason for this and since the changes to Badrukk her free attack damage output is noticeably higher.

Here is the full list of cards receiving changes this season, in faction order:

Tzax’lan-tar – Lord of Change of Tzeentch:

A final small note to say keep an eye for an upcoming post on the latest build and patch where we will be looking to add some cool new features!