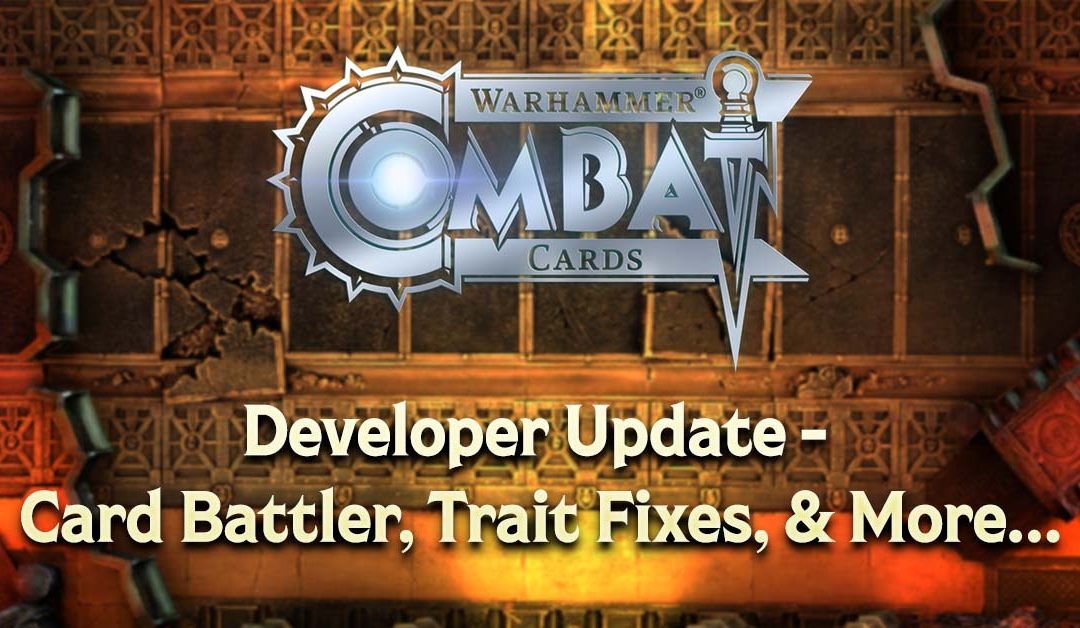 Today we will be launching our new ‘card battler’ system! The team has been hard at work developing a new backend system that will allow us to inject more creativity into the game through new traits, Warlord special rules, changes to the gameplay, and more.

The first change you will see is to traits and how they behave. The biggest change you’ll see is that traits now affect other traits. This is a big change to the current trait behaviour and one that we felt adds a different dynamic while curtailing some of the duration of more defensive traits.

One more change this system brings is the timing of special rules. You may notice now that special rules take effect when the trigger condition has been met. A great example is The Corpse Lord’s ‘Repair Protocols’ special rule. Any card that Readies will now have the +10 Wounds applied immediately, rather than at the end of the turn. In practice it doesn’t change much, but it does mean the special rule is communicated better as this has confused some players previously.

This new system has allowed us to address some long-standing issues with traits and special rules, and we’re happy to say the following issues have now been resolved:

Iron Halo:
– Deploying Captain Acheran now counts as a Space Marine for the   purposes of this rule.

Psychic Discipline:
– Deploying Grand Master Voldus now counts as a Space Marine for the  purposes of this rule.

Suffer Not The Alien To Live:
– Deploying Watch Captain Artemis now counts as a Space Marine for the  purposes of this rule.

Tactical Precision:
– Deploying Brother-Lieutenant Tolmeron now counts as a Space Marine for  the purposes of this rule.

Mark of Chaos Ascendant:
– Abaddon’s ability now successfully triggers when he attacks and not just when he causes damage. No more being thwarted by those pesky shields!

Bolt of Change:
– Ahriman’s ability now successfully triggers when he attacks and not just when he causes damage. Take that, shielded cowards!

Disgustingly Resilient:
– Gloguthrox’s ability now successfully triggers when he attacks and not just when he causes damage. Shields won’t save you now!

We were going to wait until the balance pass to look at altering trait values, but we felt that Medicae has been in a pretty bad spot for a while and wanted to take some initial steps to address it. We’ve decided to change the trait from using a flat value to a percentage*, which should help balancing the trait in both the early and late game. We’ll be keeping an eye on the values ahead of the balance pass and make any tweaks we feel are appropriate.

As well as being able to fix traits, this new system allows us to experiment and change how the game itself plays. We have some interesting tests going on internally, but we wanted to try some of these initial features we liked and get player feedback. As such there will be some changes to the next campaign after ‘Lileath’s Despair’. We will be trialling the following:

We look forward to hearing your thoughts on the changes. We feel they add a more traditional CCG element to the game flow, and would look to include these in other game modes in future if they prove popular. We’ll be posting a dedicated thread in the forums, which we encourage you to use, and monitoring other social channels for feedback. We’re looking forward to hearing what you think.

However, that’s not the only other thing coming with the next Campaign…

As well as all of that, we’re in the midst of a balance pass for existing cards. We know you’ve been patiently waiting for changes to certain cards and we’re keen to get this next iteration out to you all. We’ll have more news on this in the not too distant future.

We’ll have news on other upcoming features in another post this week, so keep an eye out for that!

*The value may still display as a flat number until a new update is available later this week.