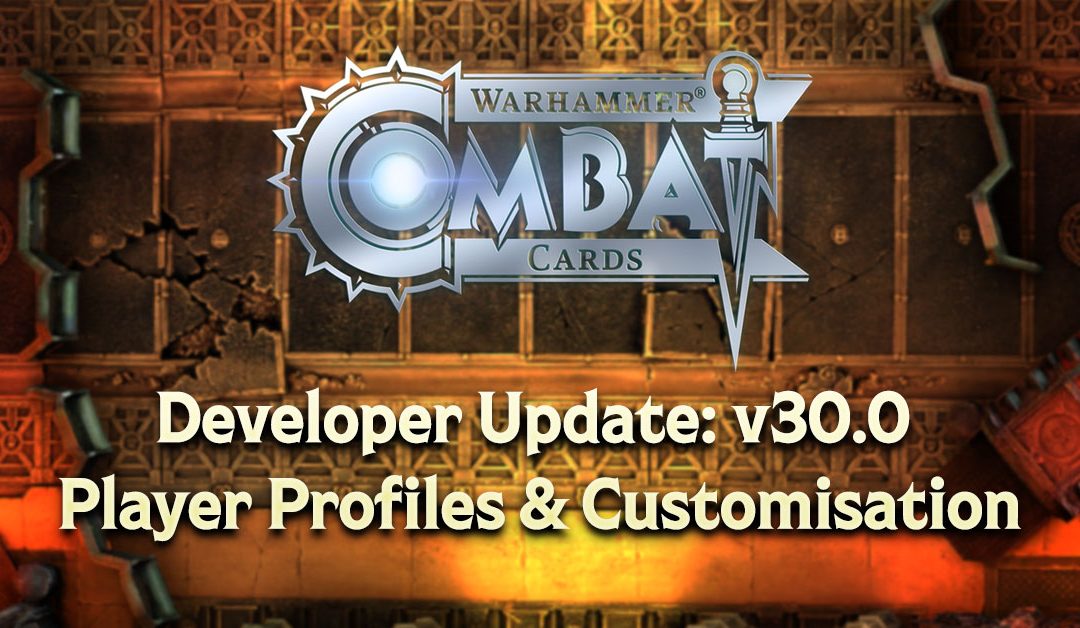 Welcome to another Developer Update! Version 30.0 should be appearing in an app store near you very soon, and we’re excited about the new feature it brings, and what it means for the future.

Player Profiles are a new feature to Combat Cards, giving you all sorts of information about you and your progress in the game. In this release, the profile gives you information such as your total wins, number of cards discovered, and even your favourite Warlord! In future updates we’ll be including more stats including recent decks, Ranked mode stats and more. Player Profiles will also become even more useful when Clans are introduced as you’ll be able to see your clan mate’s progress and invite people to your clan!

Player Profiles are full of useful information about you, but what if you want to show off the faction you love to other players? Well now you can with Customisation!

Recently we changed the way your name is displayed on your front screen and in battles, and the reason for this was to pave the way for Customisation, which will allow you to change the appearance of what we call the ‘Name Plate’ with a number of different features. To start with, you’ll earn a new Avatar with every Warlord that you unlock, so you can change yours from the Combat Cards logo to your favourite faction’s champion! You’ll also earn a new Title as you progress through the ranks, starting from an Aspirant all the way up to Captain.

As you can see from the concept art above, there are other Avatars, Titles, and other cosmetic items like Banners and Borders that will be arriving in the game in due time. These will be available from a number of activities in future, and can be seen by other players during battles! There are other cosmetic item categories that we’re planning to release at a later date that we’re very excited about, but more on those in a future update.

The team are hard at work on a number of requested features (some of which might have been hinted at earlier. Did you miss it?) but the one we’re testing currently is the improved battle system that we have mentioned in previous updates. Not only does this open up a number of exciting opportunities for new gameplay, but it also gives us the ability to fix the various issues with Traits and Special Rules that you will have undoubtedly experienced before. It will also allow us to introduce more varied Traits and Special Rules, and of course you can’t have new Special Rules without new Warlords, right? More on this soon…

We’re also in the process of going through another balance pass on cards, so should have a separate update on this once the changes have been confirmed.

Finally, don’t forget that April 29th signals the start of our Exultation event; a celebration of all things Combat Cards! This includes a whole week of: