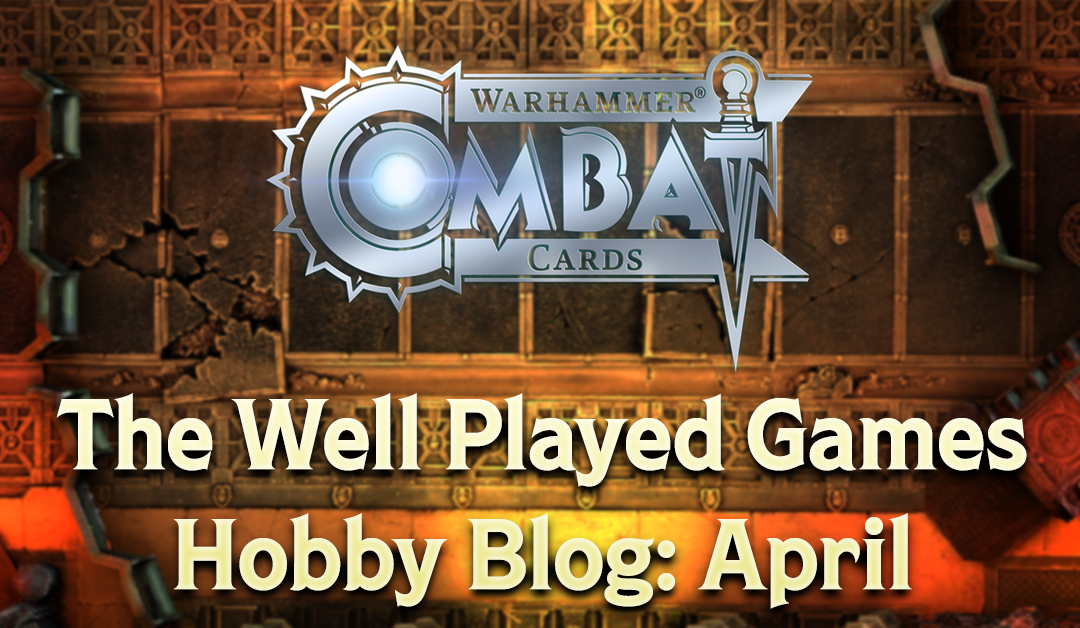 Welcome to the another instalment of the Well Played Games Warhammer Hobby Blog! This last month has been an interesting one with self-isolation giving us all a bit more spare time to get some hobby done, so let’s dive in and see what the team have been doing.

I’ve been using the time at home to try and finish several projects, including my Iron Warriors, an Aeldari force (more on them in a future blog) and various other armies that were almost complete before something new and shiny attracted my attention.

The first image is all 50 of my Iron Warrior Cultists, which is a real mish-mash of figures going from the Rogue Trader era up to Blackstone Fortress.

Second is my work in progress on my Iron Warrior Dark Apostle, who’s pretty much scratch built from a range of Chaos Marine and Age of Sigmar bits, plus his two Acolyte ‘helpers’.

Finally, I thought I’d show the work in progress on my Noise Marine, who I’m loving painting as he lets me use colours my normal grimy style has no use for.

I’ll show the finished versions of these guys next time, plus the Possessed and Lord Discordant I’ve just basecoated.

A mixed bag of projects for me this month. Apparently I can’t decide what I want to work on! One of my larger projects has been building and painting the scenery for my Necromunda table. So far I’ve managed to create the layout for a 3′ x 3′ table using the Zone Mortalis kits and floor tiles, and it looks great so far! It’s a huge project and I’m looking forward to getting to the finer details to really add some life to the board.

After finishing up some of the Necrons from last month, I’ve decided to switch gears and build something a little larger: Imperial Knights! I picked up a few of the models back when the Castellan was released and somehow haven’t managed to even build them yet, so I’ve decided on a list and am steadily putting it all together. I may be setting myself up for a rather ridiculous challenge over the upcoming Bank Holiday weekend, but we’ll have to wait until next month to see the results…

I’ve been continuing with The Golden-Oily boys (Custodes) during the isolation we’re all in.  It’s been pretty good going.  I didn’t have much in the way of troop choices, and with Custodes being difficult to kill, I decided to bulk my guard with shield count to 5. Recently, the Sagittarum Guard have been updated to troops, so I also finished 5 of those.  They are the best offering Custodes has for shooting.

In addition, my 3 Vertus Praetors were doing pretty well in games, so I picked up another box when Combat Cards was at Warhammer World for an event.  One of the bikes has been turned into a Shield Captain, giving me a much needed HQ.    The bikes have been magnetized as I was struggling to transport them, which was super fiddly but really helps.  I also took one of the guard models and turned him into a slightly kitbashed Shield Captain, which was really fun to do.  The army is starting to get to a good size now, although I’ve still got a couple of things still to go, starting with some Allarus in terminator armour

Unfortunately it appears Dave has become one with the Hive Mind, providing only images of his growing swarm accompanied by indecipherable screeches and the sound of chitinous hooves!

That’s all from the last month. We’d love to see what hobby activities you’ve all been up to! Why not show us or tell us in the comments?