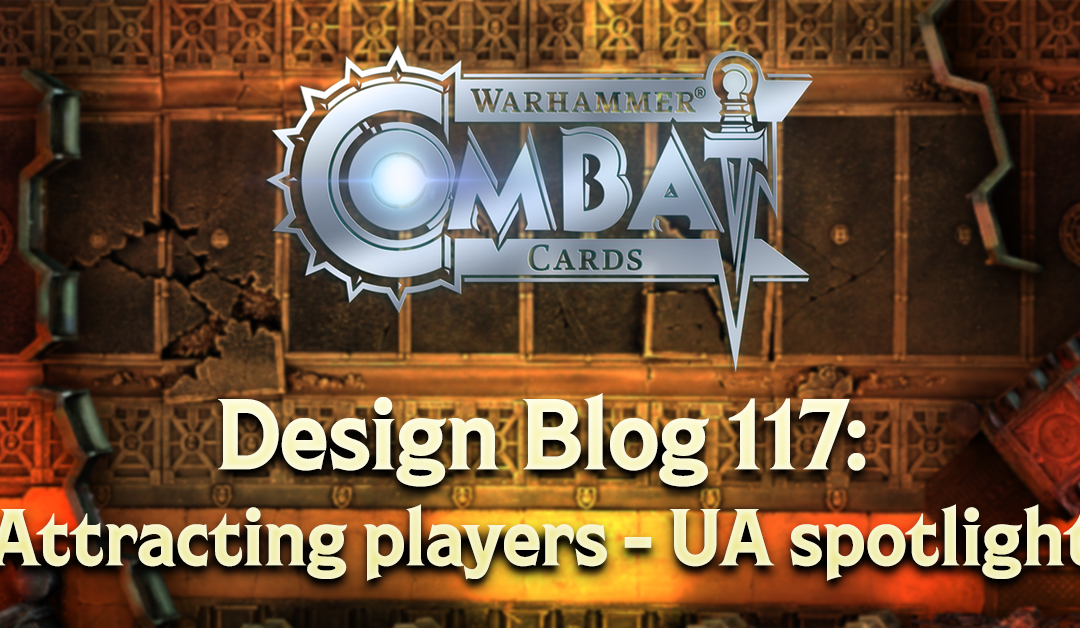 A few weeks ago we ran a spotlight on how our artists work on the concepts for new traits, so this week we have another spotlight, this time on ‘User Acquisition’. No idea what UA means or why it’s so important to a game like Combat Cards? Here’s Justin to explain:

I’m Justin, and I do performance marketing for Warhammer Combat Cards. I’ve played video games since 1989 and had the good fortune to get into the games industry in 2002.

Even though I’m the right age bracket, I never got into Warhammer as a teenager. Mostly because I’m not good at any form of artistic handcraft and perceived the hobby to be all about painting. Only when I had the prospect of joining the Combat Cards team back in 2018 I looked at the other aspects of Warhammer and got completely immersed in Warhammer 40,000 lore.

Can you give a player focused explanation of what UA means?

Simplified, a healthy online game requires two things: active development of content and features, as well as an active community of players.

Playing games like Warhammer Combat Cards is most fun when sharing the experience with thousands of like-minded people.

In that context, ‘User Acquisition’ has the role to first bring in enough players at launch in order to have the critical mass a community can develop in, and second to establish a steady stream of new players so that the community stays fresh and can grow.

How do you actually ‘do’ UA?

Facebook and Google Ads are our two most important performance marketing channels, as they are for a majority of other online game companies.

The three most important inputs in these channels are:

Targeting used to be a lot about defining your potential player base through things like explicit interests. The most obvious example in this case: there are around 10 million people worldwide who Facebook categorises as interested in Warhammer. We can tell Facebook to deliver our ads to these people. Paired with socio-demographics and geo targeting, this delivered reasonable results.

But over the last 5 years, algorithmic targeting has become absolutely dominant. These days, we mostly tell Facebook and Google which of the players we acquired actually liked our game, and they will then autonomously target more people with similar properties like those.

In this algorithmic world of performance marketing, what you show to your potential audience has become the largest success factor. The texts, videos, images etc. that you see as ads for example in your Facebook newsfeed we call creatives.

Most people give an ad a few seconds – at best – to decide if they’re interested in the advertised product. Our challenge is to find a healthy balance between grabbing a potential player’s attention and promising only what we can actually deliver on.

Warhammer Combat Cards is a great way for fans to engage with 40K while they don’t have a tabletop battle going on or when they’ve painted all their miniatures (editor’s note – I’m pretty sure a player actually managing to do this would cause the universe to end or something).

But it’s also a tool to bring new people into the hobby. 70-75% of our players had engaged with 40K at some point before Warhammer Combat Cards, the remaining 25-30% are new to 40K.

What many of our creatives try to convey is the atmosphere or feeling of the game more than any specific feature. The characters on our cards and campaign artwork feature the very distinct art style of 40K and evoke feelings of epicness. Next to the hundreds of painted miniatures, the game team have included lot of little details like the back-of-the-card lore or that all of the objectives use language from the tabletop, so we feel that Warhammer Combat Cards really delivers on the atmosphere of 40K.

Can you show an advert that performed particularly well? Any theories on why it did well?

This is one of the best performing video creatives since we launched the game – even though it kind of violates a cardinal rule. Because everybody’s attention span on social media has shrunk to few seconds, the first 3 seconds are supposed to grab the attention. This video starts with a couple seconds of text. I guess it was the right kind of text that foreshadows the atmosphere of 40K well.

It’s surprises like this why, for UA creatives, continuous testing is really important.

Thanks for taking the time to give us that insight, Justin. When people think of the games industry they normally only consider programmers, artists and designers, but of course the modern industry is full of ‘hidden’ roles that are just as vital to the long-term success of a live game like Combat Cards.

I hope to provide more spotlight posts in the future, but in the meantime you can get in touch by leaving a comment below, through our Facebook page or by mailing [email protected]. Also, if you’d like to follow our posts through RSS you can use this link:  https://www.combatcards.com/feed/