We add a new Warlord to each faction every six months, and as the next ‘Warlord month’ is approaching our preparations are underway. Warlords take longer to add to the game, as each has a unique special rule, and we need to prepare those ahead of releasing the cards (for more on special rules, see here).

This and next week’s posts will explore how we select character X to be a new Warlord over character Y, and covering the subject was triggered by us recently adding Marneus Calgar to the game. Facebook reader Lachlan Graham asked why Marneus was released as a bodyguard, not a Warlord, because if the Chapter Master of the Ultramarines – one of the greatest strategic minds of the 41st millennium – doesn’t make the cut then what are the criteria? 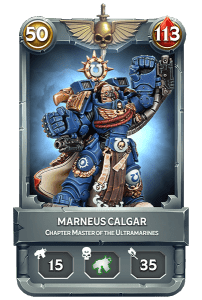 The newly added Marneus Calgar is still a powerful card, even as a bodyguard!

To sum up two weeks of posts in a single sentence, we select Warlords based on each one adding new play options for their faction.

There are two main ways a new Warlord can do this, which we’ll explore each, but fundamentally, using this criteria immediately means many potential ‘HQ’ choices from each faction stop being viable Warlords.

And it’s for this reason we made Marneus Calgar a bodyguard, rather than a Warlord. To break Marneus down: He would be hard hitting (with a leaning towards melee attacks), and have a pretty high Wounds stat, altogether giving him quite a high points cost. But we already have a Space Marine Warlord who fits exactly that description in Grand Master Voldus. And when we looked at potential Warlord special rules to give to Marneus, we thought that the passive boosts he gives to friendly Space Marines would feel too similar to Brother-Lieutenant Tolmeron’s rule.

As a result we decided to make Marneus a bodyguard and have the next Space Marine Warlord a little more… ‘out there’. Hint: Think giant angry metal box covered in furs.

So now we know why Marneus was made a bodyguard, let’s look at the two ways each new Warlord can add to the player’s play options.

The first reason we might include a particular Warlord is because they open new deck building strategies for their faction. They tend to do this through their special rule, most of which have been designed to provide bigger benefits if you take cards from the Warlord’s faction.

For example, each of the T’au Warlords heals and buffs the final T’au cards you deploy from your deck, but Shadowsun boosts ranged cards, and Farsight boosts melee ones. Therefore, each Warlord suggests decks you can build, while leaving the ‘best’ cards to select up to you (depending on your available points, the cards in your collection, whether cards are upgraded, etc.).

Another example are the Tyranid Warlords. Each one has a special rule that triggers every turn, so they want the battle to last as long as possible, but Ghosar decks heavily favour melee, while the Hive Tyrant’s rule suits all attack types equally, giving you more flexibility.

We’ll look at the second factor Warlords affect, plus how point costs come into this, in next week’s post. In the meantime, if you have any questions or comments you can get in touch below, by mailing [email protected] or through our Facebook page.