This is the fifth and final (for now) look at Warlord special rules (here are parts one, two, three and four). This post covers the final factions, plus notes on the visuals behind the special rules, and how we choose new Warlords.

Fueled by an unshakable faith in the Emperor, the Imperial war machine grinds its foes beneath sheer weight of troops, knowing that sacrifice is the only route to victory.

As a result, the Servants of the Emperor Warlord special rules all revolve around the death of your own cards – after all, there are always more troops to follow!

But while it might be tempting to get the most out of this by simply filling your deck with cheap cards, you need to ensure you’re actually getting value from the Warlord’s special rule triggering.

One of the Servants of the Emperor faction’s strengths is the sheer range of cards it can choose from (you can read more about that here), so there are a lot of ways you can make use of each Warlord’s special rule. Plus there are some cards, such as the Adeptus Custodes, who are useful in either of the Warlord’s decks, as they have both the Wounds and melee attack to make use of the special rule’s bonus.

I’ve talked about why we include Warlord special rules in blog posts before, but hopefully this series of tactic posts have given you some new ideas on how to build decks around each Warlord.

Plus these posts might have helped clarify any confusion over where some of the card buffs you see happening are coming from (we’re aware that we need to add more feedback for special rules triggering – it’s on ‘the list’ with all the other improvements we want to make over the next few months!).

We’re also aware that there are several bugs with Warlord special rules right now – causing them to affect incorrect cards, for example. These issues are being fixed as a priority, because we understand how annoying it is when a bug causes you to lose a battle you should have won. 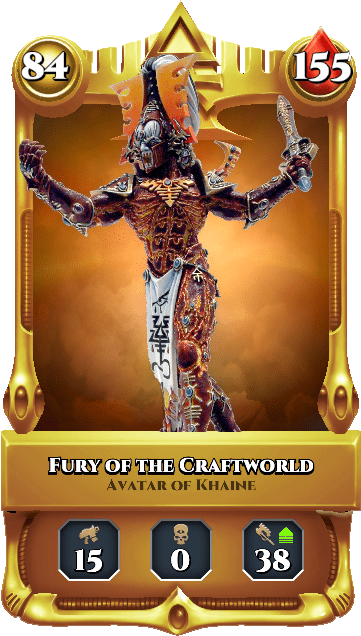 Aside from improving and fixing Warlord special rules, as I mentioned right at the beginning of part one, we’re planning to add a new Warlord to each faction soon, and will continue to do this over time.

You might wonder how we select which cards to make Warlords – while leaving other, just as valid cards as bodyguards – but basically each Warlord is chosen to add something new to your choice of how their faction plays. So, rather than repeating what one of that faction’s Warlords already does, we try to add new deck building options, so you can keep your opponents guessing.

With all the factions covered, hopefully any questions about a particular Warlord’s special rule has been answered, and you’ve got some new ideas about decks to create.

Although some of the special rules can seem quite low key, there are some particularly nasty combo’s which you can create, helping to win battles which seem impossible. This is particularly true in Campaign battles, where clever use of your Warlord’s special rule can allow you to beat AI decks which ordinarily would be way too powerful.

Thanks for reading. If you have any questions, comments or suggestions for new Warlords, you can get in touch through [email protected] or via our Facebook page.