Welcome to the second in our look at Warlord special rules (if you missed the first part you can find it here, along with an explanation of how special rules work). 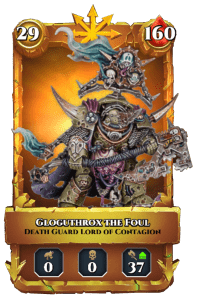 Though their reasons may differ, every follower of Chaos seeks power, battling for glory under the gaze of dark and fickle gods.

We represent this by having Chaos Warlord special rules exclusively revolve around the actions of that Warlord. This means their special rules benefit the rest of your cards, but only when your Warlord is actually on the battlefield and fighting.

As discussed in the Chaos faction focus, this means Chaos decks need planning to use well, with your cards divided into two roles:

Switching to game development mode for a moment, this need for the Warlord to be on the battlefield and fighting to use their special rule makes Chaos Warlords one of the more difficult factions for us to balance.

We need their rule to be powerful enough to make them worth using, but not so overpowered they’re an easy win. Therefore, you should expect the numbers behind the Chaos Warlord special rules to change over time, until we settle on a good balance. 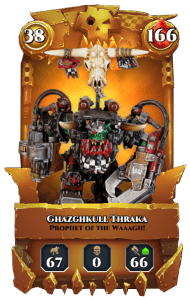 Powered by an unstoppable urge to kill and destroy, Orks grow larger and more powerful as they slay foes and dominate the Boyz around them. We represent this by triggering Ork Warlord’s special rule whenever one of your Ork cards destroys an enemy card.

The results of the special rule triggering depend on your Warlord, meaning it’s a good idea to build your deck around them.

With these special rules rewarding you for enemy cards being destroyed, you need to work out which cards you can wipe out, and which you’re just going to ‘shut down’ by blocking them with high Wound cards.

Picking on weak cards will get you the most uses of your special rule, so it can be worth taking the time to check where to best deploy new cards – particularly when you’re deploying cards which have traits which get them free hits.

Thanks for reading, and hopefully you’re finding these guides useful. Feel free to get in touch if any of the special rules are still confusing or you have questions – also, if you have any tactical advice that I haven’t mentioned. You can get in touch through [email protected] or via our Facebook page.