Hi, and welcome to the second part of how new cards are added to Combat Cards. Although interrupted by last week’s post on the Rank changes, the first part of this post talked about why we add new cards, so this time let’s go through HOW it’s done. 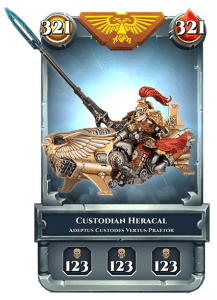 Work in progress (note the non-final stats) example of an upcoming Servants of the Emperor card.

First, once we’ve decided on a gap in a particular faction we look for potential miniatures to fill it. For example, the Servants of the Emperor faction is tending towards slow, ranged attack cards, so we’ll add a fast, melee focused card. An obvious fit is a Custodes Venator.

Next we source the miniature artwork, looking through Warhammer 40,000 publications to find a suitable image of it. This tends to mean we need images where the character is facing the camera (for ‘tall’ miniatures) or around 45 degrees off that (for ‘wide’ miniatures).

Once we’ve been sent the high-res image of the miniature by Games Workshop, the work splits into two streams – design and art.

As you’d expect, we don’t simply take the picture of the miniature and slap it into a card border – there are a lot of steps our artists go through:

Meanwhile, design is providing the following:

When everything’s ready we send the new card to Games Workshop for feedback, make any changes needed, and then we have another card ready to go into the game.

To wrap this subject up, I thought it would be interesting to show you guys some of the decisions we have to make when thinking about which cards to add. If you have an opinion on any of this, feel free to let us know.

There’s no right or wrong answers to these questions – the opinions and playing habits of our audience will dictate which way we go!

I hope you found that interesting, and have an idea of why and how we add new cards to the game. If there’s a favourite or classic miniature you think we should include, please do let us know. You can get in touch via [email protected] or through the Combat Cards Facebook page.