First up, lets make sure we all know what traits are. 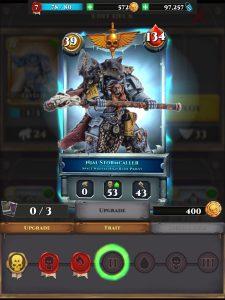 Example of a legendary card with its trait already unlocked (and the next time this card is upgraded its trait will increase in power).

Every Combat Card has a single trait, which they gain when they’ve been upgraded enough times, and that trait improves as the card keeps being upgraded (you can tell how upgraded a trait is by the number of stars it has on its’ icon).

You can check out each card’s trait on their upgrade path, and you’ll notice that when you gain a legendary card, they begin with their trait already active.

Unlike Warlord special rules (more on those in a later blog post) which are always active, traits only trigger once per battle.

While you’re deploying cards to the battlefield, any card that you or your opponent has with a trait will show an icon for that trait. Those traits will all go off when you’ve finished deploying, and the icons will disappear (because they don’t matter anymore – the traits have already done their thing).

Just as tapping a Warlord’s portrait in the corner of the battle shows you their special rule, tapping a trait’s icon will tell you what it’s about to do.

The process above means that traits can be ‘direct targeted’ – as in you can choose where to deploy your cards to try and mitigate your opponents’ traits and to use yours most effectively.

For example, the Shielded trait blocks the next hit a card takes, so a card with that trait can be used to shut down a powerful enemy for a turn (hopefully giving you time to destroy them or take out the Warlord). There’s no point deploying a card with this trait opposite a weak enemy.

Note that because all traits go off after cards have been deployed, you can’t get two of them to hit the same enemy card. Deploying the second card to the same slot will push the first card aside, meaning its trait will affect a different enemy.

Here are the first six traits we have in the game (note that the stats for each trait are very likely to change as we adjust and balance them): 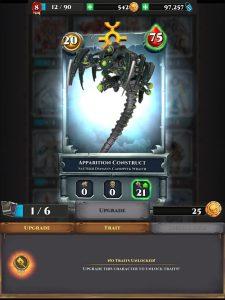 For example, when upgraded enough to unlock its Furious Charge trait, the Canoptek Wraith’s free attack will inflict 25% of 21 = 6 damage.

These three traits all follow the same design – when the card is deployed it makes a free attack against the card opposite it. That attack uses either this cards’ melee / psychic / ranged stat, depending on the trait.

This trait means that the first hit this card takes (whether a melee, ranged, or psychic hit) is ignored, and inflicts no damage.

As this trait is upgraded it ignores the first two and then three hits the card takes, making it great for blocking your opponent’s most powerful cards.

When a card with this trait is deployed it immediately heals all your deployed cards by 5 Wounds. Upgrading this trait increases that to 10 and then 15 Wounds.

Normally cards attack the card opposite them, or the centre card if their ‘slot’ is empty. However, when a card with this trait is deployed, all enemy cards must attack it with their next attack. The card with this trait suffers only 90% of the damage they should take from those attacks.

Upgrading this trait means all enemy cards must attack this card for two and then three rounds, but this card only suffers 80% and then 70% of the damage from those attacks.

Obviously this trait is extremely useful, as it allows you to protect your vulnerable cards by having all attacks focused on this one. Used at the right time, it can totally disrupt your opponent’s plans, but means the card with Distract is going to take a lot of damage.

The list above is just the first wave of traits in the game – we plan to add a lot more over time.

This means that currently all cards have one of these six traits, but as we update the game some cards will swap to newly added traits (which may alter those cards’ points costs, if their new trait is more / less powerful than their old one).

We realise that changing cards’ traits like this is disruptive, so why are we adding them over time instead of all at once? There are a couple of reasons:

Thanks for reading, and I hope that wasn’t too dry. I’ll be posting more blog entries on traits as we add them to the game – they add a fun layer of extra tactics for advanced players, and we have a long list of ideas for them!