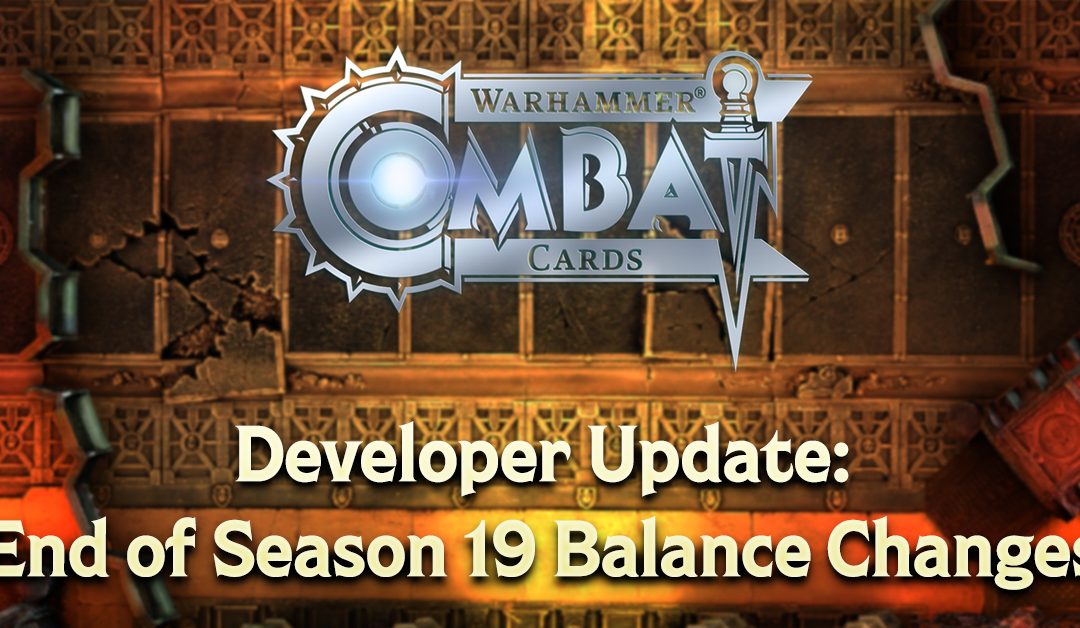 This month’s balance change has a smaller number of Bodyguard changes after last season’s larger changes. Overall it’s looking pretty positive across the board with very few cards falling into a clear category of low win and pick rate.

That said we have a few trait changes and a few warlord changes, meaning we’ve still got plenty to talk about!

First things first let’s look at the biggest change. For those of you who watched the Livestream last week this will be no surprise that Captain Acheran is getting a reworked rule. The reason this has taken slightly longer is due to his role as the starting Warlord. It is important to have a rule which is beginner friendly, while also proving a useful and interesting rule for the more experienced players. Hopefully we’ve achieved that with this new rule:

Old Rule: [Iron Halo] When you deploy a Space Marine card, this Warlord (whether deployed or not) gains +15 wounds.

New Rule: [Iron Halo] The first time a friendly Space Marine card would be destroyed, it instead has 15 wounds remaining.

Important thing to note here is the use of the word ‘would’. When this rule triggers the card does not die, as such and rules that trigger on death (e.g. Deathblow, Da Rippa [Kaptain Badrukk], Battle Focus [Zephyrblade]) will not be activated by Acheran’s new rule.

Also worth noting is this applies to all Space Marine cards in the deck, so will trigger once per card, including Captain Acheran himself.

Gloguthrox has had a higher success rate since his rule change, however he is still one of the lower Warlords on average. Given that it has been a fair few months since this change was made, it makes sense to increase the effectiveness of his rule slightly. By increasing the value of the debuff, horde decks become more powerful, whilst also allowing smaller decks to be more viable as well.

Greyfax has dominated the field since her release and while her win rate is relatively close to the other top warlords she has been the highest performing Warlord since her release in February each Season. By increasing her points to 40 we’ve tackled this in two ways; reducing deck points available obviously affects her special rule and adds a bit more restriction on builds available. It also puts her into Big Game Hunter range, giving a few more tools to tackle her huge health pool after her rule trigger.

That rounds off the Warlord changes, so let’s look at the two Trait changes we have:

The balance between the Area of Effect traits is one that has been hard to gauge and the topic of much debate in the community. By making the damage of the trait correlate to the frequency with which the traits trigger each trait should feel significantly different. This should add a clear identity and balance between the three. While nerfing Psionic blast was also an option, this current option felt better as the first initial step. While there is of course the option to adjust further down the line, we will likely let this settle for a few seasons to see the effect over a longer period of time.

With that we’ve covered this Season’s rule changes, and now have the bodyguard changes to go over.

Stat Change: +19 Base Range, -19 Base Melee
(This is an instance of the attack stats being released swapped and are now being reverted)

And that rounds off the changes for this season. While a bit lower on the Bodyguard changes as said earlier, the rule changes should offer some more options, and some different deck building opportunities.