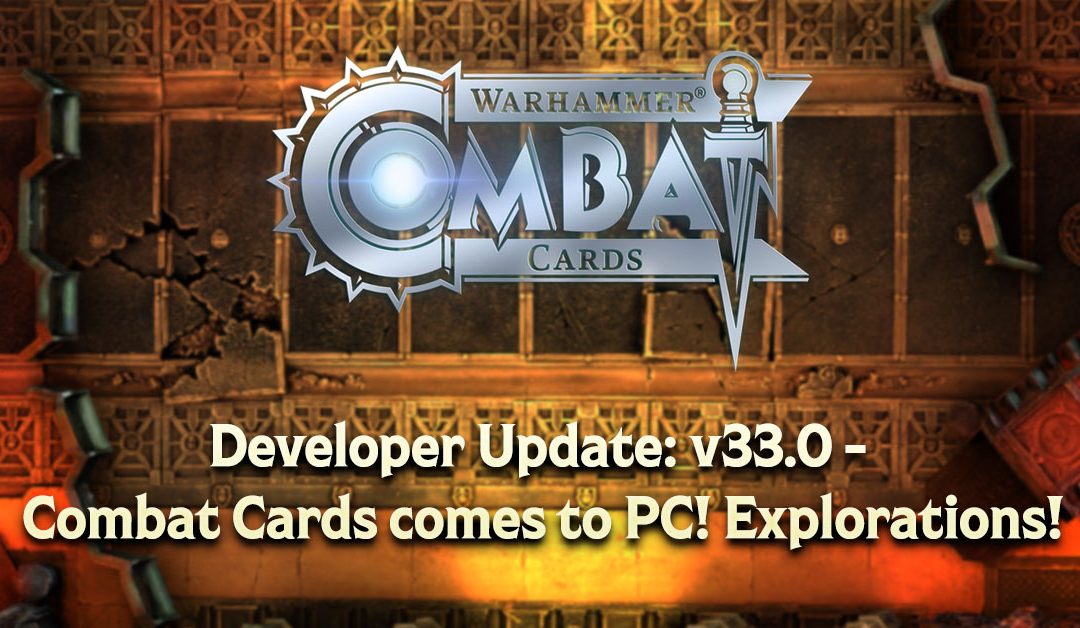 Version 33.0 will be appearing in app stores later today. We recommend updating as soon as it’s available as it contains some important features for our participation in Games Workshop’s upcoming event.

Games Workshop recently announced their upcoming Warhammer Skulls event, a celebration of all things digital in the world of Warhammer, and we’re proud to announce that Combat Cards is taking part this year! As such you might notice the game has a slightly more red and brass feel than you’re normally used to, but don’t despair. More details can be found about the event here and we’ll be announcing all of the things coming to Combat Cards for the Skulls event soon. What we can tell you though is that as part of this event we will be launching Warhammer Combat Cards on Steam and the Microsoft Store! The team have been hard at work ensuring the same great experience is had on both mobile and PC and we’ll be bringing many more updates to both platform in the near future.

We’re sure you’ll have some questions so we’ve put together a small FAQ that should hopefully cover anything you might want to know.

When is Combat Cards launching on Steam/Microsoft Store?
We aim to release Warhammer Combat Cards on the Microsoft Store at 12:00 BST on June 3rd 2021. Please note the Steam version of the game will launch at 16:00 BST at the earliest due to timezone restrictions.

Can I use my existing Warhammer Combat Cards account on PC?
If you have an existing account for Warhammer Combat Card you can share your progress between the PC and mobile versions of the game. Unfortunately the game will not be launching with cross-platform login (though we will look to add this in a future update) but it is possible to share your account across multiple platforms by contacting Customer Support from your PC version. Be sure to include details such as the Player ID and name of your account on mobile as well as any other useful information (such as current coin and plasma balances) to assist the team in finding your account as quickly as possible.

To open a ticket, go to your Settings menu and select ‘Help & Game Guide’. From here you can create a new ticket and include the relevant information to aid in getting your account shared with your new platform as soon as possible.

Will there be cross platform play?
Yes! Players who play on PC and mobile will be able to play against each other and even join the same Clan regardless of your platform of choice.

Will any features from the PC version be coming to mobile and vice versa?
Any feature (game modes, new cards, etc.) that we release on mobile will be present on the PC version of the game and vice versa. Other changes, such as layout, will not necessarily be included across both versions as each has differing requirements. If we feel a layout change would benefit both platforms in some way then we would look to implement these where possible.

We hope you enjoy playing Combat Cards on PC whether you’re a bright-eyed new recruit or a seasoned veteran! Alongside the PC release we’re also starting to introduce a new event type in Combat Cards that we have named Explorations.

Explorations are a new event structure for Combat Cards that allow us to create events for people to take part in that don’t have a leaderboard. Instead of competing against other players’ scores like you do in Campaigns, you will instead have a track of rewards for you to progress through at your own pace. Just be sure to complete them all before the event finishes! This new structure presents us with a wealth of options for how we put together new events in the future. Expect some of these to even feature PvP! The details for each event can be found within the event’s own page so you’ll know what structure and modifiers to expect.

Yes, modifiers! Alongside Explorations we will be introducing modifiers that allow us to add even more variety to events going forward. We’ll be introducing two new modifiers for the exclusive Warhammer Skulls event but rest assured that more weird and wonderful things will be arriving in the future to keep you on your toes during your battles. Any active modifiers can be seen on the event page so be sure to check those out before you create your deck! Modifiers will be first used in Explorations but may also make their way to other game modes in the not too distant future.

We hope you’ll join us for a great week of fun during the Warhammer Skulls event starting June 3rd!