As revealed in the last Twitch livestream we will shortly be adding a new feature to the leveling system: Honour Ranks.

For those of you who didn’t catch the live stream, here’s a quick summary:

The current maximum rank is 71, but this will now be increased to 80. Each level gained from 71 to 80 will give out a plasma or coins reward (full details on amounts later). Upon reaching level 80 you will receive the title of Chapter Master, and beyond that, the new Honour Ranks will come into play. Your old numbered rank icon will be replaced with a new Honour Rank icon, and by achieving a set amount of experience you will continue to earn alternating drops of coins and plasma. This is an unlimited feature, so as you continue to earn experience, you will continue to earn currency.

So why did we want to do this?

First of all, we were keen to give something back to some of our longest serving and most committed players. It’s been a long time since we’ve touched the level cap, and a lot of players now have a large amount of banked experience. We wanted to do something with that whilst also providing a goal for the players not yet there.

Second, with there previously being no clear use for experience for max level players, it’s a good way to make objectives meaningful again and inject some challenge and variety back into the game. Making objectives more rewarding should allow top players to stretch themselves a bit more in trying out new builds and strategies.

Thirdly, it’s about giving players more freedom with upgrading cards. By providing players with more coins, and making the experience gained from upgrading cards useful to players, we want to establish a more positive upgrade cycle. Players will now be able to upgrade their cards more freely and be rewarded for doing so.

Overall, I think it’s an important piece of the puzzle that has been missing from the end game and should be a rewarding and engaging feature without drastically changing the core game itself.

Let’s start with the new ranks from 71-80. There’s nothing too drastic here, other than currency being given out when reaching one of these ranks.

The full table for these ranks is as follows:

Once reaching rank 80, you can then start attaining Honour ranks. Here’s a sneak peek of how this will look: 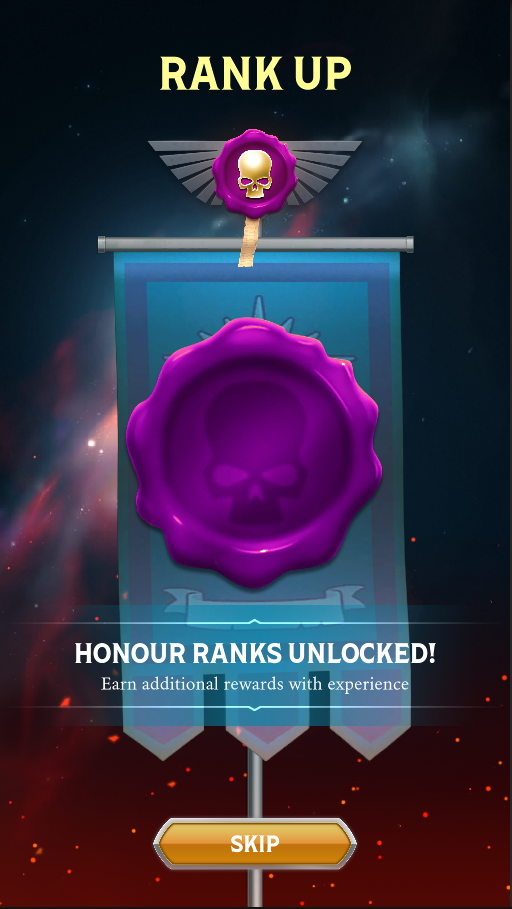 Each Honour Rank will  require 1250xp  and awards either 750 coins or 250 plasma, with the first reward being plasma.

From a more interactive point of view, your level icon and player profile will both adjust to match this:

For bragging rights, the number of times you’ve  achieved an Honour Rank is recorded on your player profile, and will be visible when anyone inspects you through a clan.

It was really important to us that all the banked experience held by players was put to good use, so when this feature is released (next Wednesday all going well), all experience will be carried over into the new ranks. So those of you who are sitting on a pile of experience at rank 71 can expect a big one-time give out of currency, with some players hitting more than 1 Honour Rank when the feature goes live.

This is the first of a few quality of life features we are really excited to be adding to the game. Whilst this first feature is catered to players in the end-game, the introduction of Trait Rank 4 (and moving traits earlier as a result) and the new improved Card Shop will mean that players at all stages of the game will see an increase in features to improve their experience and enjoyment!