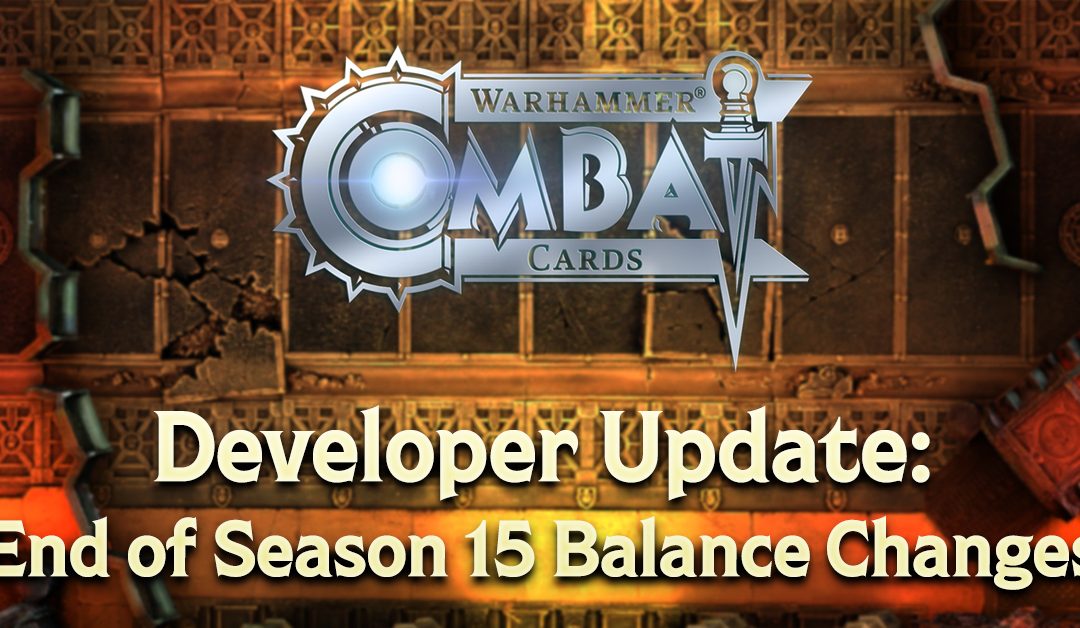 Coming into the next balance pass we’ve had a big shake up to go through: A large balance pass last season, the introduction of Psionic Blast and Inquisitor Greyfax dropping as a new warlord.

Off the back of large changes it’s always good to let things settle down a bit, and with the incoming introduction of Deathblow we may see things shift again. As such, this month’s balance pass is going to be on the smaller side.

Since introducing the new Twitch livestreams, we’ve seen even more questions on the subject of balance. With that in mind, I’d like to include more depth on the end of season analysis we go through when determining balance changes.

To start I’ll cover off the impact of the main changes from last season:

The big one was the introduction of Inquisitor Greyfax. While her play rate overall was typical for a new warlord, in Terra she made up a massive 1 in 10 games played for the whole season. Considering she wasn’t available for the whole season, that’s an unprecedented playrate. It’s encouraging to see; it shows that she is really enjoyable to play, but the other side is that her win rate was top overall in all arenas. With a warlord that has been recently released this is a clear sign that she is currently too strong, as people still havent had time to fully level her, or to find heavily optimised builds. To comment on this in general, due to the unlimited bodyguard combinations you can run with her, it’s a very hard one to balance out the gates. Hopefully people can appreciate that an adjustment is needed, without compromising what makes Greyfax such an exciting warlord to play

Next we had the introduction of Psionic Blast, which again has proved very popular, but has hit the balance pretty much bang on where we would want it to be. For the overall scoring of psychic warlords, Ahriman is on top (as he has always been historically), with a top 5 win-rate in Terra, and top 10 win and play-rate overall; all in all strong but balanced. Voldus, who has previously struggled, is now in a comfortable position in all arenas. Whilst Eldrad is still a bit below the others, he’s much closer overall to the centre of the pack. The introduction of Psionic Blast has definitely been a positive change for psychic decks and has brought them into line with a lot of other dominant builds.The additional changes we brought out this week should help equalise it further by keeping the power level roughly the same, but interacting with other traits in a healthier way. Additionally as hoped were seeing more Psionic Blast cards being included in decks other than pure psychic builds.

Worth noting are the two warlord rule changes that sparked a lot of discussion. Both Artemis and Baddrukk’s rules saw adjustments that raised a few questions, but both are sitting in a good position when looking at the data. Artemis is still struggling overall across all arenas, his winrate coming in the bottom ten, however his play rate has jumped up to third. In Terra, both his win rate and play rate are bang in the middle. Baddruk just makes the top ten for win rate and fourth for playrate, and in Terra his win rate is a bit lower, and is the sixth most played warlord. In summary it would be good to see Artemis perform a bit better in the game overall, but in the top tier of the game, both Badrukk and Artemis are performing almost exactly where we would want them.

So with that bit of analysis done, here’s the main event, being the changes for the upcoming season.

We’ll lead with the Greyfax changes:

Beyond this Warlord performance is grouped quite tightly so no other changes to Warlord rules are going to be made this pass, and similarly no changes to traits, beyond the change that went out early for Psionic Blast, which was:

Hope you all found the extra bit of analysis useful and do feel free to join the discussion on Discord: https://discord.gg/9teFN6G or join us on Twitch, where we aim to get a livestream out once a month: https://www.twitch.tv/well_played_games