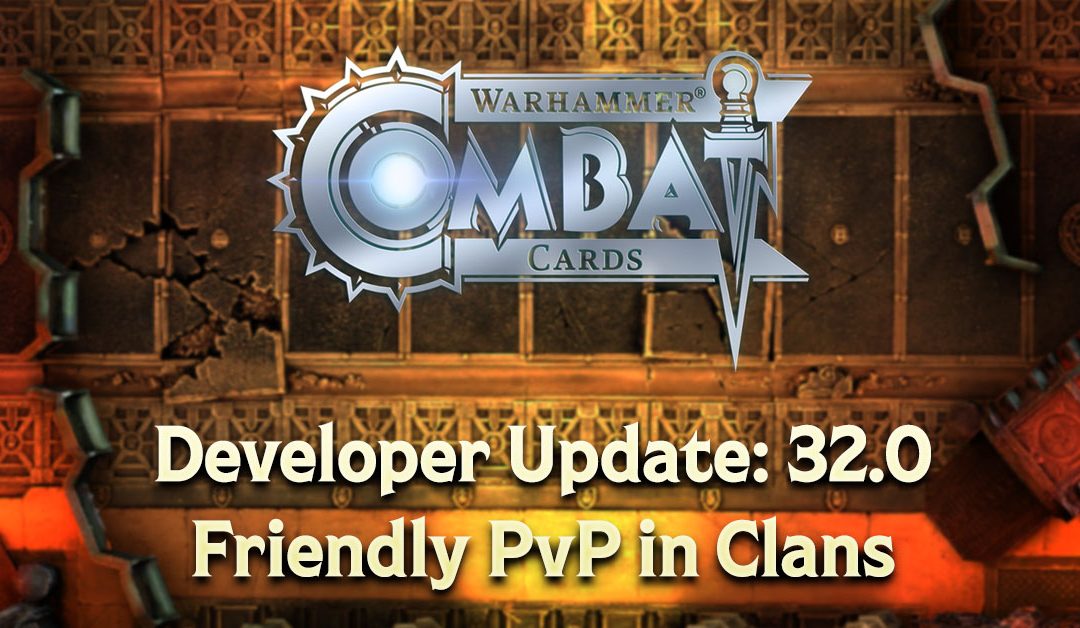 Hey everyone and welcome to another Developer Update. It’s been a little while since we’ve put one of these out but we have been hard at work on a number of things behind the scenes during this new year period and we’re really proud to bring you something that we as a team have been super excited to try and see how it performs and resonates with everyone who plays Combat Cards! Version 32.0 is now available and should be appearing your stores very soon (though note that the Friendly PvP in Clans feature will be enabled later) so let’s take a look at what the update contains.

For the longest time a number of us on the Combat Cards team have wondered what it would be like to play the game against actual players. Since its inception the game has worked on the basis that player decks are saved on our server and when you want to go to war you are matched against one of these decks, ideally providing a fun and challenging matchup. This has worked fine but as many players can attest to, the AI can make some… interesting decisions. This has lead to some cards and strategies that work well in players’ hands falling flat when saved as a deck for the AI to use as it doesn’t pick up on the nuance and tactics that were thought about when the deck was created.

There’s also something inherently more compelling about playing against an actual opponent and knowing that they’re reacting in real time to your moves, whether that’s because they think they’ve got the upper hand and make a mistake or maybe they’re cursing your name as you drop the perfect counter to their well-crafted move, and what better place to first introduce this than in Clans?

With the Friendly PvP feature you can challenge your clanmates to PvP battles and see first-hand what a player versus player fight is like in Combat Cards, and we decided that we’d start with Friendly PvP in Clans as a way of introducing PvP to everybody for a couple of reasons:

To start a Friendly PvP battle you’ll first need to set a deck. We decided to keep your PvP deck separate from other modes so you can be free to experiment without breaking up your tried and tested decks for other modes. Once you’ve set a deck you can request a battle! This will send a request into the Clan chat which another player can accept. It should be noted that your request can be active for 60 seconds, and once this times out the request will be removed automatically. Also when your request is active you won’t be able to access other areas of the game, so be sure you’ve upgraded or included the right cards in your deck before requesting a battle.

Once you’re in the game, the process is similar to what you’ve come to expect from a game of Combat Cards, particularly in Ranked mode. The one addition we’ve made to account for Friendly PvP is a timeout system.

We understand that sometimes life gets in the way of gaming so we wanted a system that is adaptable but can account for the fact that sometimes a player might just have to step away, but we also didn’t want this to impact too harshly on the player who is waiting for their opponent. You shouldn’t have to leave a game you’re actively taking part in, and so we have implemented a three strike system. If a player runs out of time when deploying a card or taking a move, they will be given a strike. This can be seen on their timer. If that strike happened during deployment then a card from that player’s hand is automatically selected and deployed for them. If a strike happens during game play, that player’s turn is skipped. No attacks, no readies, no end of turn buff, nothing. If a player reaches three strikes then they automatically count as Surrendering, which gives victory to the other player.

The time limit on turns at the moment is set quite high as we didn’t want it to be too punishing initially, but we’ll be making tweaks to the amount of time allowed to make moves based on the data and feedback we receive. We feel like this is a fair system that enables a bit of leeway with the occasional missed action but doesn’t punish the more attentive player.

Once a match is won, a result message is posted in your Clan’s chat for all to see! Now you can go back to your Clan and bask in your glory or wallow in defeat before challenging another player! Now obviously because this feature is Clan exclusive we’ve removed rewards from this mode. This friendly feature is a place for people to test out both their decks and the experience of PvP as a whole and not a place to farm rewards away from the normal game modes. Instead we’ll be looking at how we can take PvP forward if it proves to be popular, so we would encourage your feedback!

Lastly, we’ll be running a Mission later this week and you’ll need to be playing Friendly Battles to take part so if you’re not in a Clan already then now is the perfect time to join one!

Friendly PvP isn’t the only thing coming in this update! We’ve made a few small quality of life improvements to Clans as a whole to coincide with this release. The first of these is you can now see when players join and leave your Clan. This will be posted in the Clan chat for all to see along with any role changes (promotions and demotions) so you’ll be able to see a bit more activity in your Clans. To assist with this you’ll now see a notification badge on the Clan tab any time a new message is posted or Friendly PvP Battle is request, meaning you never miss anything. We have some other improvements in the area of Clan activity that we’ll be bringing in a future update.

We’ve also added a highlight to cards that you earn from your Clan’s dedication so you’ll know exactly what your dedication has earned!

Recently we did our first ever live stream of the game over on our Twitch channel. A massive thank you to everyone who checked it out, watched the new Logan Grimnar reveal, and stuck around to ask us questions while we showed off the new Friendly PvP in Clans feature. We had a blast doing it and will definitely be doing more in the future. One of our hopes for this new PvP adventure is opening up ways of encouraging streamers to engage with Combat Cards, or for us to be able to create fun events for people to take part in. We’ll be announcing another livestream soon to show off another new Warlord, so be sure to head over to https://www.twitch.tv/well_played_games and follow the channel to be alerted when we go live next!

(Note: Some of these bug fixes will be apparent to some players already due to our ability to correct certain issues without releasing a new update, but they’re worth calling out all the same)

That’s all for today’s update. We’re looking forward to seeing how you all interact with Friendly PvP and already hard at work to bring more features to the game in the coming months. We’re very excited to see where 2021 takes us!