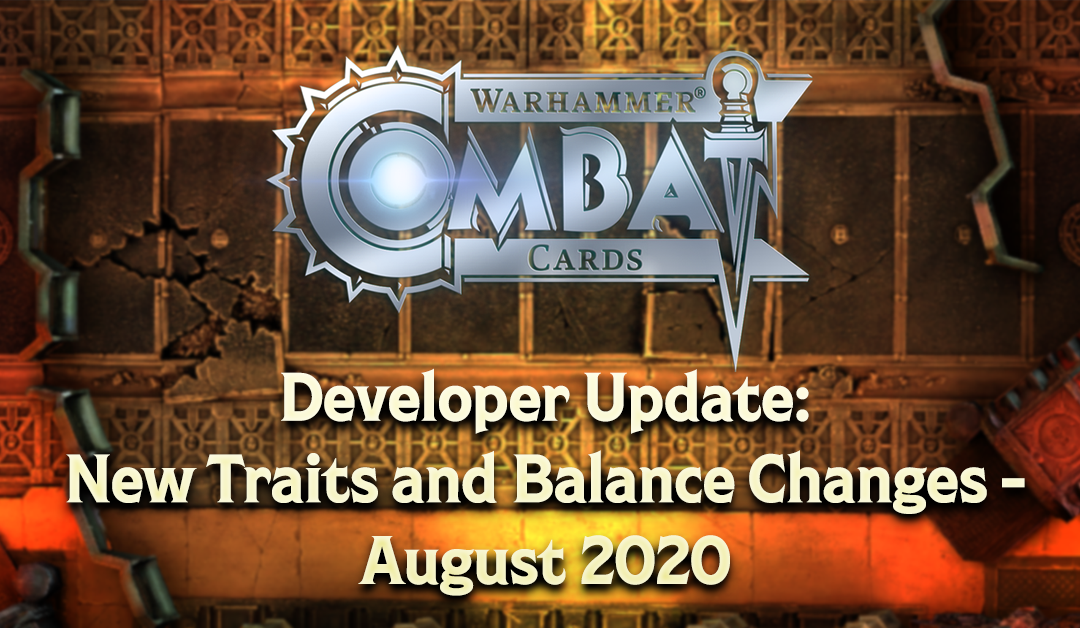 For the balance pass this Season we have a lot of content to go through! New Traits, Warlord rule changes, and a few card balance changes, as well as some other surprises releasing very soon. As well as Inspiring Presence hitting the wider card pool we have two further new traits being added which are detailed below.

For the balance changes after the number of bodyguards being adjusted last time we have focused mainly on Warlords for this pass, but a few cards have also been changed.

So we already know about one new trait coming in next Monday (03/08/20), Inspiring Presence. The two new traits are: Psychic Link and Outflank. So what do they do?

When this card is deployed it gains Psychic Link. While this card has Psychic Link it gains 7.5/15/22.5% extra psychic damage for each other friendly Psyker on the battlefield.

It’s exciting to add another passive trait at the same time as Inspiring Presence, making traits feel more diverse and adding new depth to the game. Needless to say this only applies to cards with a Psychic attack and highlights cards that work best as a team, either in the lore or on tabletop. The full list of Psychic Link cards is below:

Ahriman – Arch-Sorcerer of the Thousand Sons

Next we have Outflank, our first mechanic that ‘steals’ from the opponent.

The trait rules read as follows:

When this card is deployed, it reduces the enemy’s attack boosts by 10/20/30% and adds that amount to yours.

It should pose a really useful and interesting mechanic that debuffs all of your opponents attacks at the same time while also buffing yours. It’s also a nice counter to factions that store a particular attack type, and helps more flexible builds that like to swap between attack types.

Additionally worth noting, and part of the reason for the large list of cards with this new trait, we have made it replace any cards with debuff Scout. We felt this makes the most sense as Outflank is much more universally useful, if not as hard hitting, as a debuff Scout, and also solves the issue of one trait, Scout, doing different things depending on which card it is applied to. So on to the list:

As mentioned above, the majority of changes are to Warlord rules, so let’s start there:

Watch Captain Artemis: Ability now deals 15% of Starting wounds and so is able to kill cards with his ability.

Magos Dominus Ivasnophon: Special rule now heals +20 wounds instead of +15. Additionally his trait has changed from Regeneration to Medicae.

Commissar Yarrick: Special rule changed back to readying twice, rather than once, as this was reverted in the last change unintentionally.

Seeing as Inspiring presence is being released, and having played with some sample builds, this should more than make up for the reduction in ability; it’s needed as Tolmeron still dominates as the top picked Warlord.

Also worth noting is that Canoness Veridyan is under review currently but will not be changed in this pass.

Given the number of new traits we do not want to alter things too much with trait adjustments as well, however both Poison and Fear are under review.