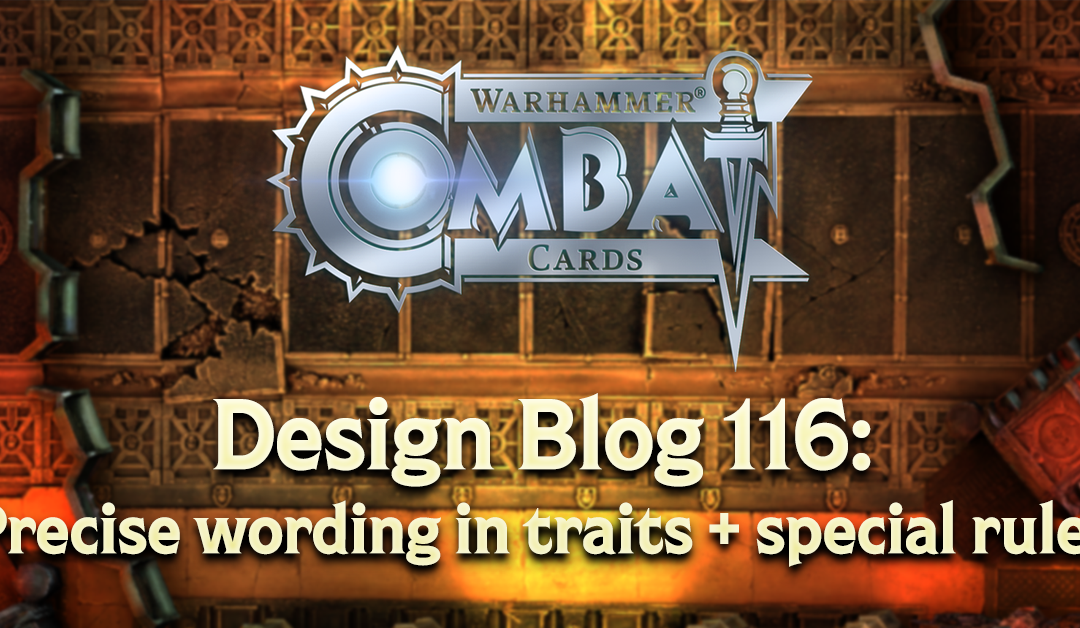 Contrary to what you’d expect, life as a videogame designer is only 50% casinos, car-chases and throwing henchmen off the Eiffel Tower. The rest of the time is spent discussing incredibly specific details about how pieces of our game should or should not work. #RockAndRoll #LivingTheDream

As a specific example, we’ve been sitting around like a bunch of lawyers discussing the exact working of how traits and Warlord special rules should work (quick catchup – traits are one-off powers triggered when you deploy cards, while each Warlord has a passive special rule that’s always active).

The reason we’ve been covering this area is that the behind the scenes rework of our battle system will soon mean:

Here’s an example: We had to decide on the precise differences between the words ‘attack’, ‘damage’ and ‘wound’ so we know what should block each of them and whether any of them cause other traits or special rules to trigger as a response. So an ‘attack’ might be when a card physically goes over and punches / shoots / brain melts another card, compared to simply dealing damage, which causes the victim’s Wounds to go down.

They might sound the same, but it’s reasonable to expect attacks to be blocked by things like the Shield trait, whereas simply taking damage may bypass the Shield. Not that I’m definitely saying that’s how things will work, by the way, just giving an example. We’ll post here once the final wordings have been agreed and some of the traits and special rules are about to change their current, possibly incorrect, behaviour.

Something else to note is that all these discussions are for us, the developers, to first agree on this stuff. That’s why we need to be incredibly precise – so whoever’s job it is to add future traits and special rules can be confident on how these edge-case interactions should work.

We won’t spell all this stuff out in such detail in the game for two reasons:

Hopefully you can see that these discussions aren’t actually about the wording we use when describing the traits / special rules, it’s us agreeing on the underlying ‘rules’ of this area of the game so we can ensure everything sticks to those rules.

I’ll leave it to you whether it’s fun spending a couple of hours deciding whether precise wording means a trait can / can’t trigger a second time if that card is ‘picked back up’ from the battlefield and redeployed later, but these sort of discussions are an important part of designing a videogame (along with the whole henchman / throwing / Eiffel Tower thing, of course).

If you have any questions or comments on this area you can get in touch by leaving a comment below, through our Facebook page or by mailing [email protected]. Also, if you’d like to follow our posts through RSS you can use this link:  https://www.combatcards.com/feed/