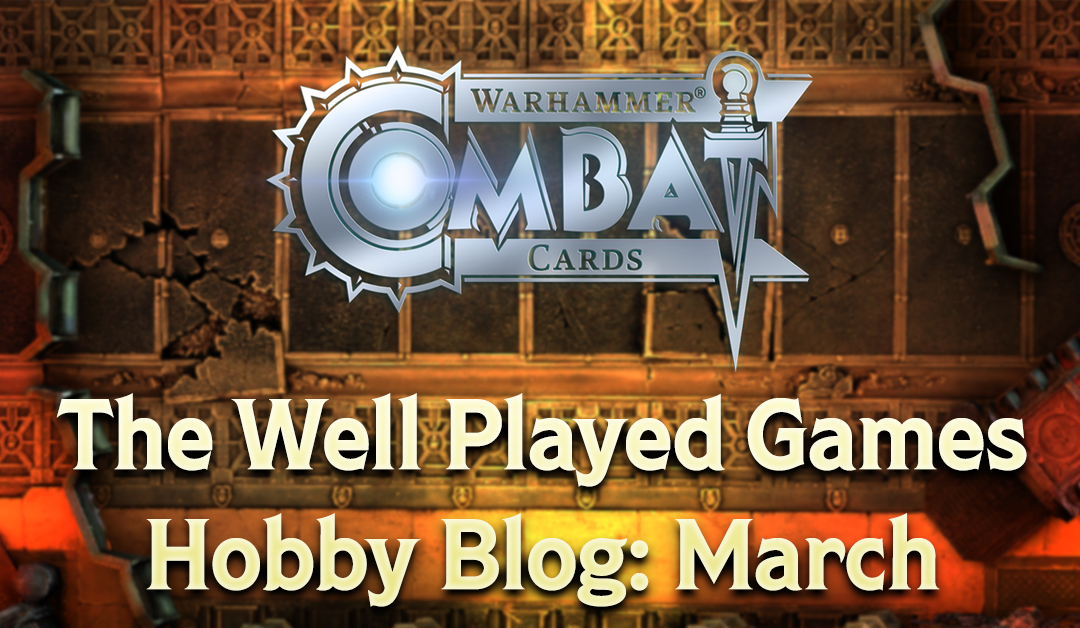 Welcome to the first installment of the Well Played Games Warhammer Hobby Blog! When we’re not busy making Combat Cards many of us enjoy dabbling in various elements of the Warhammer universe, so we figured we’d share what we’ve been up to with you all. 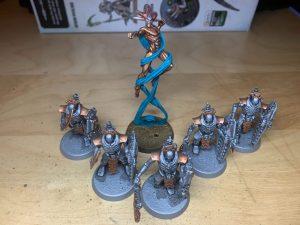 Some work in progress models!

This month has been a productive one for hobby progress for me. After finishing a number of Necron models last year for the Painting Challenge I’ve decided to expand my Dynasty even further by working on some of the models I’ve yet to paint (Trust me, there are a lot!). I made a start with a big unit of 10 Lychguard armed with Dispersion Shields and Hyperphase Swords, and a C’tan Shard of the Deceiver. I’ve had that particular model so long it’s made of metal!

I’ve also been building some more Necrons ready to prime and paint once these are finished. I’ve got a Triarch Stalker in many sub-assemblies, 5 more Immortals, and a Canoptek Tomb Stalker from Forge World. That thing has so many legs, but is such an awesome kit to pose and work with!

Outside of Warhammer 40,000 I’ve been dabbling in some Warhammer Underworlds, learning the rules and working out which gang I’ll be taking first (spoiler: it’s Rippa’s Snarlfangs. Those models are amazing!) and also playing some Necromunda with Stu! I’ll be starting a campaign in the office soon, so expect to hear more about that in the coming months. Over the next month I’m hoping to finish all of the various Necron projects mentioned so far, as well as getting my Delaque gang painted ready for the campaign. 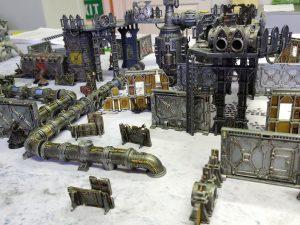 Spot the lying down in cover miniatures. First prize is you get to ban Tim from taking any more battle photos!

Deke and I are in the middle of a friendly Necromunda battle (as friendly as the Underhive gets!). I’ve played lots with my kids, but we play a simplified version – so this has been my first game with the full rules – so properly playing things like morale and injuries. It’s his Delaque against my Escher – both of us seem to be geared up and ready for close combat, but actually we’ve only traded a couple of grazing shots…so far we’ve mostly been creeping forwards behind cover or voluntarily lying down to stay out of the firing line!

At the time of writing a couple, of Deke’s guys have scurried up a ladder to take the high ground. I always found it strange that the Necromunda rules don’t give any specific advantage for elevation – and rather it seems really risky because of how easily you can get knocked off. But I think I get it now he’s up there, since it looks like the platform he’s on will naturally gives him great cover from me while he gets a clear shot on the gangers below.

The thing I’m most interested to see is how morale works. Once someone does get taken out, we’ll start having to take bottle tests and there’ll be the chance of the battle just ending one way or the other, regardless of how the battle is going. That’s always struck me as a very arbitrary end to exciting battle…so it’ll be interesting to see how it works out. 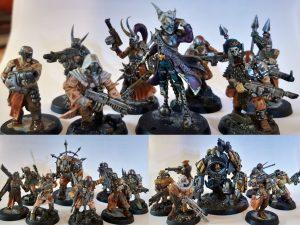 Various shots of my gang in progress.

I’ve spent most of my time painting Aeldari for a doubles tournament a friend and I are attending in May, but more on them next month. In the meantime, I’ve joined in with Necromunda, as we’re playing it in the studio and a campaign is about to start at my local wargames club.

I’ve gone with a Chaos Cult for extremely cunning reasons: Not only can I use these models as my gang they’re also being used in Blackstone Fortress and are cultists in my Iron Warriors army! So while I was tempted to make some crazy conversions for my gang, this way I get to finish some of my unpainted miniatures and it’s win-win-win for using them in games.

My concept is that the gang are escaped prisoners, hence the orange jumpsuits and stolen weapons / armour. I’ve included a Psyker, a familiar, an Ambot and a miniature to be a Chaos Spawn, because if you’re going to use a Chaos gang you might as well embrace all their fun options, even if the Psyker blows up or the Spawn eats another gang member and runs away. 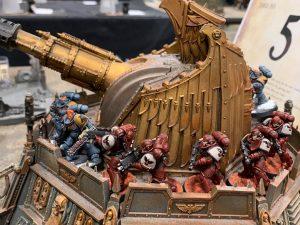 According to Emyr: ‘Ignore Haldor Icepelt sneaking his way around the far side’

This month I went on a trip to Warhammer World to reintroduce a mate to playing the game. He brought along his currently finished Blood Ravens and I took my Space Wolves infantry.

To balance the uneven armies, I created a scenario where he had to search mystery objective markers to find a specific item and survive until extraction. It boiled down to a tense brawl over one marker. He managed to fight off the Space Wolves on the last turn and it happened to be the objective he needed, scoring a victory.

As is tradition, I had to grab something from the shop. This time I came away with a Cyberwolf and Arjac Rockfist to add to my army. I’m looking forward to throwing some hammers on the battlefield. Now I just need the weather to let up so I can get some spraying done.

That’s all from the last month. We’d love to see what hobby activities you’ve all been up to! Why not show us or tell us in the comments?