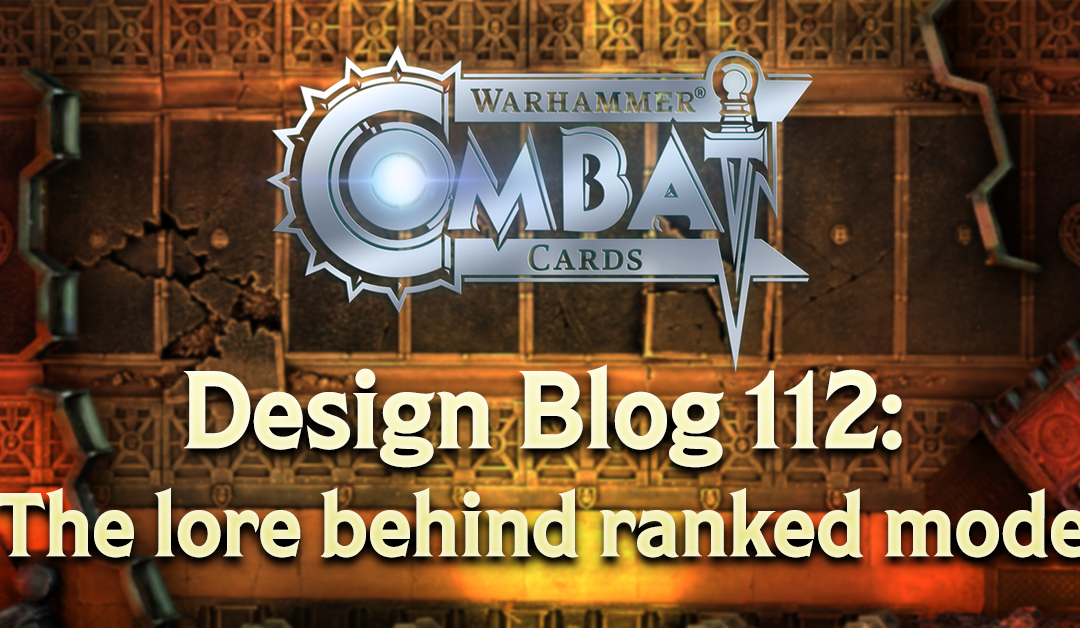 This week I thought I’d talk about lore, which for the purposes of this post is all the text in Combat Cards that doesn’t strictly pass on ‘game information’. Or to put it another way, lore, as the saying goes, is like pornography – you know it when you see it.

Now I’ve put that image in your head, I specifically wanted to talk about why we include lore in the game, especially as I mentioned it doesn’t pass on any ‘game’ information.

Let’s take ranked mode as an example. If you tap the icon to see the ladder you climb by winning ranked battles you’re told the score needed for each step of the ladder alongside the rewards you’ll receive now and at the end of the season. But alongside that you get lore – specifically around locations from the Warhammer 40,000 universe. So rather than saying ‘stage 1a, stage 1b, stage 2a’, etc. we have several locations on Fenris, home of the Space Wolves.

But the question still stands – why do we bother with the extra step of dressing these elements with lore? After all, the work to decide what to include, write the text, find appropriate artwork, request high res art from Games Workshop and their feedback on the text, and then implement all that into the game does have a cost.

It might sound mercenary, but everything we add to the game has an ‘opportunity cost’, which means if we’re working on ‘A’ then we can’t be working on ‘B’. As a result, if a piece of work can’t be shown to have some benefit to players (such as fixing a bug) or to us (such as an improved tool) then we need to question whether that work should be done at all.

But I think lore does provide a benefit; it makes this a Warhammer 40,000 game as opposed to just a card game. I mean the gameplay would work just as well if the buttons were labelled ‘attack 1, attack 2, attack 3’ and all the cards just had a number instead of art to tell them apart. Lore is the secret ingredient that ties this game into tabletop 40K and the entire 40K universe. Now when Ahriman blasts one of your cards with his special rule it’s the will of Tzeentch, and that’s not just card 0213 it’s Sly Marbo, terrifying stabby Catachan.

It also helps provides context for fans of the 40K universe. For instance, when you work out that the ranked mode ladder steps are working their way through our solar system it’s obvious that the final, most prestigious location will be Terra (and that the Emperor’s throne-room will be the last location within that).

Lore also provides context for things like the Campaigns and Missions, helping to explain why faction 1 is fighting faction 2, and occasionally letting people go ‘I remember that lore from a battle report in White Dwarf’. Again, no tangible benefit for this lore being there, but it’s always nice to know you’re helping the Sisters of Battle beat up the filthy Xenos of the Hive Fleets.

Finally, the lore on the back of the cards is there to help players who don’t know the ins-and-outs of every single 40K character by providing some info on who they are, what they’re armed with, why they’ve got a skull for a head, and that sort of thing. You might not need to know this stuff, but everyone has to start somewhere in the hobby, right?

Don’t worry, this post isn’t some bizarre cry for players to ‘appreciate the lore’! I’m confident it adds value to the game and we have no plans to strip it back. However, I would be interested to hear if anyone has any opinions on the lore we include for Campaigns / Missions, ranked mode, the back of cards, etc. Too much, not enough, needs more Skumbo? Hopefully we’ve shown by now that player opinion matters, so we’re interested to know what you think.