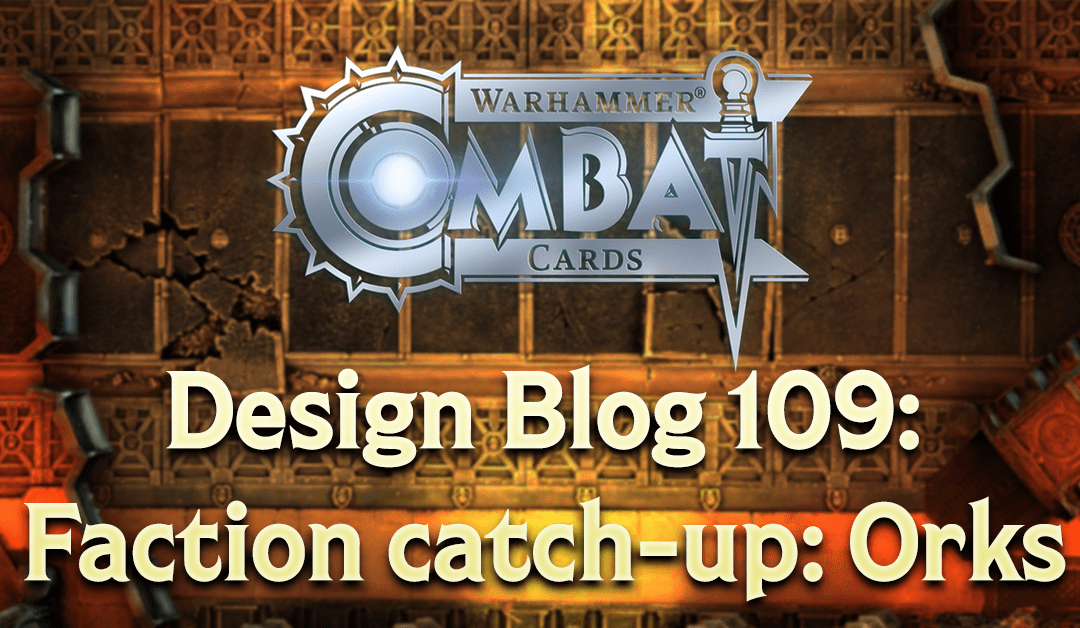 Welcome to the sixth of our faction catch-ups, this time looking at those lovable, murderous scamps, the Orks. Let’s dive straight in:

As befits tabletop Warhammer 40,000, the Orks have a high attack ratio and choose to attack over Readying 80% of the time. This reflects their Warlord special rules triggering on card deaths (more on Warlords later).

We see a split of Ork decks dealing 44% of their damage with melee attacks and 53% from ranged (with just 3% from psychic attacks, which we can’t do much about because there’s only one Ork Weirdboy miniature available for us to use). While the high amount of ranged damage neatly reflects that Ork armies are surprisingly shooty on the tabletop, the popularity of the Warlord Badrukk is likely to be what’s causing it in our game.

Orks have a large selection of cards (28), covering:

The average points cost of Ork cards is 25.4, which is pretty middle of the road. They have a reasonable spread of point costs, but this includes the most expensive card in the game (Da Mad Mangler at 99 points).

Like the Necrons, there aren’t huge amount of Ork miniatures waiting for us to add to the game, so expect future releases to include the missing Ork vehicles / units and more Ork Boyz (which will at least mean players can fill up their deck with cheap Boyz and one of the big, expensive cards).

So let’s talk about the hot topic with Orks – that they’re struggling in the current climate. Ork Warlords have a low pick rate of 8%, putting them on the bottom tier, and this is related to their low win-rate of 46%.

Obviously all balance discussions are complicated and need to take into account many factors (such as the example possibility of the problem not being the Orks as much as other factions being overpowered), but there are two areas we’re looking at:

First, when we run the next round of bodyguard point balances we’re more likely to consider lowering the cost of Ork cards over the top performing factions. This is because point changes have to reflect two aspects, A) whether an individual card’s stats are too low / high for its current cost, and B) how the faction as a whole is doing in the current meta.

This doesn’t mean that we’ll just artificially boost factions to bring them up, but if we only want to adjust the cost of X many cards in one go we’re going to tend towards helping factions that need it first.

Second, next time we make Warlord balance changes we need to boost the effectiveness of the Ork Warlord special rules. However, because their rule requires an enemy card to die to be triggered we need to make changes here in conjunction with the above point balancing, as increasing the rule potency won’t help if it never triggers.

It will be interesting to compare how Orks are getting on next time I run these faction catch-ups and once we’ve made the balance changes above (hopefully we’ll have run several rounds of changes by then!). I’d like to see  if card cost and Warlord rule tweaks can bring a struggling faction up or if more drastic adjustments are needed.