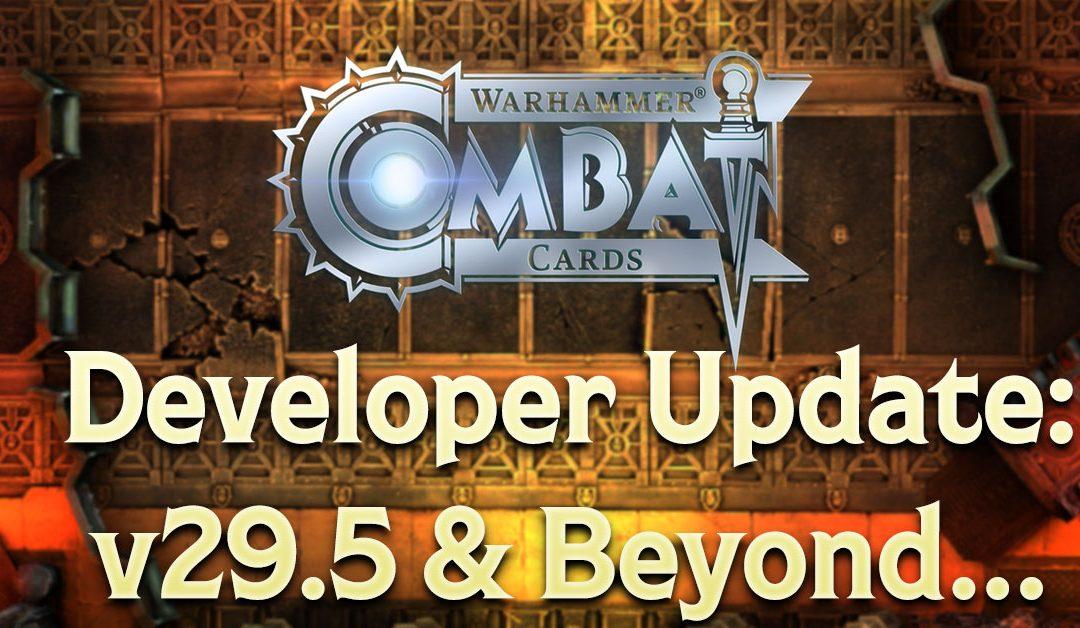 Welcome to the first Developer Update of 2020! After a very busy 2019 saw the launch of Warhammer Combat Cards, we’re looking forward to releasing a host of new features and updates over the next few months to make the game even better. Some of those will be improvements and upgrades we’ve identified, while others will be long-awaited features you’re all clamouring for. We’ll go into as much detail as we can, but some of these features are either still being designed or simply things we want to tease rather than reveal. There’s lots to talk about at the start* of a new year, so let’s start with…

Ranked has proven to be a hugely successful game mode that many players have enjoyed. In fact a total of 31,618 players have played at least one battle in ranked mode, and 3,235,555 battles have been completed with 50,220,241 trophies earned and 340 people reaching Terra in Season 1! It’s been great to see this level of engagement with the first season, and we’re looking forward to see what Season 2 shapes up like. Speaking of Season 2, there’ll be a short amount of downtime before it starts as we implement some improvements, including:

We have more improvements we will be working on during the short downtime period, including analysing matchmaking from Season 1 to ensure players can make sense of the matches they’re placed in. We will detail other improvements in a future post dedicated to Ranked.

Version 29.5 should be appearing in your app stores soon. It has quite a lot going on, although it might appear like not much has changed at first glance. Not only does it contain the aforementioned changes to the Ranked ladder and trophy reset information, but also quite a few bug fixes (more details on those later) and functionality to allow us to make some big changes to Campaign energy, which we’ll detail individually.

A frequent complaint from many of you was that starting with full energy meant that not only did the stability of the game suffer as people rushed to use all of their energy to trigger a refresh, but also that full energy meant an unfair advantage for those around the world who couldn’t start taking part at the same time as those already awake for the Campaign. We’re happy to announce that with this version we’re now able to start Campaigns with a preset amount of energy. We’ll be aiming to start the next Campaign (starting on 29/01/20) with 2 energy instead of the usual 6. This should hopefully align with most people’s playing patterns and mean that no one misses out at the start of a campaign.

Another issue we wanted to address was another time-based problem. Due to the nature of the world, our hard-working Customer Support team are active when some of you are sound asleep. Unfortunately this meant that missing energy requests were sometimes fulfilled when your Campaign energy had already refilled. This new version instead converts those Customer Support-granted energy into a separate pool of energy outside of your normal refresh times. This means that you can spend those granted energy in your own time, rather than worrying about when your request will be fulfilled!

Finally**, some backend improvements should mean that the instability seen around Campaign starts should be a thing of the past. Unfortunately some requests were taking longer than desired but with the changes made to both the backend and the Campaign energy mechanics, we should hopefully see a much more stable experience.

There are a number of features the team are actively working on, and each will undoubtedly have more detail shared in future updates but for now, we wanted to give you all a brief insight in to some of the upcoming features and improvements that the team are eager to deliver. Let’s start with the big one!

We know you’re all desperate to start up your clans and have a place to congregate within the game, and we’re very keen to get them to you as soon as possible. Clans is our top priority feature to deliver and we’re currently ironing out some finer details. One thing we can reveal in this update is that the maximum member count for Clans will be 50! We feel this is a sensible number of people to have in one clan, allowing Clan leaders to maintain a sensible member count. We’ll be announcing a release date for Clans in the near future.

We’ll share more information on when these features can be expected in future and no doubt share some previews before they arrive.

* It’s still January so it definitely counts
**Both in terms of this section and also the time it’s taken!