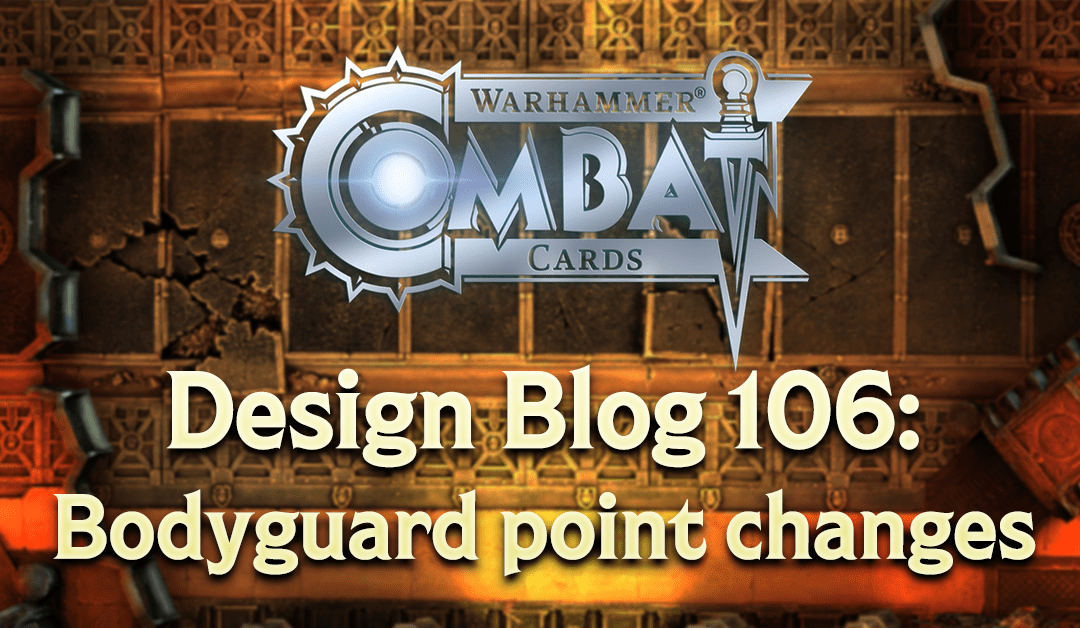 A few weeks ago we ran the first round of changes intended to help balance the game by looking at Warlords and their special rules. This achieved the desired effect of making some previously unpopular Warlords (hi there, Yarrick) viable, but we’ll be returning to the Warlords again at some point as some of them (like Fury of the Craftworld) are too effective and need further balancing.

But before that we wanted to look at which bodyguards needed boosting or toning down, so we compared several sets of data including whether a card had more or fewer ‘stat points’ when compared to other cards of the same cost.

This gave us a shortlist of offenders that most need to be adjusted, so as of next week (Tuesday unless anything changes) these cards will change points:

Arjac Rockfist, The Anvil of Fenris
Cost increased from 35 to 46 points.

Hammer of Titan, Nemesis Dreadknight
Cost increased from 54 to 69 points.

Khan’zhar the Red, Wrath of Khorne Bloodthirster
Cost decreased from 100 to 90 points.

Subject Deceased, Poxwalker of Nurgle
Cost decreased from 4 to 3 points.

We haven’t tried to address every single bodyguard in one go as that would be an overwhelming number of changes, so will be returning to balancing bodyguards in the future, after the changes have had a chance to settle down and we’ve done another pass on balancing the Warlords. Next time we’ll start looking at the cost / value ratio of the cards in each faction, which will show up over or under performing cards within that faction.

I wanted to end today’s post by talking about why we need these changes at all. I don’t mean ‘why are we balancing the game’ because hopefully that’s obvious – we want as many cards as possible to be viable choices when you’re building a deck.

I’m referring to why these cards got into the game with unbalanced stats in the first place, because we’re well aware no-one likes it when their favourite card is suddenly rebalanced (particularly when we need to rebalance a card that we’ve sold, like Longstrike). The fact that some cards have the wrong points cost is entirely my fault, but in my defense it’s a complicated problem to solve!

The point is, it’s difficult to ensure all cards are perfectly balanced, particularly in an always evolving metagame. We’ve recently changed the way we calculate points cost to hopefully tone down these issues, but it’s perhaps inevitable that some cards will slip into the game in an over or underpowered state.

Do let us know what you think of these changes and if there are any cards that you think are in need of adjustment.