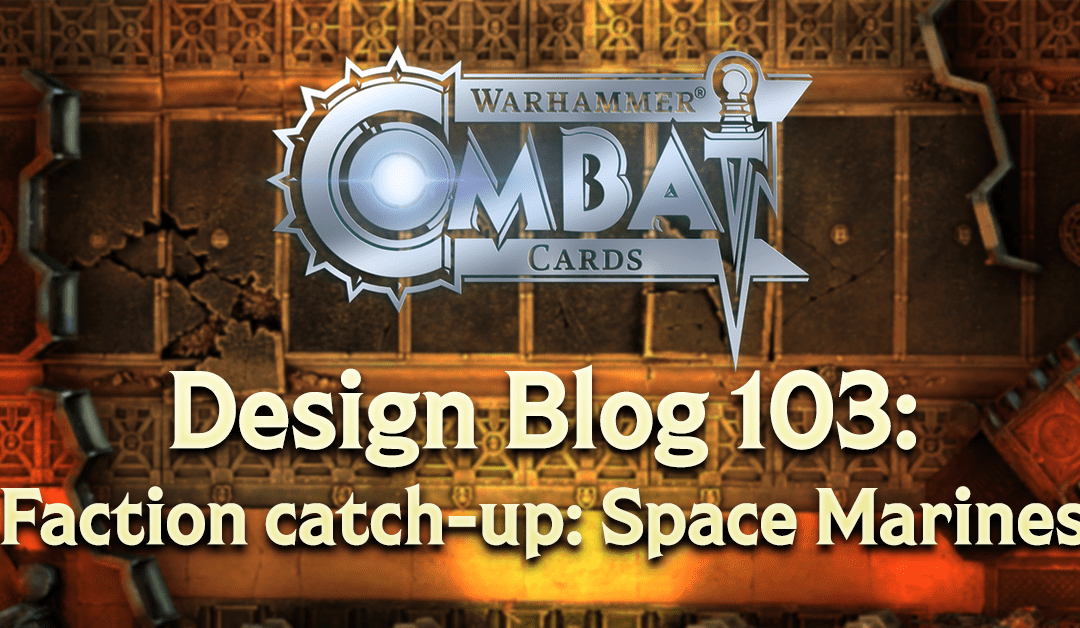 Welcome to part four of this series looking at each faction’s stats from October 2019 and their card and damage distribution, win rate, popularity and so on.

This week we’re looking at the largest faction in the game, the Space Marines. As ever these stats only count ‘normal’ battles, not Campaigns, and include any deck with a Space Marine Warlord, even if it includes Servants of the Emperor bodyguards.

So load your bolter, stare meaningfully off into the distance and try not to think about whether Horus really was right all along.

Unsurprisingly, Space Marines are the most popular faction, chosen 24% of the time, though as mentioned in previous catch-ups the fact that new players begin with a Space Marine deck skews these results slightly.

They have a reasonable win-rate of 53%, but it could be a little higher so we’ll be looking at how to improve it as part of the balance work going on. In general we aim for a win-rate of around 60%, though obviously this varies based on player Rank, whether players are using their ‘best’ decks (i.e. daily Objectives which encourage players to use certain factions mean they may be using a deck with cards they haven’t upgraded yet), and so on.

Space Marines attack (instead of Readying) 77% of the time, making them one of the more aggressive factions, which makes sense as their Warlord special rules don’t particularly reward Readying.

The faction has a pretty balanced spread of damage dealt, with melee attacks inflicting 48% of their damage and ranged attacks dealing 39%.

This is the largest faction in the game, with 44 cards broken down as follows:

This gives them a lot of Common cards (63% more than the next closest faction) but a low amount of Legendary cards. Not sure why that’s happened considering the huge number of Space Marine ‘special characters’ there are, so it’s something we’ll be addressing.

The average points cost of a Space Marine card is 24.2 which is about average for the game, though they have a huge number of cards in the 11 – 20 point range. This reflects the generally elite nature of Space Marine forces compared to the cheap cannon-fodder of the Servants of the Emperor.

We’re now halfway through our faction catch-ups, and personally I’m finding it interesting to take a step back from individual cards and look at how the factions stack up against each other.

For example, with the Space Marines we see a pretty well balanced faction with plenty of flexibility in deck building strategies. We want to get some more Legendary cards into the faction but need to be careful that these new, generally powerful so high point cost cards don’t shove the faction’s average cost up too high (as the Space Marine Warlord special rules favour larger decks, so we don’t want to work against that).

I’ll be back in a couple of weeks to look at another faction. In the meantime, you can get in touch by leaving a comment below, through our Facebook page or by mailing [email protected]. Also, if you’d like to follow our posts through RSS you can use this link: https://www.combatcards.com/feed/