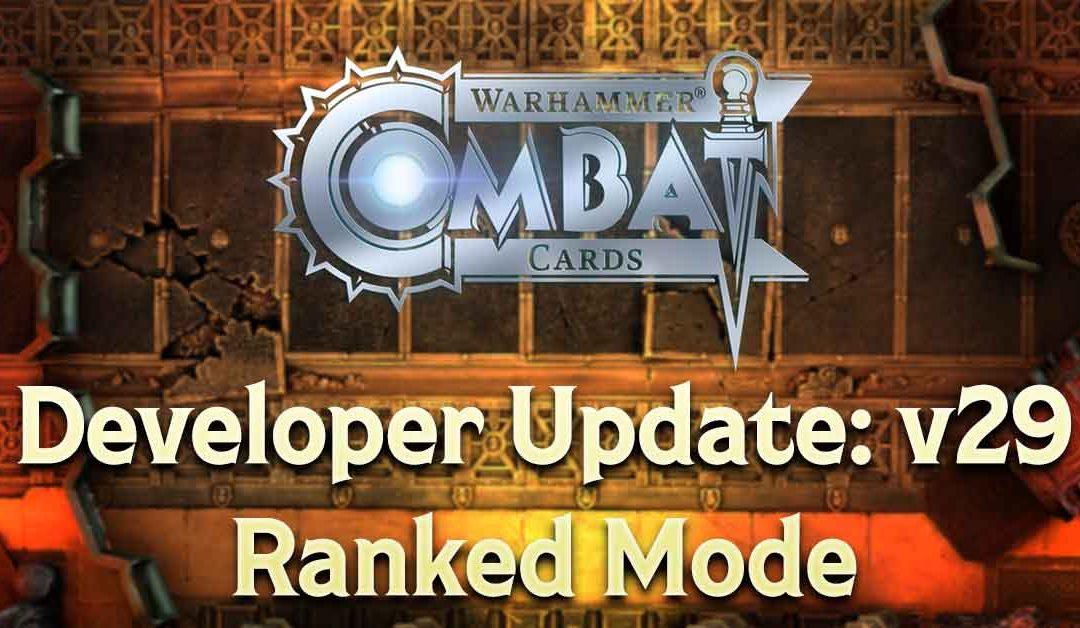 Welcome to another Developer Update. By now version 29.1 should be appearing in your app stores, and we encourage you to grab it as soon as you can. There are some some pretty big changes on the way, so let’s dive right in and explore them.

The first thing you’ll notice after updating to the new version is that the layout has changed quite significantly. There are a number of changes that have happened, but the most obvious is the moving of the ‘WAR’ button up to the new scrolling game mode window. Within this you will be able to swipe between different modes, starting with Casual Mode. This is the game as you currently know it; you can play games, collect skulls and victory packs, and try out your deck against others in a non-competitive manner, but swipe to the right and you will find the all-new Ranked Mode (once it is enabled. More on this later).

In Ranked Mode, we’ve introduced some famous locations from the Warhammer 40,000 universe for you to fight across. You will play against other players to earn trophies and progress through the galaxy as you make your way to Terra, with each planet or landmark having Sectors for you to reach. Each Sector has its own reward for you to claim.

Ooh, shiny! (Also note that these numbers aren’t necessarily representative of what you might see when Ranked Mode launches!)

Ranked Mode will run in seasons, and at the end of the season you will earn a prize based on the number of total trophies you have obtained, after which your trophies will be reduced by 50% ready for the next season allowing for each season to remain competitive. The higher the finish, the greater the prize! Your total trophy count is determined by the highest four Faction scores, so if you start to run into some tougher opponents with your current deck then you can simply try another faction to increase your total!

Tapping your trophy count will show each Faction’s current standing and the four that current make up your Total Score.

Ranked Mode is a pretty significant change for the way in which players will interact with Combat Cards, and as such this first season will be considered a ‘beta’ season and we may need to tweak numbers and visualisations based on feedback and data. We already have a number of improvements we’re planning to make ahead of the next season, including making it easier to track your current progression, but we look forward to hearing your feedback through the usual channels.

Ranked Mode will be enabled early this week in preparation for the beta season.

As mentioned in the previous Developer Update, we have made a change to the way that buffs and debuffs work in order to remove the previous diminishing returns mechanic in favour of a system that makes more sense at-a-glance. To assist in this, we’ve redesigned the bars that you see during the battle. Instead of filling up to the top and then seeming to continue up to an unseen limit, the graphical effect will now wrap over itself once it reaches each 100% to a maximum of 300%. Hopefully this visual effect will make tracking your buffs even easier.

As well as improvements to the Ranked Mode ahead of the second season we know there are certain features that players are anxiously waiting for that we will be working on, as well as things we haven’t yet revealed. We’ll have more news on plans for what’s coming next early in the new year. In the meantime, the whole Combat Cards team would like to pass on their thanks for your support of the game so far and we all look forward to bringing you more awesome features in 2020!

Head over to our in-game forums, r/WarhammerCombatCards, and Discord for discussion and let us know what you think of the new features!