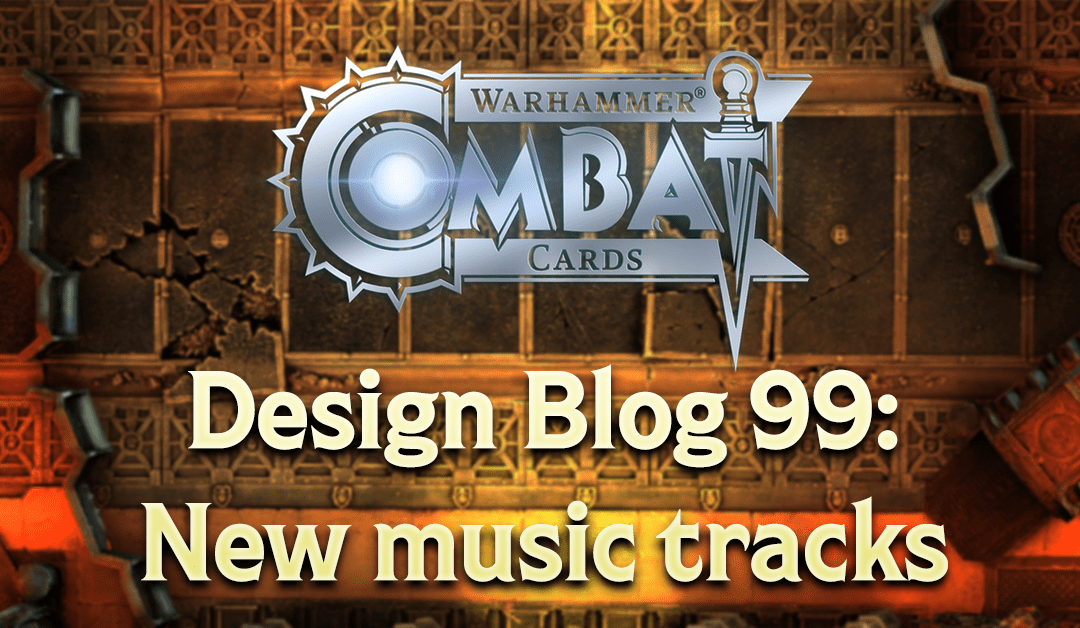 This polish will cover several areas, such as better filters when you’re editing your deck, an improved pack opening sequence, more clarity on Readying buffs / debuffs (more on this soon, too), new battlefields, and the area I’d like to talk about today – more music tracks.

As it stands, we have three combat tracks in the game, one each for our allegiances: Destroyer (Chaos + Orks + Tyranids), Imperial (Space Marines + Servants of the Emperor) and Ascendant (Aeldari + T’au + Necrons).

I wrote about those tracks a long time ago, but even back then we knew we wanted to add more, giving each faction their own music.

Well, I’m pleased to announce that an update will soon take us from three battle tracks to eight, meaning each faction will have their own. Let’s run through them:

These are going to inherit the old Imperial track, as it captures the ‘warrior monk’ aesthetic of the Space Marines and, strange as it sounds, isn’t too ‘military’. Contrast this to…

Their new track is much more in your face and regimental, highlighting that the Imperial war machine is all about huge numbers of soldiers and tanks (note the really not subtle brass and drums once the Servants of the Emperor Warlord has arrived):

This faction will keep the old Destroyer track as we felt that the use of electric guitars suited the aggressive, old-school ‘heavy metal’ feel of Chaos.

We wanted their new track to sound threatening, relentless and alien, with strange noises in the background and as the Warlord arrives a build to a feeling of inevitable doom. Here’s a sample:

The final Destroyer faction track has a similarly ‘aggressive’ feel but this time is more in your face and without subtlety. We wanted the track to have ‘electrical / mechanical / metallic’ sounds because everything the Orks make is heavy and brutal. Here’s a sample:

The Aeldari are keeping the old Ascendant track as it had a strong feeling of ethereal other-worldliness (good name for a band that). For us this fits the strange, ancient, unknowable element of the Aeldari when viewed from a human perspective.

The new Necron track feels very ‘dry’ and cold, with no warm elements, evoking dusty desert winds . We also have it feeling quite formal and stately once the Warlord has arrived, as befitting the immortal rulers of all they survey. Here’s a sample:

This is actually the final faction track being worked on by our amazing musician, so I can’t share a sample yet, but it’s mixing futuristic tech and kind of eastern influences to capture the complex themes of the T’au Empire. Their track will be in the game update with all the others so listen out for it then.

Given that music can be seen as quite a minor aspect for mobile games, why did we make the effort to add extra tracks?

I wanted to use this post to demonstrate the level of thought that goes into a game like Combat Cards, so I hope you found it interesting even if music isn’t a big deal to you. As with many elements of the game, this sort of ‘soft’ polish may not seem important but it all adds up to make a game a cool place to spend your time, so it’s something that we’re keen to get right.

Come back next Friday as we have something special planned for the 100th blog post!