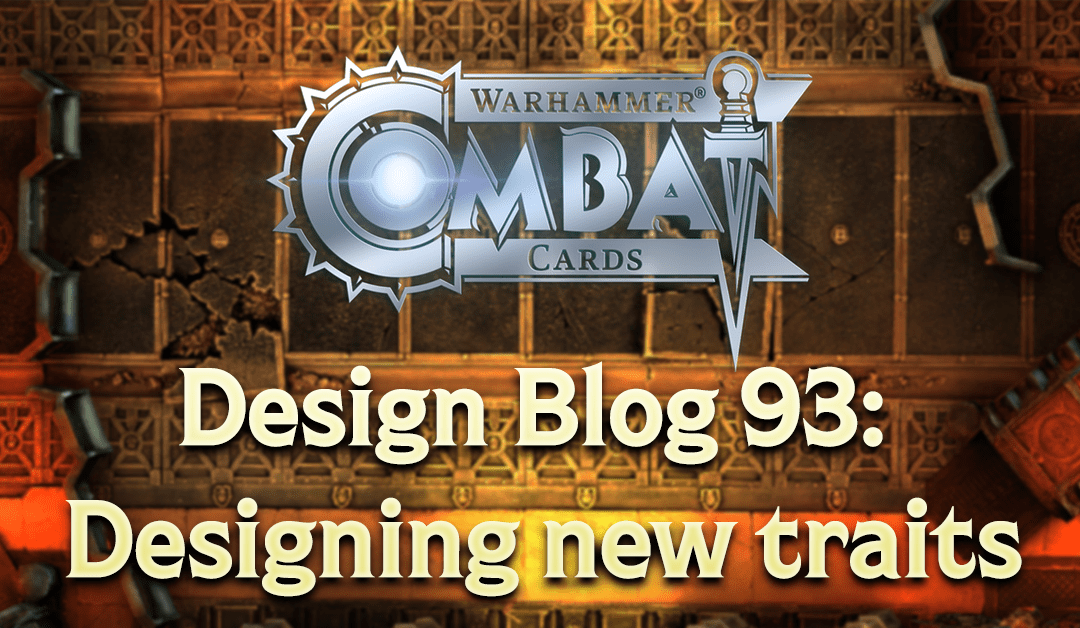 In exciting news we’re about to add some new traits to the game, and while I’ll discuss them in detail next week I thought I’d run through how we create them first.

To ensure everyone’s up to speed, traits are the one-off powers that each card uses when it’s deployed to the battlefield (as opposed to each Warlord’s special rule, which is a passive, always-on effect). Legendary cards start with their trait but all others gain it by being upgraded, and every card’s trait can be improved twice by continuing along their upgrade path.

First, why do we have traits in the game? They serve two purposes:

When we add the new traits we’re going to assign them to cards which already have a trait, and we’re aware that swapping card traits like this is going to cause disruption.

To be completely honest that’s kind of a good thing because it forces players to reevaluate the cards in their collection and perhaps try new deck builds. However, too much disruption is bad because this sort of change goes from exciting to annoying if we keep doing it. As a result we are aiming to only swap each card’s trait once over its life if possible, meaning we aren’t going to swap a card to a new trait now if we know there’s a more suitable trait for that card coming up in the future.

To know that we need to design a whole bunch of new traits (certainly enough for the next few years) and assign them to existing cards. Basically, when choosing which card has which trait we treat these theoretical future traits the same as the current ones.

Our guide with designing new traits is to focus on interesting decisions.


As a result there are some proposed new traits that we can already see being used in exciting combo’s, but other traits are more generally useful. Either way we’re looking forward to seeing how players use and abuse them!

Next week we should have a blog post detailing the new traits we’re adding and which cards are swapping to them. I have no doubt some people will be upset when a favourite tactic no longer works because a card’s trait changed, but hopefully you at least know why we’re doing this and also that we don’t want to change a card’s trait more than once.